I have to be honest, Helen of Troy (HELE) has only been on my radar for a few months. The reason it wasn’t on my radar was mainly due to the average daily trading volume, but the reason it hit the radar this summer was due to its fundamental ratings from Investor’s Business Daily. The company scores very well in both the EPS and SMR ratings. The company is getting ready to report fiscal Q2 2021 results on Thursday, October 1, and I think the company can move higher based on the overall picture for the stock – the fundamentals, the chart, and the sentiment analysis.

The El Paso, Texas-based company operates in three segments: housewares, health and home, and beauty. It manufactures everything from kitchen gadgets and storage containers to makeup and hair dryers. It is considered part of the consumer staples sector and the brands under Helen of Troy’s umbrella include Braun, Vicks, Brut, Pert, and Revlon.

The company’s management efficiency measurements are solid with a return on equity of 21.8% and a profit margin of 15.1%. The stock is currently trading with a trailing P/E ratio of 27.8 and the forward P/E ratio is 20.6.

The current economic environment is likely having a mixed effect on Helen of Troy’s sales. On the one hand, you have the kitchen storage and gadgets that are likely seeing a boost in sales with more people cooking at home. On the other hand, the makeup and home beauty segment is likely seeing sales decline with people not going out and not going to work. Once the pandemic restrictions are lifted and consumers return to a more normal life, these two segments may see a reversal of fortune.

The weekly chart for Helen of Troy shows how the stock has been steadily climbing over the last few years. In the second quarter of 2018, the stock was trading down around the $85 level and it is now trading right around the $200 level. 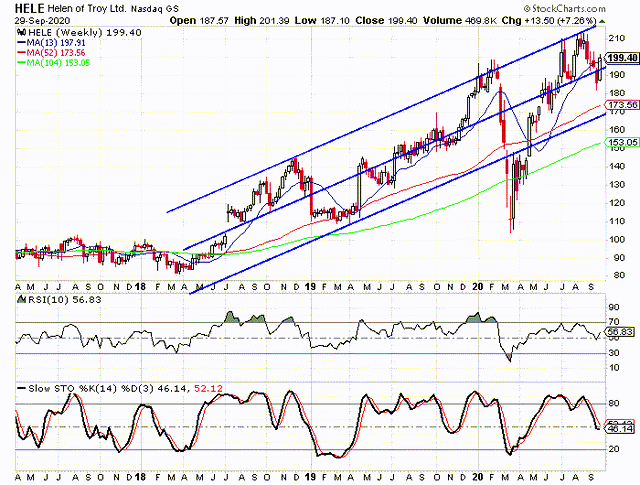 The channel that I drew on the chart is designed to show the standard deviation channel. StockCharts doesn’t offer that drawing tool, but I attempted to draw one based on another site that I use. We see how the stock has stayed pretty close to the regression line with the exception of the first quarter of this year.

The stock went through a four-week pullback in the past month, but appears to be rebounding in the current week. The pullback did move the stock out of overbought territory based on the weekly stochastic indicators. Those indicators are right around the 50 level at this time and could be making a reversal at this point. We saw similar reversals at the midway point of the range in the fall of 2019 and also in the fall of 2018. There does appear to be some seasonality to the stock with the third quarter seeing selling and the fourth quarter showing rallies over the last three years.

Short-Sellers are Unbelievably Bearish on the Stock

When I started laying out the data to write this article, there was one specific indicator that jumped out to me – the short interest ratio. The ratio is currently at 16.95 and that’s one of the highest readings I have seen for any stock recently. The ratio has quadrupled in the last six months as short interest has nearly doubled while the average daily trading volume has declined. 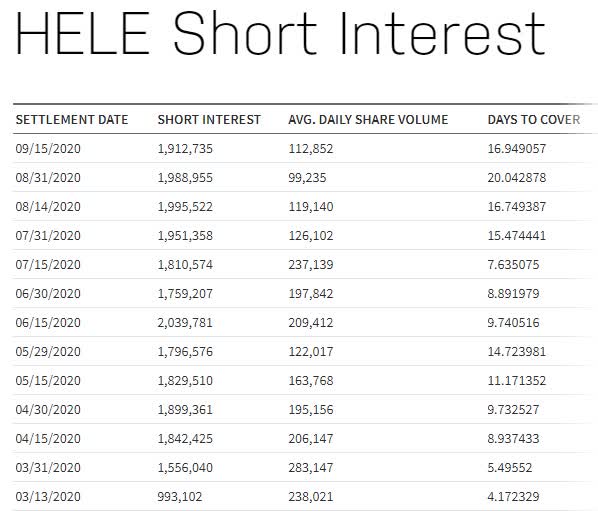 Analysts are pretty bullish on the stock, at least the few that are covering it. There are only five analysts with ratings on the stock and all five have it rated as a “buy.” Normally, I would be concerned about 100% of ratings being buys, but because there are only five, I view it more as a sign that the stock is flying below the radar of many analysts. 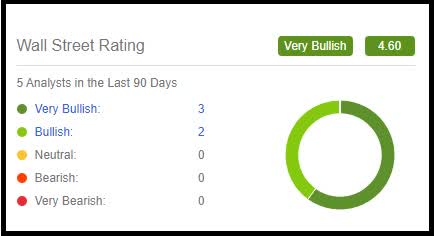 Like the analysts’ ratings, the put/call ratio is showing a rather bullish reading, but there is a catch. There are 901 puts open and 1,716 calls open at this time. That isn’t very much open interest when you consider it only represents 261,700 shares of stock. The ratio is considerably lower than the average stock at 0.525, but with so little open interest, I’m not sure it is relevant.

As a whole, I would consider the sentiment to be bearish due to the short interest ratio being so high. Sure, the analysts’ ratings and put/call ratio are leaning to the bullish side, but the figures are so small in both cases. The high short interest ratio could help the stock if it continues to rally. As the stock price rises, short-sellers can add buying pressure as they have to cover their positions.

My Overall Take on Helen of Troy

Helen of Troy is one of those parent companies that few people are familiar with, but they recognize the underlying brands. I think most of us are familiar with Revlon and Vicks at least. This anonymity for the company could be part of the reason the stock gets so little coverage, but it could also be the low trading volume as well.

Regardless of why it gets so little coverage, I am bullish on Helen of Troy. The company has performed well with earnings and revenue growing steadily in recent years and with good management efficiency measurements. The chart shows a stock that has trended steadily higher over the last two and a half years and hasn’t been very volatile with the exception of the first quarter this year. I have said this about other stocks and I will repeat it with regard to Helen of Troy – the first quarter of this year was panic selling. Investors sold everything as they tried to figure out how the COVID-19 virus would impact different aspects of the economy.

The short interest ratio being so high is the icing on the cake for me. As a contrarian, I love seeing stocks with solid fundamentals, an obvious upward trend on the chart, and a hint of pessimism from the sentiment indicators. That pessimism suggests to me that the stock can continue rallying as bears become bulls. As I explained above, short-sellers become buyers when they go to cover their positions.

I look for Helen of Troy to rally over the next three or four months, as it did last year. I don’t think investors have to buy the stock ahead of time, but with the short interest ratio being so high, I can’t see the stock dropping very sharply after earnings. If anything I think an upbeat earnings report sends the stock higher.

If you would like to learn more about protecting and growing your portfolio in all market environments, please consider joining The Hedged Alpha Strategy.

One new intermediate to long-term stock or ETF recommendation per week.

One or two option recommendations per month.

A weekly update with my views on the market, events to keep an eye on, and updates on active recommendations.