Fueled by chronic undervaluation despite the solid financials and a rich pipeline, Alexion Pharmaceuticals, Inc. (ALXN) has frequently been the subject of acquisition rumors as investors demand a sale of the company. Management has revised up the 2020 revenue guidance twice over the past three months, but the shares have underperformed the broader market in the year so far. The top line growth continued unabated even through a raging pandemic, and margins have also held up. The rivals are challenging the prospects, but proactive measures are in place to neutralize the threat.

The current NTM EV/EBITDA multiple stands at a sharp discount to the historical average, which, along with our conservative EBITDA forecast, based on revenue assumptions in line with the past, indicates an undervalued stock. Meanwhile, the strong cash flows and net cash position have attracted acquirers looking for growth at a cheap valuation. Amid acquisition rumors, we therefore turn “Bullish” on the stock as management’s renewed commitment to buybacks supports the shares.

Persistent undervaluation and investor demands for a sale have once again seen Alexion becoming the subject of a possible acquisition. A potential target of Amgen (AMGN) in 2019, the company has triggered interest from Biogen (BIIB) last month as the activist investor, Elliott Management, calls for a sale of the company questioning its strategic direction. Their logic is not without merit. Targeting ten product launches by 2023, the company is currently advancing twenty development programs, up from only four at the end of 2017. Since 2017, the top line has jumped ~55.9% through the LTM (last twelve-month) period, while the net income nearly doubled. Yet, the stock has dropped ~6.0% over the period, underperforming the 58.2% gain in the NBI (NASDAQ Biotechnology Index). 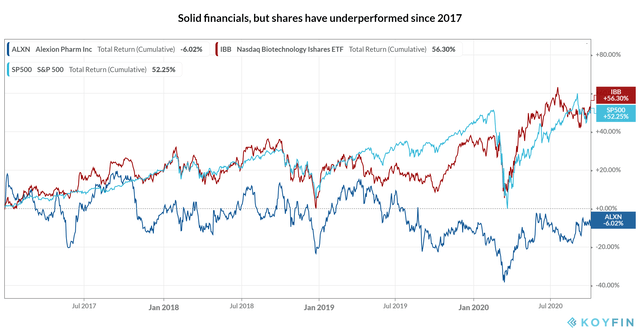 Over the past four quarters, the quarterly revenue has expanded by more than a fifth from the corresponding period last year. The Q2 2020 (second quarter of 2020) growth approached ~20.1% even as the raging pandemic restricted in-person sales visits in the U.S., where more than half of Alexion’s net product sales originate. The perceived resilience has seemingly encouraged the management to lift the previously issued 2020 revenue guidance twice in the past three months alone. The most recent adjustment of ~$200 million indicates a ~15.7 YoY growth for the year and only a ~9.0% YoY growth for the second half of 2020 (2H 2020). Yet, it still reflects a sharp slowdown from ~23.3% YoY in the first half and ~23.1% YoY growth in the LTM period.

Another Revenue Beat is Likely

Management cites the pandemic’s impact, causing a potential fall in treatment compliance, and a slowdown in new patient starts, while rising unemployment changes the payer mix. However, even though the widespread lockdown measures in 1H 2020, the revenue momentum continued. Despite the fears of a second wave of contagion, the rate of new infections has yet to reach the peak seen in late July, and with employment on the rise, the payer mix should revert to normal. Meanwhile, as competition mounts against Soliris, the company is fast converting its patients base to the newer drug, Ultomiris, achieving 70% conversion in the U.S. for PNH (Paroxysmal Nocturnal Hemoglobinuria) six months ahead of the target. The recent approvals for Ultomiris in the EU and Japan for aHUS (Atypical Hemolytic Uremic Syndrome) should support the 70% conversion target sought for that indication too.

Improving the patient convenience with at-home administration, the subcutaneous formulation of Ultomiris is gearing up for regulatory approval next year for both indications. A Phase III trial has already generated positive data, and FDA and EMA submissions are likely in Q3 2021. Until then, the high-concentration IV (intravenous) formulation that cuts the infusion time by 50% should support the market expansion as the company seeks FDA and EMA approval in 4Q 2020. Furthermore, Alexion’s neurology franchise highlights the company’s long-term prospects. Targeting ~20K, ~15K and ~5K patients in the U.S. alone, Ultomiris is undergoing Phase III trials for gMG (Generalized Myasthenia Gravis), ALS (Amyotrophic Lateral Sclerosis) and NMOSD (Neuromyelitis Optica Spectrum Disorder). With Soliris already approved for gMG and NMOSD, the conversion to Ultomiris will accelerate the targeted four-fold increase in neurology patients by 2025.

The current consensus estimates for Alexion’s 2020 top line stand at ~$5.6-5.9 billion, reflecting only an ~11.4-17.8% YoY growth. Given the company’s long history of revenue beats and the top line resilience shown in the first half despite the pandemic, we expect its revenue momentum to continue, as indicated by the second upward adjustment to management guidance for 2020. With a ~$5.9-6.0 billion of revenue estimate for 2020, our projections reflect ~17.7-20.2% YoY growth for the year. 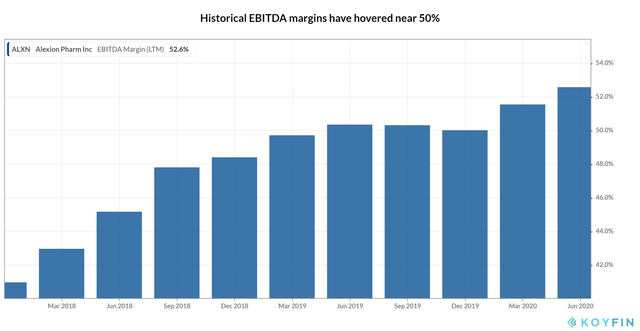 In terms of NTM (next twelve-month) EV/EBITDA, Alexion currently trades at ~7.1x, implying a discount of ~25.9% to the past three-year average of ~9.6x, which, along with our EBITDA forecasts, suggests an undervaluation of ~13.8-18.4%. With a gain of only ~6.6% in the year so far, well below the ~15.9% rise in the NBI, the stock’s lackluster run this year further reinforces its potential for upside as acquisition rumors – most recently linked to Biogen – flare up. 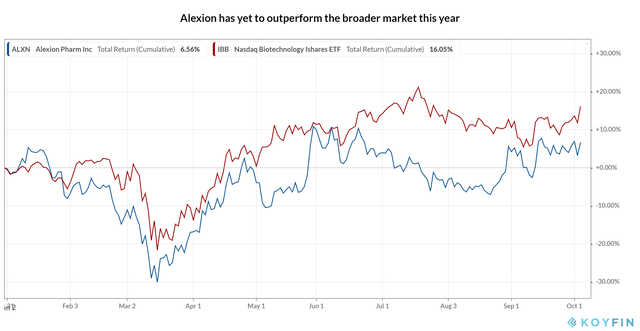 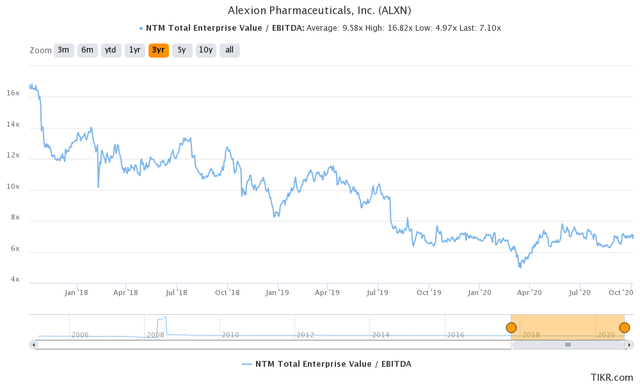 With strong cash flows and liquidity, Biogen is well-positioned to hunt for lucrative M&A deals as its best-selling drugs face competition. Tacfidera, accounting for more than a third of product revenue, has encountered patent challenges from generics. Accounting for nearly a fifth of sales, Spinraza, the first FDA-approved therapy for spinal muscular atrophy, battles low-cost competition. With strong sales growth supporting the net cash position and rich cash flows, undervalued Alexion could provide the next big catalyst for Biogen to spur its stagnating revenue growth.

As the shares trade well below the potential, the company’s persistent commitment for share buybacks indicates an efficient use of capital as well as strong cash generation in the years ahead. From 2021 to 2023, a third of free cash flows will be spent on share buybacks, according to management – a potential tailwind for share price gains as the share count drops.

However, the signs of a slowdown haven’t completely diminished as rivals target rare diseases in the face of the growing threat of generics. The company’s largest source of revenue, Soliris, once the only FDA-approved therapy for PNH, is coming under competitive pressure. Seeking regulatory approval in Q4 2020, Apellis Pharmaceuticals, Inc. (APLS) has already submitted a marketing application in the U.S. and Europe for pegcetacoplan for the indication. Novartis AG (NVS) is currently advancing a Phase II study for LNP023 as monotherapy for PNH. In August, it announced positive data from a Phase II study for LNP023, as an add-on therapy to Soliris. A Phase III study is planned for later this year, eyeing an FDA submission for approval in 2023 and a market launch 2024. Meanwhile, the generics of Soliris are also preparing to make a market entry as early as 2025. However, the company can keep the rivals at bay as the Ultomiris conversion continues at a brisk pace.

The pivot to less rare diseases is another strategy to neutralize the impact. With tens of thousands of patients in the U.S., indications such as gMG in the neurology franchise are a case in point. Despite a target of a four-fold rise in patients by 2025, the number of neurology patients in Q2 2020 has only increased by ~8.8% QoQ (quarter over quarter), contrasting the double-digit growth over the past two years. However, company management claims to have already accomplished 10% of the target.

Alexion has just revised up the revenue guidance for the year, but there is more room for growth given its resilience in the pandemic. A promising pipeline has failed to lift the stock meaningfully, and with strong cash flows and a net cash position, the company looks ripe for acquisitions. Based on the average NTM EV/EBITDA in the past, our revenue estimates and EBITDA margins in line with historical data highlight the undervaluation. The competition can, however, threaten the double digit-growth, but proactive measures are in place to sustain the momentum. Buoyed by management’s steadfast commitment to buybacks, we, therefore, turn “Bullish” on Alexion as acquisition rumors lift the stock.

If you enjoyed this article and wish to receive updates on my latest research, click “Follow” next to my name at the top.