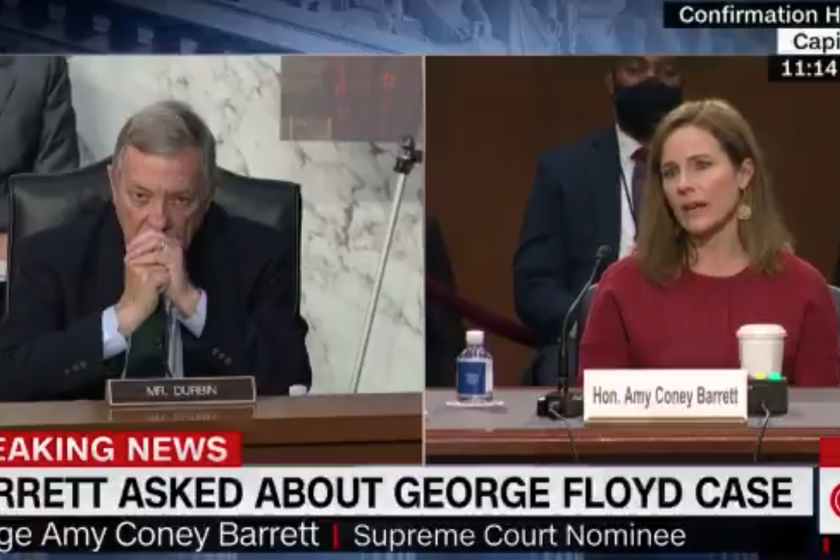 Sen. Dick Durbin (D-Ill.) used his time questioning Amy Coney Barrett to touch on a big topic in America and the law: racism.

During her Tuesday confirmation hearing, Durbin asked Barrett whether she had seen the video of George Floyd’s death at the hands of Minneapolis police, and how it affected her. “Given that I have two Black children, that was very, very personal for my family,” Barrett responded, referring to her two children adopted from Haiti.

Barrett’s husband Jesse had taken her boys on a camping trip, but Barrett was home with her 17-year-old daughter Vivian, who is Black, as “all of this was erupting,” she said. “It was very difficult for her; we wept together in my room,” Barrett continued. “To understand there would be a risk to her brother or the sons she might have one day, of that kind of brutality, has been an ongoing conversation.”

It was difficult to “try to explain” the incident to her 10-year-old daughter who was also home, as her children “have had the benefit of growing up in a cocoon where they have not yet experienced hatred or violence,” Barrett continued. Durbin then asked her to explain “where are we today when it comes to the issue of race. Barrett responded by saying it’s “uncontroversial and obvious” that “racism persists in our country,” but would not go further into what she called “hotly contested policy questions” about race.

Amy Coney Barrett says the George Floyd shooting was “very personal” for her family and her two adopted Black children. “Giving broader statements … about the problem of racism is kind of beyond what I’m capable of doing as a judge.” https://t.co/pq94T5w9r9 pic.twitter.com/C4WaMJqwZr

More stories from theweek.com
The Supreme Court deal is done
The winning re-election argument Trump could have made
Trump is shockingly bad at this