Oil prices have come under pressure again, dampening the outlook for oil producers. But Apache Corp. (APA), which has a diversified asset base, will still generate free cash flows. The oil price environment, however, continues to look uncertain and prices may remain weak and volatile. In this backdrop, investors should take a closer look at some of the risks, specifically those related to Apache’s high debt load and development of the major project in offshore Suriname. 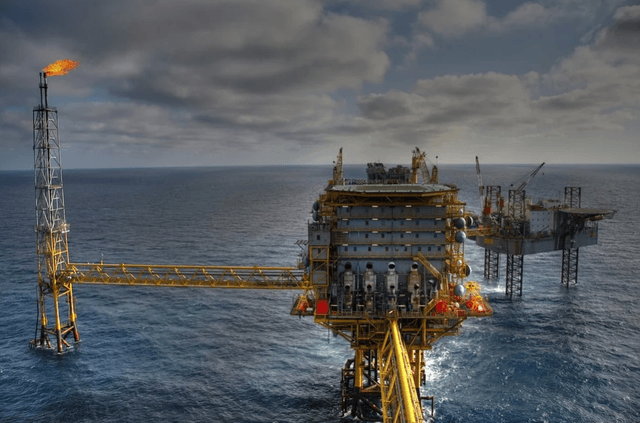 Oil prices crashed in 2Q20, averaging just $28 per barrel in the period, but recovered in the subsequent weeks to more than $40. Until the start of this month, it seemed like the commodity was on track to climb to mid-$40s. But mounting concerns related to weak demand pushed WTI crude oil’s future settlement price to $36.76 this month and was hovering around $39 at the time of this writing.

This has dampened the outlook for oil producers, particularly those who needed oil prices of more than $40 per barrel to generate profits and free cash flows. But I think Apache can continue generating decent returns. What I like about Apache is that it has a highly diversified asset base, unlike a vast majority of exploration and production companies that mainly pump shale oil from various onshore plays in the US. Apache not only operates in the US but also gets a large chunk of its production from international markets, primarily conventional oil output from Egypt and the UK North Sea. This gives the company flexibility in capital allocation decisions. In a healthy oil price environment, with WTI trading well above $50 per barrel, it can generate strong returns from all of its assets. During down cycles, the company can divert capital from the high-cost US business to the high-margin international operations.

Apache’s ability to reap strong margins from the international business was evident from its second-quarter results. The company reported operating cash margin (average price realized minus cash operating costs) on a per unit basis of $13 for Egypt, $10 for the North Sea, and $5 for the US business. Remember, Apache sold its crude oil in the international markets at an unusually large discount of $5.50 per barrel below the benchmark. This was attributed to the extraordinary pressure on prices in the second quarter due to the excess supply in the region. Under normal conditions, the company’s cash margin from Egypt and the North Sea would be much higher. Following the improvement in market conditions since 2Q20, Apache has confirmed that the international prices have now reconnected with the benchmark. Therefore, I expect this discount to normalize from 3Q20. 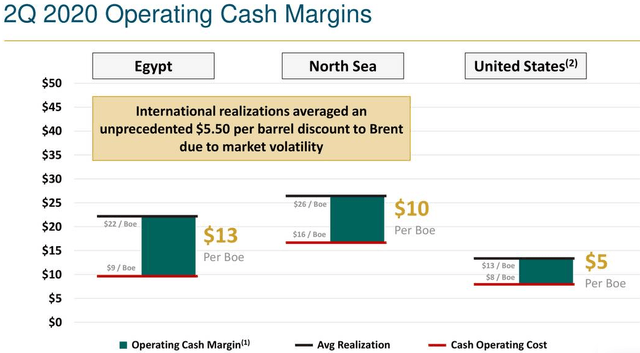 If oil prices stay in the $30 to $40 per barrel for an extended period, then the company will mainly focus on producing oil from Egypt, where it has ample downside protection from weak oil prices due to the structure of the production sharing contract. Apache is the country’s biggest oil producer and leaseholder, with several years’ worth of drilling inventory. But in a better oil price environment of more than $40 per barrel, the company will carry E&P work in Egypt as well as the North Sea. Both of these projects have a low-cost profile and their output gets sold at Brent-linked prices, which typically trades at a premium over US oil, allowing the company to capture superior margins than the US onshore shale oil producers. If oil prices improve to more than $50 per barrel, then I expect Apache to ramp up activity in the international markets and start deploying rigs at the Permian Basin. The company took the unprecedented step of suspending all drilling and completion work in the onshore US oil fields. Apache worked with an average of seven rigs in the US in 2019 and Q1-2020, all of which were deployed in the Permian Basin. But it brought the rig count to zero by mid-May. The company might keep drilling activity subdued at the Permian Basin until oil climbs above $50.

By focusing on the low-cost assets, targeting $300 million of annualized cost cuts (around $225 million earmarked for 2020), and by slashing this year’s upstream capital budget by 55% to the range of $1-$1.2 billion, Apache has brought its cash flow breakeven point lower. The company is now in a position to balance cash flows at $30 oil during H2-2020. This means that in the current high-$30s to low-$40s a barrel oil price environment, Apache will likely deliver free cash flows. It also helps that the company has already spent most of this year’s capital budget. I expect the company’s cash outflows as upstream capital expenditures to decline sharply from $658 million in H1-2020 to $342 million in H2-2020, which will enable the company to generate free cash flows.

The oil price environment, however, continues to look weak and volatile. The recent dip in prices was driven by the demand concerns fueled by the threat of a second wave of coronavirus. Many countries around the world are struggling to contain the pandemic. India, one of the world’s largest crude oil consumers, is seeing a record number of new infections. Some reports indicate that the coronavirus could be staging a comeback in Europe, with the UK recently warning that it is near a “tipping point” as new cases arise. Some parts of the United Starts are also seeing an increase in cases. Although WTI has recovered after falling close to mid-$30s a barrel last week, we are not out of the woods yet and the path ahead looks difficult. This might be a good time to consider some of the key risks associated with Apache.

I think Apache’s biggest weakness is that its financial health is not in great shape. The company carries above-average levels of debt. It ended the second quarter with a total debt of $8.8 billion (including $493 million of debt associated with its Altus subsidiary), which is so large that it has pushed its shareholder equity into the red at negative $1.63 billion.

In my opinion, the debt currently appears manageable, considering the company is working to eliminate its near-term debt. In August, the company offered $1.25 billion of notes in two tranches ($500 million of 4.625% notes due 2025, $750 million of 4.875% notes due 2027) and plans to use the proceeds to repay near-term debt, reduce outstanding borrowings on the credit facility, and for general corporate purposes. In its September presentation, Apache has confirmed that it will call all of the 2021 bonds in November, which means the company will have just $377 million of near-term debt maturities (due in 2022-23). The remaining debt will mature from 2025, which gives the company ample time to devise a debt reduction plan. 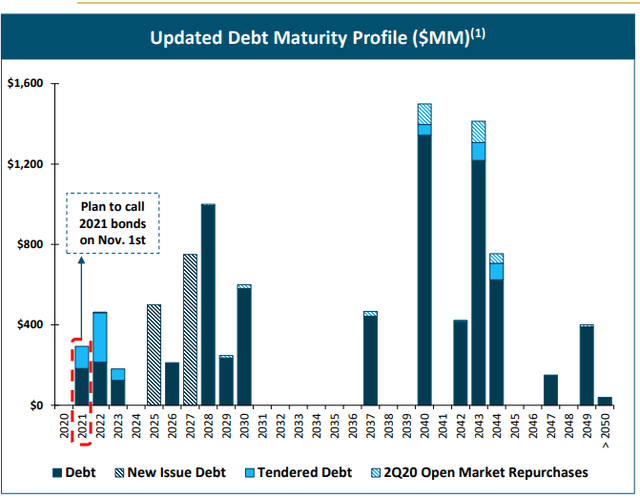 Still, the high levels of debt will weigh on the company’s performance and limit its ability to withstand the downturn for an extended period. If, for instance, the company witnesses an unexpectedly weak oil price environment and starts burning cash flows, then it might borrow funds from the revolving credit facility ($3.1 billion currently undrawn), which will further stretch its balance sheet and push leverage even higher.

Moreover, there are some risks associated with the company’s major offshore project located off the coast of Suriname. Apache is developing this asset through a 50-50 joint venture with Total SE (TOT). This offshore field, called Block 58, looks promising, considering it is located right next to Exxon Mobil (XOM) and Hess Corp.’s (HES) highly-coveted Stabroek Block in offshore Guyana that holds more than eight billion barrels of potential oil-rich reserves. Block 58 spreads over 1.4 million acres in water depths ranging from less than 100 to more than 2,100 meters. Apache has announced three major discoveries so far, which lays the foundation for additional exploration and appraisal work. 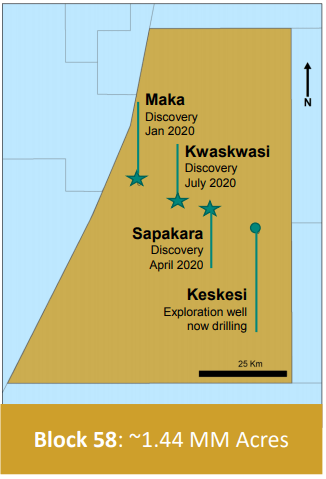 Although Apache has been plowing capital into offshore Suriname, this project won’t make any positive impact on the company’s earnings or cash flows because it is still in the early stages of development. For a project of this size, it could take around four to five years before the first production starts to flow. Any operational, regulatory, or environmental issues can further delay the field’s development.

Moreover, a major risk with Block-58 is that it might not turn out to be as promising as the Stabroek Block. So far, Apache hasn’t disclosed anything other than that it has encountered a hydrocarbon reservoir. This shortage of information can fuel speculation and might make investors nervous, particularly since Apache has a poor track record of over-promising and under-delivering. The company previously touted the Alpine High play located in the Permian Basin as a key driver of production, earnings, and cash flow growth, only to later scale back all drilling activity after revealing that it can’t profitably produce oil and gas from this region with low commodity prices. Apache can, however, dispel all concerns by announcing an oil-rich reserve estimate in the coming months. The company will then likely lay out a detailed development plan.

Shares of Apache Corp. have fallen by 33% in the last four weeks but the stock could recover if oil prices improve and the company delivers free cash flows, reduces debt, and releases positive updates from Block 58. But I wouldn’t recommend buying Apache stock at the moment since its shares are currently trading 7.41x in terms of EV/EBITDA (forward) multiple, above sector median of 7.4x and the company’s five-year average of 6.9x, as per data from Seeking Alpha Essential.