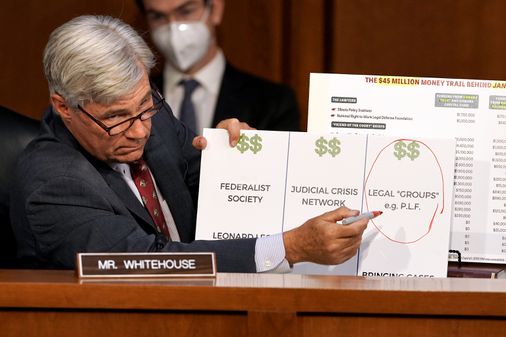 Senator Sheldon Whitehouse of Rhode Island used the time allotted to him for questioning of Supreme Court nominee Amy Coney Barrett to make an expansive argument about conservatives’ activist efforts to influence the judiciary.

Without asking Barrett a single question, Whitehouse laid out what he said was a strategy by small group of influential conservatives to cement control of the federal judiciary. He displayed a series of charts drawing connections between organizations that promote the careers of favored judges and also write amicus briefs supporting conservative causes that appear before those same judges.

“This, more and more, looks like it’s not three schemes, but it’s one scheme. With the same funders selecting judges, funding campaigns for the judges, and then showing up in court in these orchestrated amicus flotillas to tell the judges what to do,” Whitehouse said.

Whitehouse also rebutted claims from Republicans on the Senate Judiciary Committee that Barrett’s nomination was unrelated to the Affordable Care Act case set to be heard on the Supreme Court later this year.

“Don’t act as if we’re making this stuff up,” Whitehouse said. “This is what President Trump said. This is what your party platform says. Reverse the Obamacare cases. Senator after senator, including many in this committee, filed briefs saying that the Affordable Care Act should be thrown out by courts. Why is it surprising for us to be concerned that you want this nominee to do what you want nominees to do?”

It’s an argument that Whitehouse has made before. Last month, for example, he called the situation “a problem of court capture.”

“This has been the product of a very orchestrated scheme to control who gets nominated, to provide funding, to provide political cover, to run certain cases before the Supreme Court,” he said then. “The big donors can get things done by judges that they can’t get even the Republican legislators to vote for.”