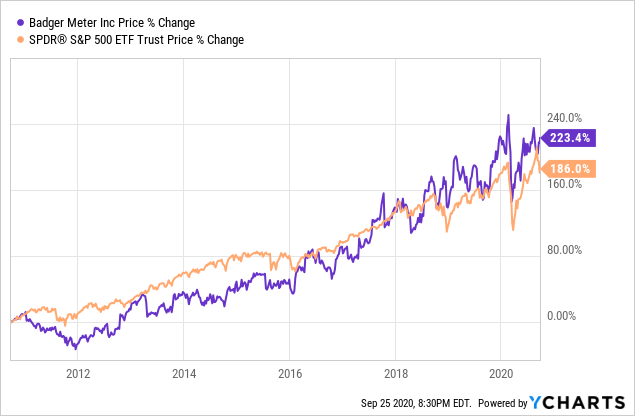 Though the recession crimped some end-markets of Badger Meter, Inc. (NYSE:BMI) and took a toll on its top line, in August, the company increased the quarterly DPS by 5.9%. So, it appears that even a harsh crisis cannot shatter the dividend growth story of BMI, a company that has been increasing the dividend consistently for 28 years. Unfortunately, due to its mid-cap size, it is not a dividend aristocrat, as to qualify for this upper-echelon status, it must be a constituent of the S&P 500.

I am fairly impressed with BMI’s dividend consistency, copious operating and free cash flows, and almost bulletproof balance sheet. But the essential concern that hinders me from giving the stock the bullish rating is its lofty valuation, which noticeably deviates from the five-year averages. Another issue is that the ~1.1% dividend yield does not match my investment preferences.

The top line: navigating the recession

Badger Meter is a flow measurement and control company. It has a vast portfolio of products and solutions that are crucial in a modern-day economy and will definitely not lose relevance in the future (certainly, considering their consistent improvement and modernization). Products and instruments it manufactures are used by municipalities and industrial companies to measure the flow of liquids, like crude oil or water, and steam, air/gas, etc. For example, to customers from the oil industry, it sells positive displacement flow meters, API oil/caustic and corrosive liquid meters, etc. Among other things, BMI also manufactures products and solutions for concrete finishing like vibrators. Those my dear readers who work in the construction industry or who have some experience in DIY construction likely know that without vibration, concrete will not be as robust as necessary, thus jeopardizing the structural integrity of, for example, a footing.

A conclusion that can be drawn here is that BMI’s portfolio is not totally recession-immune, as, for example, weak oil prices precipitated the capex reduction trend in the petroleum industry, which dented demand for certain products and thus took its toll on BMI’s revenues, while softness in construction also likely made an adverse impact. But the silver lining is that Badger Meter is focused on utility water meters and systems (78% of the portfolio; slide 7), while non-water flow instrumentation accounts for only 11%. Thus, though BMI was not entirely immune to the oil market carnage, it emerged relatively unscathed.

The previous decade was a productive period for the company, as its 10-year revenue Compound Annual Growth Rate stands at 5%, and the EBITDA CAGR is ~6.2%, which means it excelled not only regarding the top-line expansion but also optimized margins, thus shoring up profits and improving dividend sustainability. But the CAGR analysis has its limitations: it smooths the volatility between periods, so wrong conclusions can be made regarding the resilience of expansion. And here is the thing. A 10-year figure is largely influenced by the record revenue surge in 2012, 21.6%, which was impacted by the Racine Federated acquisition that catapulted annual revenues, which were also spurred by the increase in “sales of products for the municipal water market.”

But if we exclude the record 2012 from the analysis and take a look at three-year and five-year figures, the growth story looks a bit weaker, as both rates are in low-single digits. Again, EBITDA rose quicker than revenues, which point to the fact that BMI’s margins inched slightly higher.

Overshadowed by the crisis that has almost no precedents, 2020 appeared to be rarely challenging, and even the low-single-digit growth story stalled. For Wall Street, its 12% decline in the Q2 revenues precipitated by the detrimental effects of the pandemic was somewhat surprising, as pundits had expected the firm to be slightly less affected by the economic downturn. This could happen because the Street mistakenly factored in stronger performance of the flow instrumentation product lines and underestimated the effects of the lockdowns on water utilities. The analysts also set a too high bar for the Q2 net profit, which went down 16%. An important remark worth making is that earnings contraction happened despite a ~0.5% improvement in the gross margin. I reckon the improvement in the margin can be explained by the lower price of copper, which is, together with zinc, a component of brass, an alloy that is an essential raw material (page 4) of BMI.

The sales and earnings decline are disappointing, but let’s take a look at figures that matter most for a dividend investor. For example, both net operating and free cash flows for the first half of the year were substantially more robust than in 1H19, partly because of the positive change in working capital (thanks to the reduction in inventory and accounts receivable), and also because lower funds were allocated to capital expenditures. As a result, H1 FCF to Equity of $48.7 million covered the dividends paid almost 5x.

The 1H20 cash flow was remarkably strong, but how dividends paid compare to FCF over a longer period? For example, since 2010?

Created by the author using raw GAAP data from Seeking Alpha. The figures in $ million.

Using the GAAP data from Seeking Alpha, I calculated both organic and inorganic (with all investing activities factored in) FCF, and here are the conclusions:

It is a taxing task to find a mature public company (and an established dividend payer) that has an almost debt-free balance sheet. Fortunately, BMI is one of them with a Debt/Equity ratio of 1.3%.

When GDP goes down, hefty borrowings is one of the primary reasons that make companies slim down the payout, as interest and looming maturities are essential cash allocation priorities. Reduced or suspended DPS will result in a sell-off in the worst-case scenario, while missed interest payment means default. But in the case of Badger Meter that has an $85.2 million cash pile and only $4.5 million in debt, it is not a concern.

As BMI has a diminutive share of debt in the capital structure, I would like to ignore my favorite capital efficiency metric Cash Return on Total Capital, and opt for Cash Return on Equity. My calculations show that the LTM CROE stands at ~27.9%, a phenomenal result. Another metric that can effectively replace Return on Equity is FCF ROE. This metric is also startling and stands at 26%.

Final thoughts: Close to an all-time high, the stock is not a Buy

Even the coronavirus crisis cannot shatter Badger Meter’s dividend growth story (the Great Recession’s attempt also ended to no avail), so I expect it to continue increasing the DPS in the 2020s.

Sure, BMI has a plethora of indubitable advantages, from phenomenal efficiency to ample liquidity, but valuation is not one of them. A long-term-oriented investor should ignore the stock for now, as the forward adjusted P/E is ~27.4% above the five-year average. Other valuation metrics are also inflated. Thus, I am neutral.