Just in the time Beyond Meat (NASDAQ:BYND) has been a public company, year-over-year sales growth has dropped at an alarming rate from 287% in Q2 2019 to 68.5% in Q2 2020 according to the company’s own reported financials. This represents a decline of nearly 200% in the nominal rate of growth during a period of minimal competition. This is not a promising trajectory given that total TTM sales are only $400.8 million. 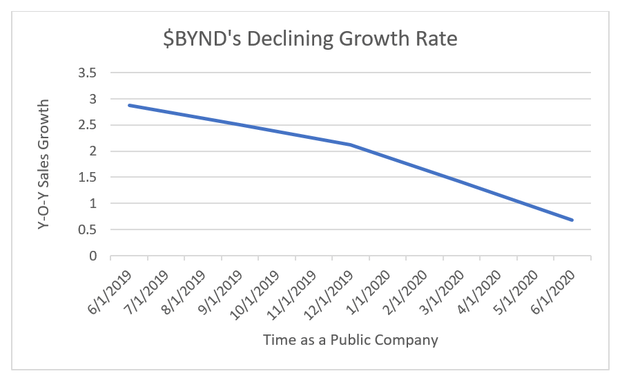 Even more concerning is the reality that y-o-y sales growth is expected to drop even more in the coming quarters. One would normally expect such a deceleration in growth for a more mature company with a higher level of nominal sales.

So, how is one to reconcile this plummeting growth rate with the widely held perception, perpetuated by talking heads such as Mad Money’s Jim Cramer that this company is growing by leaps and bounds? This is largely due to the extremely small revenue base during 2018 off of which 2019 year-over-year comparisons were made and heavily celebrated. This is a double-edged sword for the company, while 2019 growth rates look robust vs. the prior year, the 2020 y-o-y growth rates are considerably less impressive and comps will continue to get harder to beat as time goes on. A more informative metric would be sequential quarterly growth. 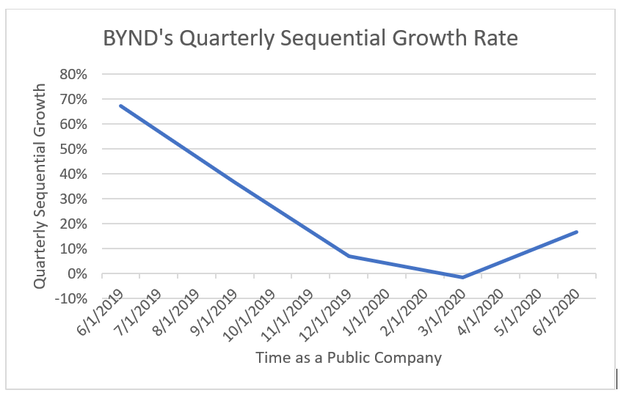 Unfortunately, for BYND, sequential quarterly growth rates have not been impressive for most of its time as a public company. In fact, Q1 2020 actually registered a decline in revenues from Q4 2019. It’s important to keep in mind that this lackluster sequential growth occurred during a period when Beyond Meat pretty much had the field to itself in the retail channel in terms of other meaningful competition. That changed in Q3 2020 when Impossible Burger announced it would be expanding its retail footprint by 50X.

Impossible Burger was sold in only 150 grocery stores in March. Impossible Foods’ award-winning, plant-based burger is now available in more than 5,000 grocery stores across the 48 contiguous states, including the nation’s largest grocery chain, Kroger, as well as Albertsons, Fred Meyer, Gelson’s, Safeway, Vons, Wegmans and many others.”

On 8/27/20, BYND announced it was launching an ecommerce site to sell directly to the public. This is in direct competition with their retail supermarket partners which will likely not lead to increased shelf space. It is possible the ecommerce site initiative is a way for Beyond to explain future declines in the retail sales channel that are, in fact, caused by the introduction of the Impossible Burger in many of the same retail outlets.

While Beyond prides itself in being non-GMO and Impossible Foods (IMPF) does not, most tasting comparisons show the Impossible Burger edging out Beyond. Assuming that Beyond splits the retail market with Impossible, the entire category would have to double for Beyond to simply retain its current level of sales with retailers.

On September 18, 2020, JPMorgan analyst Ken Goldman came out with a research note observing that Impossible Foods was indeed “taking share at grocery…”

The reality is the plant-based food sector could continue to grow at a rapid pace without Beyond materially benefitting therefrom given the competitive dynamics at play. It’s highly unusual for the market to be providing a trailing price-to-sales ratio of 24 times in the food sector. At some point, the investment community will re-rate shares of Beyond Meat to reflect the fact that its track records of sales growth do not measure up to its market valuation. Such a valuation re-rating to a more industry standard 1-2 times sales would result in BYND stock dropping by 80%.

Pivot from Food Service to Retail Necessary but Risky

Beyond’s reliance on the retail channel to meet its numbers is worrisome given Q3 headwinds including lower beef prices and the material increase in competition during Q3 from Impossible Foods and others.

While Q2 results were ‘saved’ by the retail channel, such retail sales were possibly unsustainably boosted by channel stuffing the club stores at a time when COVID-19-wary customers were stock piling consumer packaged goods and beef prices were at historic highs. Neither of these phenomena is sustainable.

Per the table below, by August, retail ground beef prices were already trading 11.8% lower than the June peak: 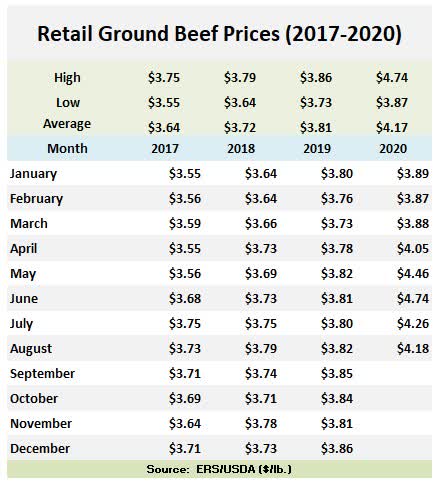 The prospect that BYND’s sales during Q2 2020 were boosted by unusual sales of value packs to club stores such as Costco, BJ’s, and Sam’s Club was hinted at by numerous equity analysts on the Q2 2020 earnings call. Relevant questions below:

Good afternoon. Thanks for taking my question. I had two related questions on the US retail segment. So, in the club channel, as you look at Costco, BJ’s, Sam’s Club, do those outlets plan to keep your product year round? And then also, as you look at the cookout classic, I think you debuted some of the discounters.

Is that more — it sounds like that’s more temporary. So, is that more just a Q2 benefit, or do you see that benefit in future quarters as well?

“… Your growth in the US, Ethan, it was a lot better than what scanner data might have suggested.

Are there any maybe shipment timing issues we should be aware of that either boosted or affected your shipments during the quarter? Just thinking about how we should model the third quarter a little bit.”

Using BYND’s own figures, the number of outlets globally carrying Beyond’s products increased from 58,000 to 112,000 between Q3 2019 and Q2 2020 for an increase of 93%. However, sales only increased from $91.9 million to $113.3 million during this period for an increase of just 23%. This implies that the amount of product sold per location has declined meaningfully during this time period.

The math is simple, yet it flies in the face of management’s claims that their sales velocity is increasing. The term ‘velocity’ is never defined by management and always mentioned flippantly by CEO Ethan Brown during earnings calls. How could velocity be increasing when the growth in the number of outlets far outpaces total sales growth?

Given the slowing sales growth, it’s no wonder Insiders have been selling shares hand over fist. In fact, they have sold over 1.185 million shares in just the past 6 months. Two of the most active inside sellers have been CFO Mark Nelson and Chief Growth Officer Charles Muth, the two insiders who would have the most direct view of future sales prospects and profitability, or lack thereof.

While not anything to panic about at the current time, BYND’s cash burn is something for prudent investors to keep an eye on. The chart below illustrates that BYND’s cash position is down over $90 million from Q3 2019 to Q2 2020. During this same period, long-term debt and capital lease obligations have nearly tripled from $21.8 million to over $61.67 million. If this trend continues, it is likely the company will need to raise capital via the sale of additional shares in a secondary offering. 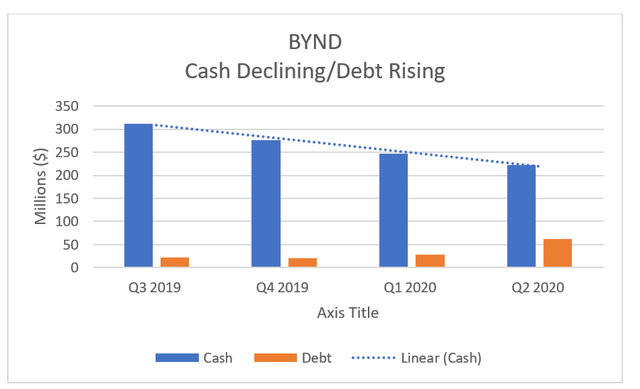 Historically, BYND has done a very good job of innovating with new products/flavor profiles/packaging propositions. Recently, however, the pace of innovation appears to be slowing, possibly due to work-at-home mandates related to COVID-19. It’s harder for teams to innovate when they are not able to collaborate in person in a professional environment with the needed equipment. Perhaps that’s why BYND’s greatest innovation so far in 2020 has been the introduction of meatballs, which are basically the same product as the Beyond Beef package introduced during 2019, just in a different shape and with some additional seasonings. Not a technological breakthrough by anyone’s imagination.

Beyond Meat has been in continuous litigation with its former co-packer Don Lee Farms since 2017. In its latest filing (August 11, 2020), BYND admits that pathogens including salmonella and listeria were present in the Mansfield, TX co-packing facility BYND had contracted with Don Lee Farms to produce their products.

-“Let Beyond Meat explain why they are saying our claim is frivolous when the Court already granted our application for a Right to Attach Order and issued a Writ of Attachment after finding that the Application established a probability of success on the merits for the breach of contract claim presented to it.”

-“Have Beyond Meat explain why they are being sued by multiple shareholders, including for breach of fiduciary duties and unjust enrichment and why company insiders have been selling stock. “

Given the numerous headwinds mentioned in this article, investors would be advised to steer clear of Beyond Meat at its current valuation. Slowing growth, increasing competition, cash burn, stifled pace of innovation, and legal risk could weigh on the stock in the months ahead. We believe a re-rating of the stock is likely that could result in an 80% decline in share price. Investors might even be better served taking a flyer on a company like Laird’s Super Foods ($LSF) which went public last week. While it’s trading at a similarly ambitious TTM price-to-sales ratio of 19+, at least one could argue it’s got more of a moat given there’s only one Laird Hamilton.

Disclosure: I am/we are short BYND. I wrote this article myself, and it expresses my own opinions. I am not receiving compensation for it (other than from Seeking Alpha). I have no business relationship with any company whose stock is mentioned in this article.