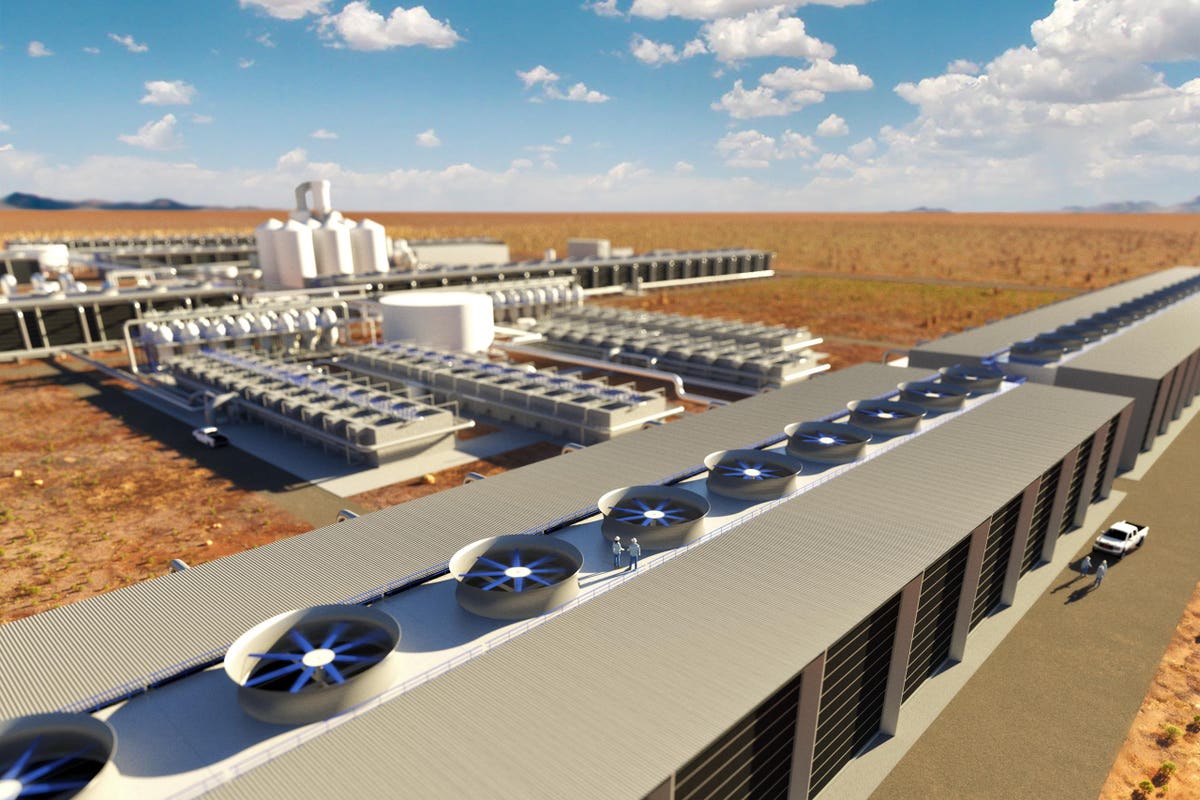 Carbon Sequestration-as-a-Service (CSaaS) can make “Carbon-free Shopping” as ubiquitous as “Free Shipping” is today, but to do so, a lot of infrastructure needs to get built. The football field-sized plants that pull CO2 out of the air for sequestration or reuse air don’t appear with the wave of a hand. Someone has to fund, plan, build, and operate them.

With all due respect to Mr. Software-is-eating-the-world, Marc Andreesen, a cool app can’t cool the planet. Software may be part of the solution, but software alone just doesn’t cut it – a new physical infrastructure must be developed.

The absolute necessity for a hard asset build-out is why the other two of Carbon Engineering’s three recent big press releases particularly caught my attention. These announced that CE had agreed to grant national licenses for its world-leading Direct Air Capture (DAC) technology to two development companies – one in the U.S. and one in the U.K.

Both licensees are backed by some deep-pocketed and savvy investors who understand three facts:

The US organization is a start-up named 1PointFive after the reference in the Paris Climate Agreement to “…pursue efforts to limit the [average global] temperature increase…to 1.5 degrees Celsius.”

1PointFive founder and CEO is the experienced entrepreneur and venture capitalist, Jim McDermott, who sits on Carbon Engineering’s board and was one of its early investors and supporters. His experience includes power utility investment banking and years in the renewable energy private equity and venture capital business. His companies include Fulcrum BioEnergy and other low-carbon hard asset investments.

1P5’s chairman is Richard Jackson, the General Manager and President of Occidental Petroleum’s Enhanced Oil Recovery (EOR) division and head of Oxy Low-Carbon Ventures, a subsidiary of Occidental that was one of the principal investees in Carbon Engineering’s 2019 fund-raising round. Jackson is a petroleum engineer by training, and he is intimately aware of the process involved in “tight” oil extraction using injection of CO2 – a process known as “CO2 flooding” or CO2-EOR.

McDermott and Jackson may not be the twenty-somethings you’d find heading up a Candy Crush economy start-up, but for a company that aims on building dozens of direct air capture plants across Texas’s Permian Basin over the next decade, you’ll be hard pressed to find better leaders.

1PointFive has a lot going for it in addition to the deep leadership bench and CE’s DAC technology; specifically, it has the exclusive rights to use Occidental’s CO2 storage capacity which is the most extensive of any oil company on the planet.

Occidental is a major user of CO2 in its EOR operations – injecting nearly 20 million megatons (Mt) of the gas every year. Oil produced through CO2 flooding is eligible for credit through California’s Low-Carbon Fuel Standard (LCFS) program because the injections offset some of the emissions related to the oil’s production and use. This means that OXY
gets paid twice – once for the oil produced and once for the carbon sequestered.

Most of the CO2 Occidental uses in its production comes from natural underground reservoirs, requiring the company to explore for, drill, and transport the CO2 before it can even start on the process of recovering oil.

The first 1P5 plant – originally announced in 2019 and now having over 25,000 man-hours of engineering completed – will pull down around 1 million MtCO2 per year. This means that it is in Occidental’s interest to have another 19 of 1P5 DAC plants as quickly as they can get built. In 1P5, Occidental sees a direct path to become the world’s first low-carbon upstream petroleum producer.

Experienced team, proven, scalable technology, and strong commercial demand from Day 1 – all for a project that is essential for civilization to continue to survive and thrive. It’s hard to think of a better long-term infrastructure investment than 1PointFive, in my opinion.

CE’s UK licensing partner is Pale Blue Dot Energy, a company which has the financial and technical support of several big oil and gas producers (Chrysaor, Shell and Total) in addition to funding and support from the EU, the UK, and the government of Scotland.

One possible location for the plant is a spot on the far northeastern tip of Scotland called St. Fergus Gas Terminal, one of the largest natural gas transfer and processing stations in the UK. Pale Blue Dot is the development partner for the Acorn Carbon Capture and Storage (CCS) project being planned and built at St. Fergus.

Acorn CCS was designed to capture smokestack emissions at St. Fergus, then use decommissioned gas pipelines and production platforms to sequester the captured CO2 below the cold floor of the North Sea. The source of the CO2 being captured is natural gas that is being burned to create hydrogen, an alternate fuel source I wrote about in my article about Bill Gross’s new company, Heliogen.

Pale Blue Dot may use the Carbon Engineering license to create a DAC facility that can share the pipeline infrastructure mentioned above to sequester the atmospheric CO2 alongside the CO2 from Acorn’s smokestack emissions.

Notice the similarities between 1P5 and Acorn. Both projects have the engineering and investment support of oil and gas producers and both have access to and an understanding of CO2 storage. We believe that the similarities offer an insight into the future of energy production. Oil companies will develop and expand their expertise in sequestration technologies – becoming, in effect, waste disposal and recycling companies while continuing to provide carbon-based energy sources.

Many greenies hate the oil companies and wish for nothing but divine retribution on them for the damage carbon emissions have done to the environment. Frankly, it’s hard to study the issue of climate change for too long without succumbing to at least a twinge of this sentiment.

However, it’s important to understand that whatever their past sins, oil companies do have phenomenal understanding of geological engineering and complex infrastructure projects. To this observer, carbon miners are an essential partner in what will be the largest challenge ever faced – the challenge to maintain our environmental conditions within bounds that allow for the continuation of our complex civilization.

Marc Andreesen said that software was eating the world. In fact, Carbon Engineering’s “software” – its direct air capture know-how – is saving the world. But to save the world, we need “hardware” companies – those expert in large-scale infrastructure projects – to build out the facilities to do the hard, day-to-day work of pulling down atmospheric CO2 levels.