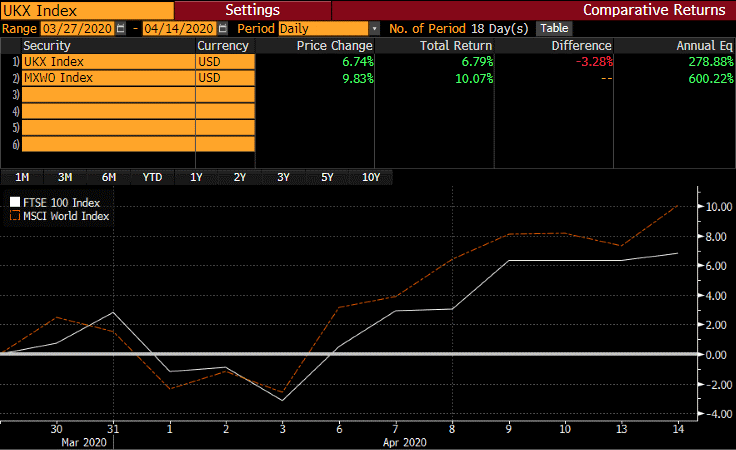 In response to the overnight news that President Trump and his wife have both tested positive for the coronavirus, this article looks at the performance of markets after two other world leaders previously contracted the virus. UK Prime Minister Boris Johnson and Brazilian President Jair Bolsonaro both contracted the illness earlier this year, and have made recoveries.

The announcement that Boris Johnson had contracted the novel coronavirus came on March 27th. From his public diagnosis, through the UK Easter Monday holiday after he was released from the hospital on April 12th, the FTSE 100 underperformed the MSCI World Index (URTH) by roughly 3.3%. This was a solid period for global equity markets, which were bouncing off the recent COVID-impacted market lows. To strip out currency effects, I have put each index in dollar terms. 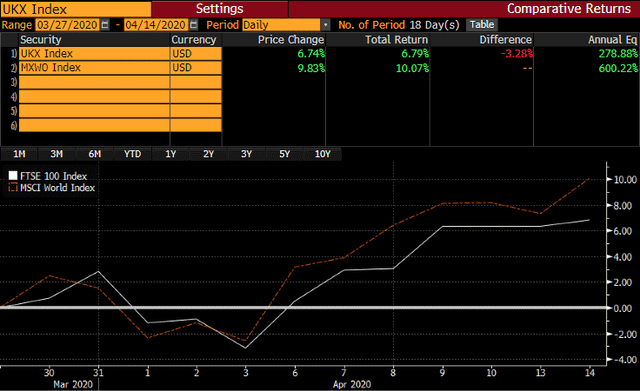 Over that time horizon, UK 10-year gilts decreased in yield from 0.37% to 0.34%, while ten-year Treasury yields increased 4bp, going from 0.72% to 0.76%. In a risk scare, we would expect to see government bonds rally in a flight-to-quality trade, which is what UK government bonds did over the course of the Johnson hospitalization.

Taking a longer lens on equity markets, the FTSE 100 has dramatically underperformed global equity markets since the announcement of the Johnson hospitalization. Since March 27th,the FTSE 100 has returned 12.8% versus 31.9% for the MSCI World Index (both in USD terms). Other factors are certainly in play, including the still uncertain Brexit terms, a weaker UK recovery, and relative gains from U.S. tech stocks currently dominating capitalization-weighted global indices.

The other major world leader that has previously tested positive for COVID-19 was Brazilian President Jair Bolsonaro. His public announcement of a positive COVID test came on July 7th. From that date through his announcement of a negative test result on July 25th, the Ibovespa actually outperformed global equity markets. 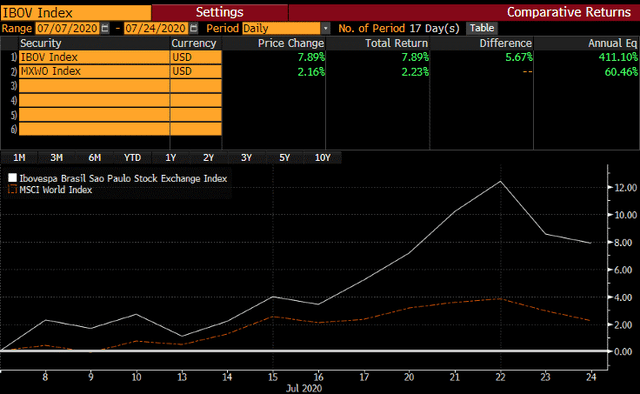 Brazilian assets (EWZ) outperformed over this period, but have had a dire full-year 2020. For the full year, the Ibovespa is down 41% in USD terms while the MSCI World Index has produced a positive 3% total return. The rally in Brazilian assets during Bolsonaro’s COVID-related absence from the public eye may have been driven by a view that his government was coming to an end. A more positive take would be that despite dire outlooks for the economy, the government’s fiscal position, and heightened risk premia for Brazilian assets that the country has avoided further negative tails related to the crisis.

Markets are quickly trying to price a new set of uncertainties after President Trump’s coronavirus diagnosis. Each of the three men – Trump, Johnson, and Bolsonaro – were among the most vocal global leaders in dismissing the early threat from the pandemic. It is not without irony that they are the three most prominent world leaders to contract the illness. Even the most vocal Trump detractors should wish the U.S. president well in this circumstance.

In the aftermath of Johnson’s and Bolsonaro’s positive test, equity markets in both countries actually rose despite both the UK and Brazil having experienced weak performance for full-year 2020. In the UK, the FTSE 100 rose, but underperformed global indices; in Brazil, the Ibovespa rose, and outperformed global markets. In the United States, we should expect a modest risk-off tone in equities today, a strengthening dollar, and lower yields and higher prices on longer duration Treasury securities. These moves could extend over the next week as news flow under the President’s health comes to light.

Some might suggest that the virus news is a non-event as Trump was meaningfully trailing in polls with just over a month to go until the election. It certainly will limit his time on the campaign trail, which could hurt his ability to close the gap with his rival. It could also save the American people from another quixotic debate with Biden. With Trump well behind in polls, perhaps a health scare could engender some level of public sympathy that could help him more than additional vitriol on the campaign trail. Whatever way you take the news, it adds another wrinkle to a contested election that markets will have to factor into their calculus.

Disclaimer: My articles may contain statements and projections that are forward-looking in nature, and therefore inherently subject to numerous risks, uncertainties, and assumptions. While my articles focus on generating long-term risk-adjusted returns, investment decisions necessarily involve the risk of loss of principal. Individual investor circumstances vary significantly, and information gleaned from my articles should be applied to your own unique investment situation, objectives, risk tolerance, and investment horizon.

Disclosure: I am/we are long SPY. I wrote this article myself, and it expresses my own opinions. I am not receiving compensation for it (other than from Seeking Alpha). I have no business relationship with any company whose stock is mentioned in this article.