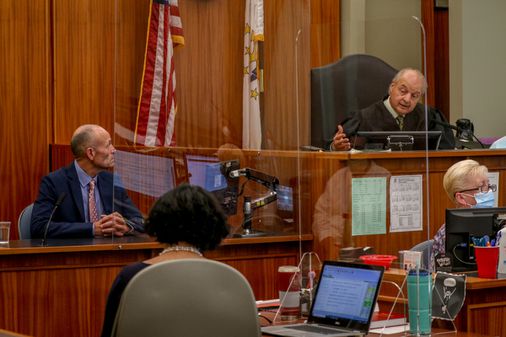 Defense lawyer Robert Clark Corrente sought to shift the focus to the Board of Elections investigation that prompted the case against Britt, saying key players had dodged questions, refused to answer subpoenas, and outright lied.

“It’s outrageous” Corrente said. “I am going to argue that this entire proceeding from the beginning to end has been highly irregular.”

And it served to tee up a dramatic final day of testimony on Thursday, when the defense is expected to call Mattiello to the witness stand in addition to his chief of staff, Leo Skenyon, and his former campaign aide and legal counsel Matthew Jerzyk.

Corrente has maintained that the Mattiello campaign is trying to make Britt “a fall guy.” Mattiello has denied knowing anything about the mailer until much later, casting Britt as an overzealous campaign worker trying to “ingratiate” himself.

The day’s testimony began with Assistant Attorney General John M. Moreira taking Thornton through the relevant sections of campaign finance law and documenting that reporting requirements had not been met for the controversial flier.

Prosecutors claim that Britt, who was working as a consultant for the Mattiello campaign, arranged for two associates – Victor Pichette and Teresa Graham – who each provided $1,000 to Lawton, who had $43 in her campaign account, so she could pay for a $2,150 mailer backing Mattiello.

During cross-examination, Thornton acknowledged the Board of Elections never fined or issued a warning to Britt, and he said Britt was never the subject of a board investigation, though he was part of the investigation into whether the Mattiello and Lawton campaigns illegally coordinated to fund the mailer.

Corrente zeroed in on the responses Thornton received when requesting documents in his investigation.

For example, Thornton said he had trouble reaching Pichette, and when he did reach him, Pichette claimed he did not know Britt – which turned out to be untrue.

When prosecutors objected, Corrente said, “If the state’s main witness is lying to the Board of Elections, I think that is important evidence in our defense.”

Corrente claimed Lawton also lied in telling Thornton she had none of the requested documents.

Thornton acknowledged receiving a response from Michael DiChiro Jr., a lawyer representing Mattiello who is now a state Traffic Tribunal magistrate, declaring that Mattiello “did not willfully and knowingly arrange, coordinate or direct Ms. Lawton to make an independent expenditure for her campaign mailer, nor did Mr. Britt.”

But based on his investigation, Thornton concluded that the production of the Lawton mailer “was coordinated with at least two members of Speaker Mattiello’s organization” – Britt and Jerzyk.

Thornton said that after Mattiello won re-election, his campaign amended an earlier report to say that Lawton had made a $2,150 “in-kind contribution” to him. Mattiello’s campaign then reimbursed Lawton’s campaign $1,150 to remain under a $1,000 contribution limit.

Corrente said Lawton also changed her story – at first saying she had not coordinated with the Mattiello campaign but later acknowledging she had.

In response to a question from the judge, Thornton said that when dealing with first-time candidates such as Lawton, he takes into consideration that they’re probably unfamiliar with campaign finance requirements. So, he said, he tried to outline the requirements based on whether the mailer represented an independent expenditure or not.

Corrente said that at one point, the Mattiello and Lawton campaigns had provided the Board of Elections with “two contradictory answers” within the space of 10 days.

And yet, Corrente said, Thornton never interviewed Mattiello or Skenyon. And, he said, the Board of Elections ended up issuing warnings to Mattiello and Lawton while referring Britt for prosecution.

Britt has waived his right to a jury trial, so Superior Court Judge Daniel A. Procaccini will render the verdict.

On Thursday morning, Procaccini plans to hear arguments from both sides on a defense motion to dismiss the most serious of the two charges that Britt faces – money laundering, a felony which carries a maximum penalty of 20 years in prison and fine of up to $500,000. The other charge is a misdemeanor count of making a prohibited campaign contribution, which carries a maximum penalty of a $1,000 fine.

On Wednesday, state prosecutors filed an objection, urging the judge to reject the motion to dismiss.

“The Rhode Island money laundering statute clearly and unambiguously prohibits an individual from conducting a financial transaction that he or she knows is designed to avoid a federal or state transaction reporting requirement,” prosecutors wrote. “The evidence in this case establishes that defendant Jeffrey Britt did just that — he orchestrated the financing of the Lawton endorsement mailer to disguise his own financial involvement and thereby avoided having his name disclosed as a contributor to the Lawton campaign in reports filed with the Board of Elections.”

Procaccini said he will hold off ruling on the motion to dismiss until the defense presents its witnesses. He said he will ask attorneys if they want to make closing arguments on Friday morning, and he will give them time to present written memos.

The public is not allowed in the courtroom because of the pandemic. But audio of the proceedings will be available two ways: livestreamed here, and on the phone at 866-819-7752 / participant 3127174#.