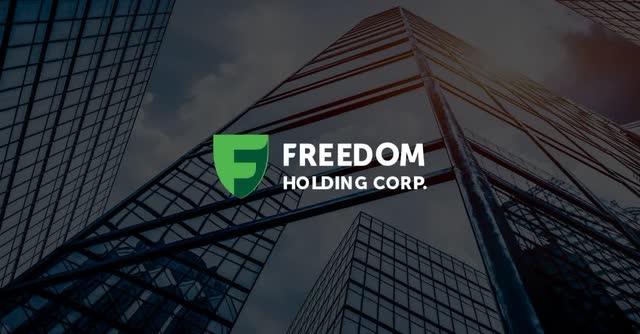 Freedom Holding Corp. (FRHC) shares are up 64% this year. However, growth prospects are not exhausted yet. I believe this is a rare example of a growing company at an attractive price. The company is aggressively growing its customer base and its financial performance is impressive. Opportunities for future growth are also provided by market conditions.

Freedom Holding Corp. is a growing investment company organized in the United States with the headquarter in Almaty, Kazakhstan. Freedom positions itself as an Investment Bank from Eastern Europe and Central Asia. The company provides various financial services including investment counseling, research, market making and underwriting services. However, this is more of a brokerage firm. More than 80 percent of Freedom’s revenue comes from brokerage commissions. The company gained wide popularity by providing its clients with the opportunity to invest in shares of American companies including new listings. FRHC has been listed on the NASDAQ since October 15, 2019, and it has been under spotlight ever since, which is surprising for Eastern European companies. The main shareholder of FRHC is Timur Turlov (I advise you to read the recent article by Bloomberg); he owns a 73% stake.

The main driver of growth is the market environment. Today, the brokerage market in the CIS countries is going through the same period as in developed markets several decades ago when discount brokers appeared. Today, the investment services market in Eastern Europe is experiencing a turning point: a generational change (the Soviet generation is distrustful of financial markets, while millennials are capitalists to the core) and record low key rates (five years ago, the interest rate of the Russian Central Bank was 17%, today the rate is 4.25%). These factors have led to an influx of individual investors into the stock market. Below you can see the dynamics of the number of individuals with a brokerage account on the Moscow Exchange. 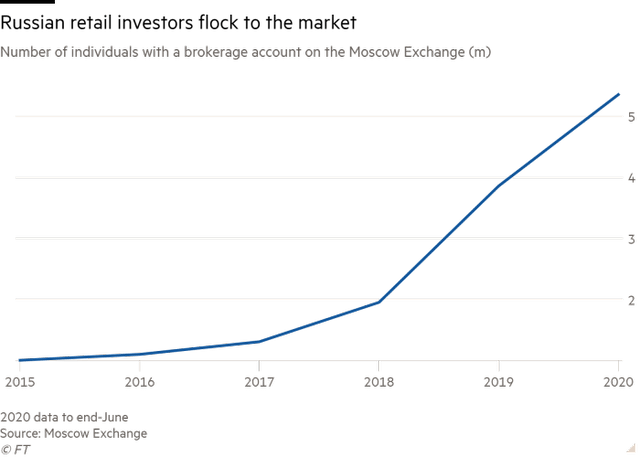 More than 5.3 million Russians have brokerage accounts, which is approximately 3.5% of the population. It is noteworthy that since the beginning of 2020, the number of individual investors in Russia has grown by 1.5 million. At the same time, more than 50% of the US population owns stock (according to Gallup).

The number of investors on the Kazakhstan Stock Exchange is also growing, although the growth rate is not so high. 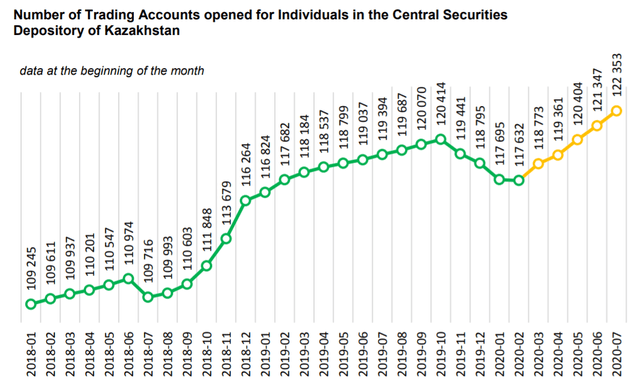 In other words, now is a favorable time for the development of investment companies in the Freedom’s target market. Considering that the market for investment services in this region is still very young and small in relative terms, and the growth rate is very high, I believe that the market environment is the main driver of growth for the company. However, market conditions need to be used properly. Freedom Holding Corp. is all right with that.

I am a loyal customer of the company. With the help of FRHC, I participate in the hottest IPOs in the US markets. Looking at the dynamics of the company’s financial and operating indicators, we can conclude that I am not alone. Freedom is rapidly growing its client base.

In terms of the BCG matrix, we have a star company.

Freedom’s fee and commission income has increased 51-fold since 2016. Company’s revenue surged 64% to $122 million according to the annual report released in March. Despite the phase of active growth, Freedom has positive dynamics of net income. Net income more than tripled to $22 million in the year. In the last quarter, the company also saved face – it increased its revenue by 103% YoY.

At the same time, the company is not afraid of cyclicality, since it earns mainly on commissions. The only real risk is the ability of clients to save and invest (the population of Eastern Europe and Central Asia does not have a high purchasing power). However, the realization of such a risk will manifest itself in a slowdown in the growth rate, which we have not yet observed.

I have been increasing my position in FRHC for six months. Freedom is a growing company in a growing market. The investment services market in Eastern Europe shows a high growth rate. For investors, this is an excellent opportunity to make money on an understandable business model that has been successfully implemented in developed countries. The company’s financial performance is also impressive. This is one of those rare cases when a “star company” trades at an attractive price (PEG = 0.41). A significant plus is the prevalence of fee and commission income in the revenue structure, which protects the FRHC from the influence of cyclicality. Despite the fact that the share price is up 64% since the beginning of the year, my recommendation is to buy.

Disclosure: I am/we are long FRHC. Business relationship disclosure: I have a brokerage account with Freedom Holding Corp.