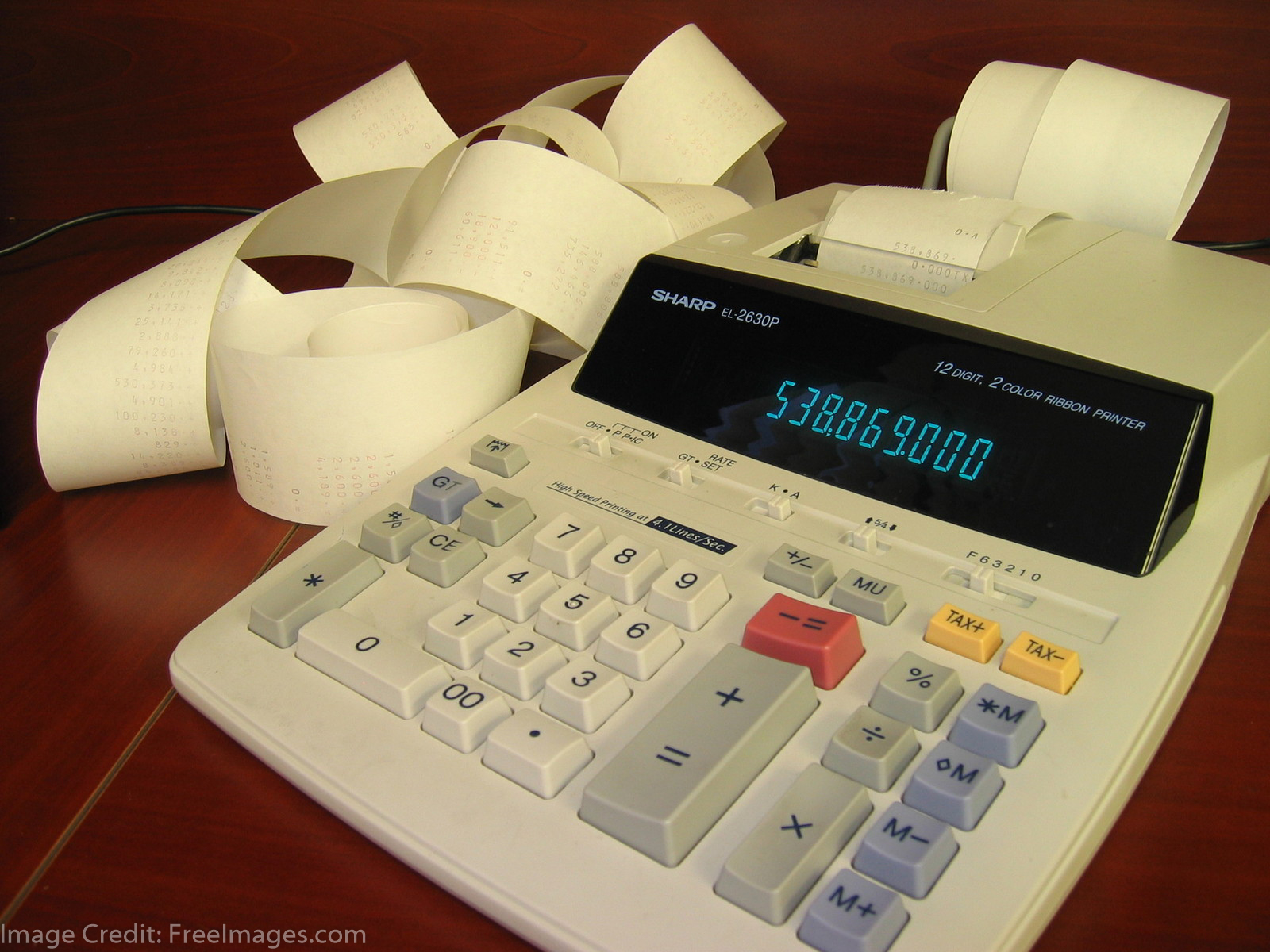 About 5 years ago, GBCI’s management team decided to clean out most problem assets (which took about two years to complete) and instituted a more disciplined credit culture which limited concentrations in oversupplied or higher credit risk areas.

Today, the loan book is very granular and GBCI’s markets may actually benefit from people fleeing cities for more space and a cheaper cost of living as remote work becomes more normal. GBCI has a robust loan loss reserve and very high capital levels, allowing them flexibility to weather any challenges that may arise.

With respect to GBCI relative to community bank peers, GBCI’s earnings should prove more stable due to greater net interest margin (NIM) defense, more consistent loan growth, and lower credit losses. Over its storied history, GBCI has been a preferred acquirer with limited competition from other banks across its Mountain West footprint.

On a longer-term investment horizon, I am fairly neutral on the name. GBCI has historically had a well managed expense base, but revenue headwinds are looming and likely to put downward pressure on profitability. While the current valuation is not overly expensive, I would not be surprised to see the shares stay steady near current levels before working higher in lockstep with peer banks.

While GBCI has historically held pricing power advantages through the Rocky Mountain States, due to limited competition, overall loan growth has usually lagged national peers. Following historical trends, after backing out the $1.4 billion PPP loans, the entire lending portfolio of $11.5 billion decreased $61.6 million from the end of the first quarter to the end of the second. Some of the notable loan balance changes came from “other commercial loans” which decreased $119 million, or 5%, and “commercial real estate” which increased $119 million, or 2%.

The reported net interest margin (NIM) fell 24 basis points to 4.12% in the second quarter. Core NIM, which excludes accretion, non-accrual interest income reversals, and revenue that will eventually be generated from the PPP loans, was down a modest 9 basis points in the quarter to 4.21%.

After further analysis, I would consider the recent NIM compression to be driven by a couple major items – these were decreased loans yields, which were only partially offset by the increase in yields on debt securities and the decrease in the overall funding base.

From a fee income perspective, the PPP loan program generated $53.6 million of SBA processing fees. A tricky nuance to these loans is the ability to defer revenue and costs associate with them. While most of the remaining revenue and cost deferrals will be incurred over the life of the loan, if the loan is forgiven, the remaining revenue and costs are incurred simultaneously. Net deferred revenue, minus fees, on the remaining PPP loans at quarter end was $40.6 million, which will be recognized into interest income when the loans are forgiven. When they are forgiven, the NIM will pop higher too as you see from the chart below. 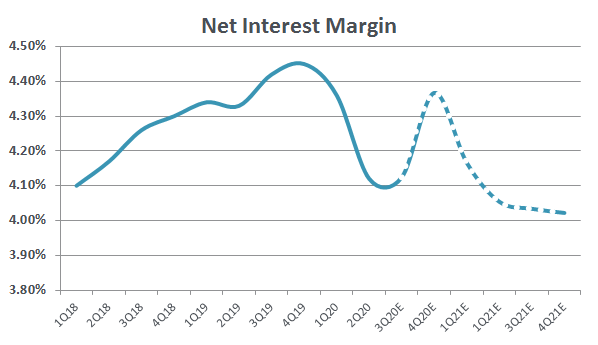 While the SBA has already opened their window to allow for PPP loan forgiveness, I am modeling a majority of PPP loans are forgiven in the fourth quarter. While that could eventually be delayed, it really doesn’t make much of a difference in terms of the NIM trajectory.

While I believe the deposit base is solid, its already low cost basis can’t move much lower, limiting the effects of compressing loan yields. Driven by loan yields repricing lower and future securities rolling over into smaller coupons, I believe the NIM is likely to work itself lower until the end of 2021.

The second quarter loan loss provision expense was $13.6 million. This marked a pretty sizable decrease (of $9.2 million) relative to the first quarter. After backing out PPP loans, the allowance for credit loss was 1.62% of the entire loan portfolio. Recall, this was just 1.49% in the first quarter, indicating that management has become a little more cautious on the lending environment.

I think management is making the right move, considering (after backing out PPP loans) GBCI has $631 million, or 6%, of its loan portfolio with direct exposure to industries for which it has identified as higher risk. This breakdown consists of hotel exposure (4.2% of loans), restaurant loans (1.5%), travel and tourism loans (0.2%), gaming loans (0.2%), and a few oil/gas lending relationships (0.2%). 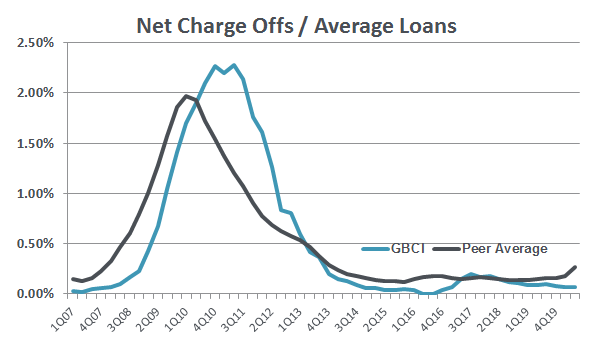 In the quarter, nonperforming assets were $46.0 million, up more than $6 million from the first quarter. However, early stage delinquencies (which are accruing loans 30-89 days past due) is probably the most important credit line item to watch. It was $25.2 million at the end of the second quarter, which is actually down $16.2 million from first quarter levels. To me this indicates that while some loans might “look bad”, they are actually getting better.

In my mind there are two concerns that the market might have with GCBI. Those concerns would be an elevated credit loss experience (similar to 2008-2010) and revenue headwinds that compress profitability. While I personally think that GBCI is likely to have fairly muted net charge offs relative to bank peer (i.e. credit losses will be better than average), I do think that future revenue compression will limit overall profitability – and thus valuation expansion.

As I touched on in the credit review, early stage delinquencies are doing just fine. I honestly believe that when GBCI altered its loan portfolio and instituted a more comprehensive credit review to all loans, management wasn’t just paying lip service to what the market wanted to hear. To me it appears as though management actually did change the bank’s lending behaviors.

That said, with an already stretched price to tangible book value per share valuation, it’s difficult to see how compressing profitability will provide shares fodder to outperform bank peers.