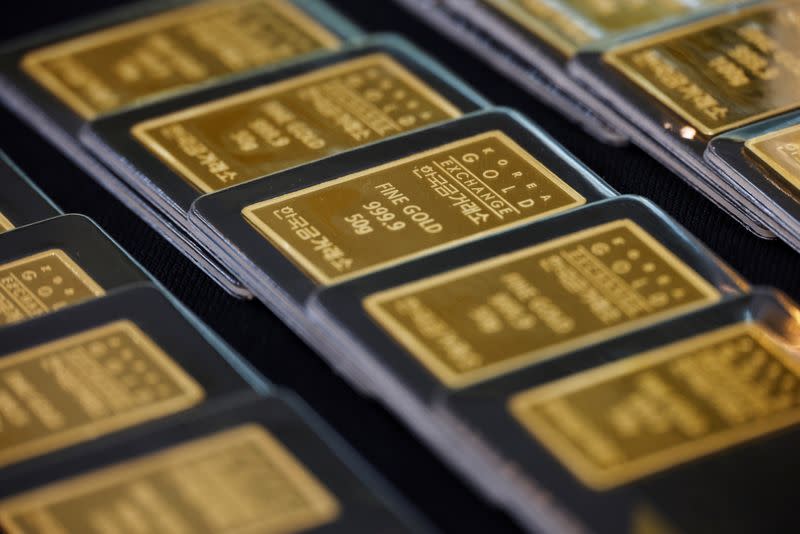 (Reuters) – Gold was headed on Friday for its best weekly gain in nearly two months, despite prices slipping from a more than one-week high as the dollar strengthened amid doubts regarding the U.S. stimulus package.

However, bullion has gained 1.8% this week, its biggest weekly percentage rise since the week ended Aug. 7.

“There was increased optimism about the stimulus talks, but late in the day that optimism fell away and as a result the dollar rallied a bit and we are seeing a retreat in gold,” said Edward Meir, an analyst at ED&F Man Capital Markets.

The dollar index rose 0.2% against its rivals, making gold more expensive for holders of other currencies.

The U.S. House of Representatives approved a $2.2 trillion Democratic plan to provide more economic relief from the COVID-19 pandemic, as a bipartisan deal continued to elude House Speaker Nancy Pelosi and the White House.

Gold tends to benefit from widespread stimulus measures as it is widely viewed as a hedge against inflation.

Data on Thursday showed the number of Americans filing new claims for jobless benefits remained at recession levels, while personal income dropped in August, underscoring the need for another government rescue package.

Investors focus now shifts to U.S. non-payroll figures due out at 1230 GMT for the latest indication of how the coronavirus-hit economy is faring.

(Reporting by Brijesh Patel in Bengaluru; Editing by Rashmi Aich)