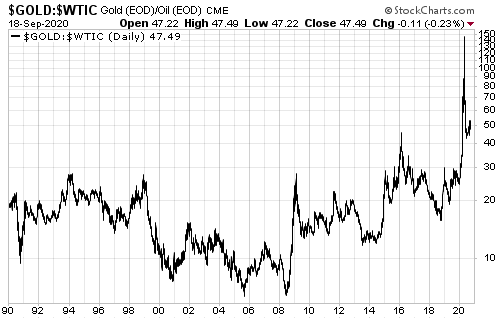 For two reasons, the high probability that the gold/oil ratio peaked on a long-term basis 5-6 months ago is not bearish for gold mining stocks.

The first reason is that the plunge in the gold/oil ratio from its April 2020 peak ended with the ratio at a multi-decade high. In other words, by historical standards, the gold price is still very high relative to the cost of energy, meaning that gold mining profit margins remain elevated. That’s why we expect the gold mining indices/ETFs to trade at much higher levels within the next 12 months.

The second reason is that when the gold/oil ratio retains about half of its gain from a major low (in this case in 2018) to a major high, which it has done to date, the time from a major gold/oil ratio peak to a major gold mining peak tends to be 1.5-2.5 years. This implies that the cyclical advance in the gold mining sector that began in 2018 won’t end before the second half of 2021, although be aware that a sustained move below 40 in the gold/oil ratio would warn that a multi-year peak was either in place or close.