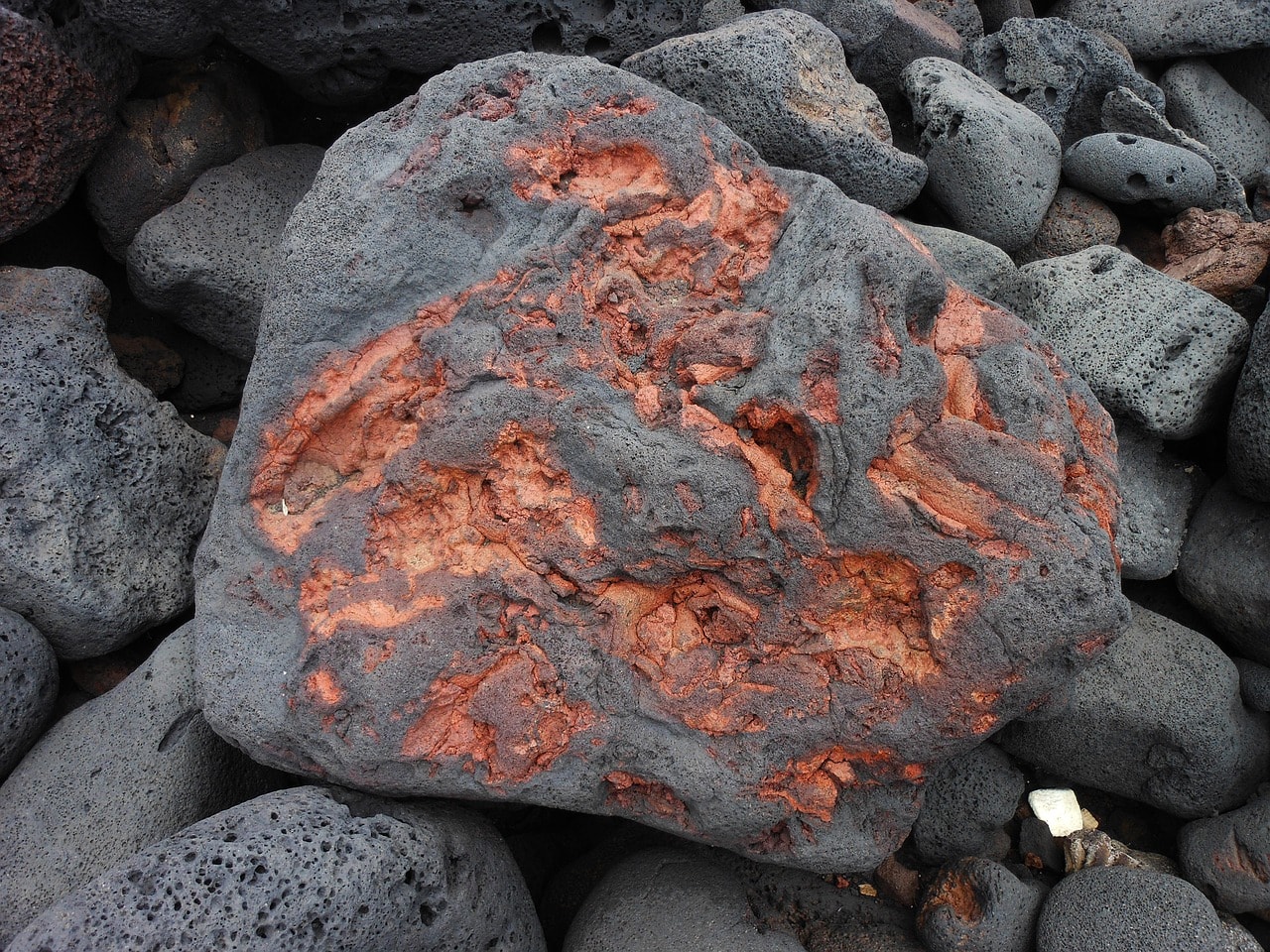 In this series of articles, I would like to focus on mineral exploration companies that have very high upside potential, but for some reason, they are flying deep under the radars of investors. It is important to note that although the featured companies have very high upside potential, they are also very risky, as their projects are in early development stages and there are many things that can go wrong. Therefore, potential investors should be very cautious and invest only a small portion of their portfolios. The first company in this series of articles was HighGold Mining (OTCQX:HGGOF) (the article can be found here). The second one is Kodiak Copper (OTC:KDKCF).

Just Like HighGold Mining, Kodiak Copper also released some blockbuster drill results lately, reporting exceptional intersection of 1.16% of copper equivalent over 282 meters, made at its flagship MPD copper-gold project. The company is led by an experienced team including some of the key people standing also behind Great Bear Resources (OTCQX:GTBDF). Great Bear Resources is a company whose share price grew from $0.4 in September 2018 to its current value of more than $11, driven by great exploration success at the Dixie gold project. Great Bear CEO Chris Taylor serves also as Kodiak Copper’s chairman. Kodiak CEO Claudia Tornqvist is a former general manager at Rio Tinto (NYSE:RIO), focused on the diamond and copper operations. What may prove very important is that she also worked for Sandstorm Gold (SAND). The experiences and connections with the people in the streaming business may be very valuable in the future when (and if) Kodiak gets to the point when the mine construction financing is needed.

Another of Kodiak’s advantage is its tight share structure. There are only 37.9 million shares outstanding and 49 million shares fully diluted. Even after the recently announced C$12.5 million ($9.33 million) equity financing is completed, the share count will increase only by less than 5 million shares. Also, the shareholder structure looks good, the insiders own 14% of shares, “high net worth” investors hold 36% of shares, and the new strategic investor, Teck Resources (TECK), holds 9.9% of shares.

The MPD project is located in southern British Columbia, in the middle of a mining region with multiple operating mines, such as New Gold’s (NGD) New Afton gold-silver-copper mine, Teck’s Highland Valley copper-molybdenum mine, or Copper Mountain Mining’s (OTCPK:CPPMF) Copper Mountain copper-gold mine. Therefore, the infrastructure in the area is very good, the property is road-accessible, and also the permitting process should be relatively smooth.

The MPD project consists of three properties (Man, Prime, Dillard – therefore MPD), covering a total area of 78.5 km². What is interesting is that 129 drill holes were completed at MPD between 1966 and 2014 by previous operators, including Newmont Corporation (NEM) and Rio Tinto. However, the historical drilling was focused only on shallow depths up to 200 meters below the surface. The results were not too impressive, and so, in November 2018, MPD got acquired by Dunnedin Ventures (as of April 1, 2020, renamed to Kodiak Copper). Kodiak believed that there is potential for higher copper and gold grades at greater depths. And this theory turned out to be right.

In November 2019, Kodiak initiated its first drill campaign at MPD and discovered the Gate zone, where 763.65 meters long interval grading 0.28% of gold equivalent was drilled. This long interception included also an interval of 102.07 meters grading 0.68% of copper equivalent. But the best hole was drilled only during the current campaign, when on September 3, Kodiak reported an intersection of 282 meters grading 1.16% of copper equivalent (0.7% copper and 0.49 g/t gold), including 45.7 meters of 2.75% of copper equivalent (1.41% copper and 1.46 g/t gold). However, it is important to note that assay results for only one portion of the drill hole (MPD-20-004) have been released yet (picture below). Moreover, results from a nearby hole MPD-20-005 are pending. 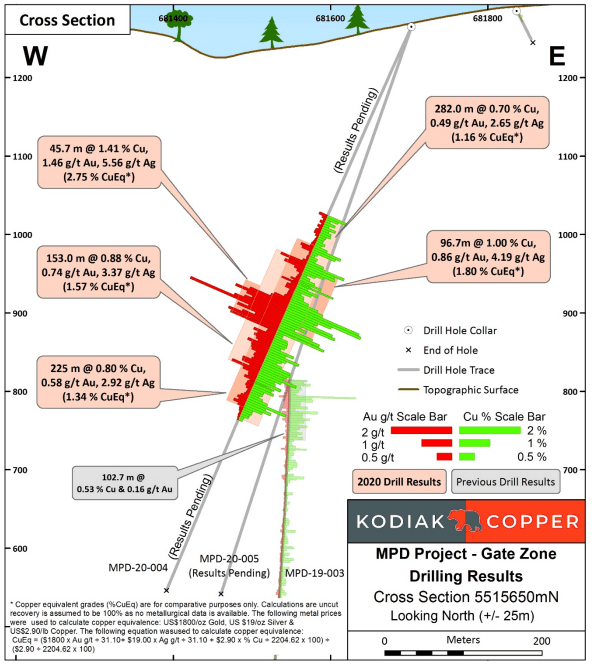 There is potential for more similar drill holes in the Gate zone area, under the 1,000 x 300 meters copper in soil anomaly. There is a similar target also in the Dillard zone area, and several other targets at Dillard East and Man (map below). 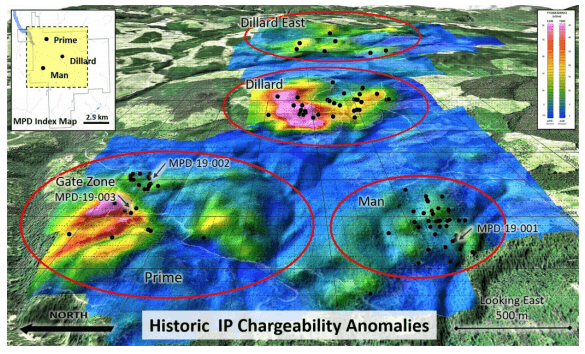 The recent discovery of the high-grade zone seems to be a game-changer. According to Kodiak chairman Chris Taylor:

“As compelling as our 2019 discovery of the Gate Zone was, it now appears we had only grazed the margins of a much stronger copper-gold zone which we have now successfully targeted. Our new results include discovery of a central high-grade copper-gold zone within the wider copper-gold mineralized envelope of the Gate Zone. These drill results are among the strongest that have been reported from this well-established copper mining district in southern British Columbia. Drilling is ongoing and we will be releasing additional results throughout the coming months.”

“We could not have wished for better drill results from our project. Especially remarkable are the new high gold values, which we would have viewed as a successful stand-alone gold discovery in the absence of any copper. So these results are a real game changer. And this is only the start. There are lots more drill results to come.”

The porphyry copper-gold deposits are usually large, but low-grade. According to a USGS study, the copper-gold porphyry deposits have copper grades only around 0.45% and gold grades around 0.38 g/t gold on average. The recent drill results show that the high-grade area of the MPD deposit has copper and gold grades well above the average. The question is how big this high-grade area is. Some more light on this question should be shed by the upcoming drill results.

Besides MPD, Kodiak owns also the Mohave and Kahuna projects. The Mohave copper-molybdenum-silver porphyry project is located in Arizona. The property covers an area of 10.4 km2, it is road-accessible, and according to Kodiak, the geological structures are similar to the nearby Freeport-McMoRan’s (FCX) Bagdad mine. An IP survey identified a 2.5×2.5 km geophysical anomaly. Historical drill results from 2011 (map below) show numerous intervals of copper-molybdenum-silver mineralization; however, the grades are not too impressive. 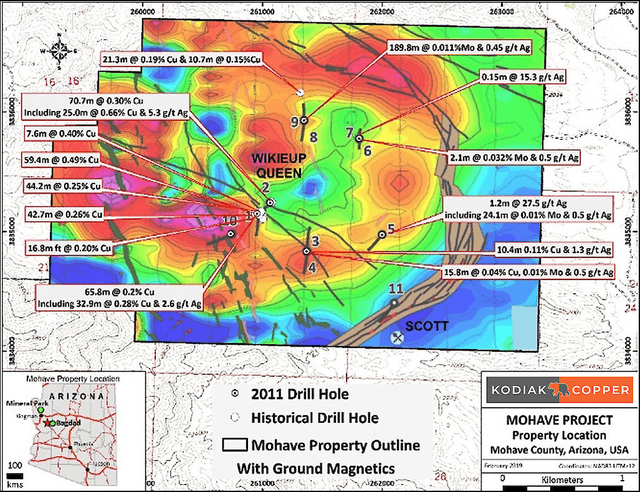 The Kahuna diamond project is located in Canadian Nunavut. There are two known kimberlite dykes with inferred resources of 4 million carats, at an average grade of 1 carat per tonne. Kodiak’s properties cover an area of more than 1,700 km2 and contain numerous exploration targets. However, given the current state of the diamonds market, Kodiak seems to be in no hurry to pour a more meaningful amount of money into the project anytime soon. 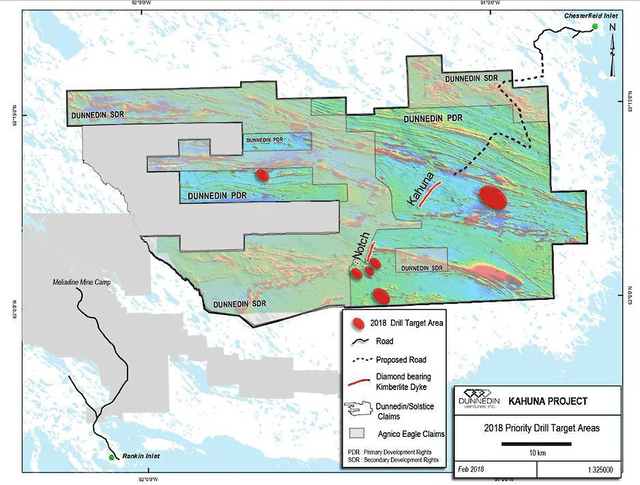 The upside potential and risks

However, as Kodiak’s projects are in early exploration stages, there is a risk that the recent drill results were only some kind of an anomaly and further drilling will not provide results good enough to outline an economically viable deposit. But this risk is only negligible in my opinion. Also, the permitting risk should be relatively small, given the fact that the MPD project is located in a mining-friendly area and it is surrounded by operating (and also by already exploited) mines.

A much bigger problem is related to financing the exploration activities, let alone the potential future mine construction. Drilling is expensive and many kilometers need to be drilled in order to outline a sizeable deposit and to convert resources to reserves. As of the end of Q2, Kodiak held slightly less than C$2 million ($1.5 million) in cash. The recently announced financing that should be completed in early October should bring further C$12.5 million ($9.4 million). Kodiak will need to raise more money sometime next year. The main question is at what share price, because the higher the share price, the lower the share dilution. The current financing has great timing, as the great drill results reported in early September helped to elevate the share price by more than 300%.

Another potential risk is that if MPD turns out to be a real success, Kodiak may get acquired too soon and too cheaply. The most probable suitor seems to be Teck right now. Teck not only operates the Highland Valley copper mine some 80 km to the north-west of MPD, it has also acquired a 9.9% stake in Kodiak recently.

After the steep growth, Kodiak’s shares got extremely overbought, with RSI surpassing the level of 95. Over recent days, an inevitable correction came and the share price declined from $2.5 to $1.5. Right now, it stands at $2.15, but a further decline cannot be excluded if the current stock, gold, and copper market weakness continues. 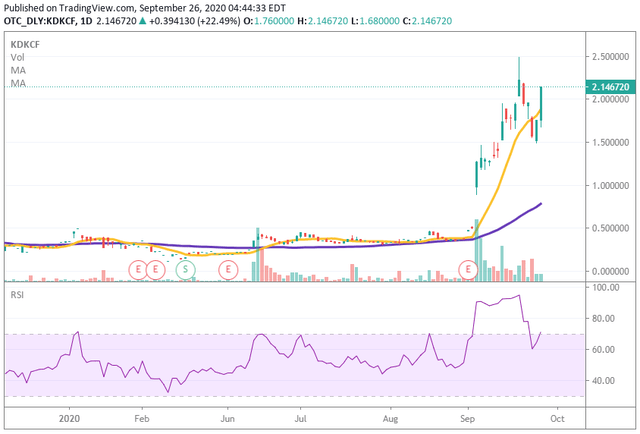 From a longer-term standpoint, the drill results from MPD (and maybe also from Kahuna) should be the main force behind Kodiak’s share price development. Moreover, the long-term copper and gold market fundamentals look very good. Investors may use the possible near-term share price weakness to initiate a position in this very promising company.

Disclosure: I/we have no positions in any stocks mentioned, but may initiate a long position in KDKCF over the next 72 hours. I wrote this article myself, and it expresses my own opinions. I am not receiving compensation for it (other than from Seeking Alpha). I have no business relationship with any company whose stock is mentioned in this article.