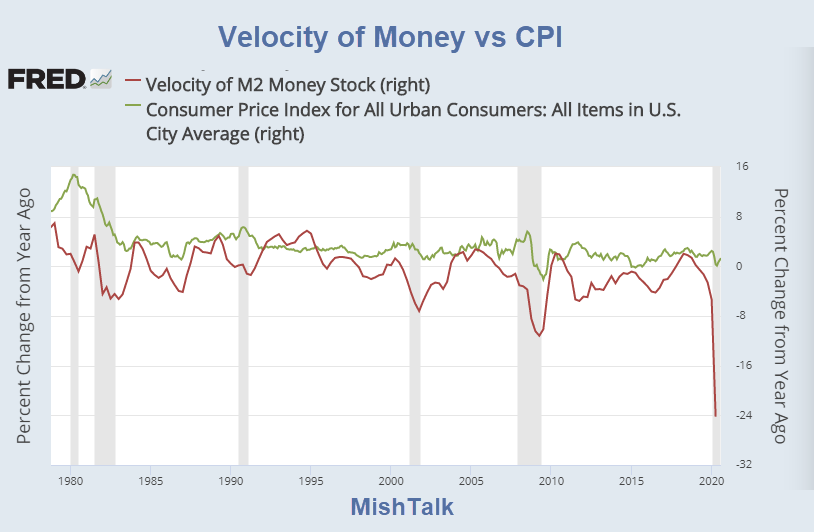 The St. Louis Fed Defines Velocity as the ratio of GDP to Money Supply.

There are several components of the money supply,: M1, M2, and MZM (M3 is no longer tracked by the Federal Reserve); M1 is the money supply of currency in circulation (notes and coins, traveler’s checks [non-bank issuers], demand deposits, and checkable deposits). A decreasing velocity of M1 might indicate fewer short- term consumption transactions are taking place. We can think of shorter- term transactions as consumption we might make on an everyday basis.

The broader M2 component includes M1 in addition to saving deposits, certificates of deposit (less than $100,000), and money market deposits for individuals. Comparing the velocities of M1 and M2 provides some insight into how quickly the economy is spending and how quickly it is saving.

MZM (money with zero maturity) is the broadest component and consists of the supply of financial assets redeemable at par on demand: notes and coins in circulation, traveler’s checks (non-bank issuers), demand deposits, other checkable deposits, savings deposits, and all money market funds. The velocity of MZM helps determine how often financial assets are switching hands within the economy.

The Fed is on shaky ground. M1 consists of demand deposits (checking accounts). Demand deposits are supposedly available on demand but money most think of as being in their account is not there at all.

Regulations allow banks to move money in checking accounts to other accounts for overnight lending in a process called Sweeps.

The Fed used to publish Sweeps Data but stopped doing so on January 17, 2014.

Since then, M1 is artificially low and M2 artificially high. I reconstructed M1 and M2 for a while, but money is now so distorted by Fed actions it’s not worth the bother except to note that neither M1 nor M2 are what they claim to be.

M2 Velocity is what most economists mean when the word velocity is used so lets start there.

It’s important to note that velocity has no independent life of its own.

GDP can be thought of as Prices * Transactions or (P * T).

This leads us to

I have discussed all this before, but the topic comes up again and again.

That is true, but was velocity was ever relevant?

Not Much of a Relationship

A Fred post on M2 Velocity and Inflation accurately concludes “there is not much of a relationship.“

A Fred scatter plot came to the same conclusion.

The Fred chart is similar to mine. I used year-over-year percentage change comparisons to put everything on the same scale.

Even in the 1920s, on a gold standard, there are periods when velocity and the CPI went in opposite directions.

Part of the problem is how to measure inflation.

Is inflation best measured by consumer prices (CPI), producer prices (PPI), the Fed’s preferred measure of Personal Consumption Expenditures (PCE) or something else?

None of those measures directly contain housing prices (now), but they used to.

The Definition of Inflation has changed dramatically over time.

Inflation is an increase in money supply and credit, with credit marked to market.

I use that definition because that is how the economy works. Banks stop lending when they are capital impaired or they perceive there are no good credit risks.

Another credit crunch (deflation) is on deck when asset prices fall. Meanwhile, that is why the Fed stepped up to the plate with a myriad of lending facilities.

The Fed Now Owns Over $2 Trillion in Mortgages, What Else?

For discussion of illegal Fed tactics, please see The Fed Now Owns Over $2 Trillion in Mortgages, What Else?

Circling Back to Velocity

We can surmise velocity is falling because money supply is soaring and prices didn’t.  But velocity did not cause that. It is a result, not a cause.

Even if velocity picks up, prices may not.

Velocity is a useless, inconsistent measure of something that has morphed over time yet never had an independent existence of its own.

Attempting to predict prices from velocity or velocity from prices is a  fool’s mission.