Usually, the monthly PCE/Inflation/Income data and the Jobs numbers come out a week apart, with the former on the last Friday of the month and the later on the first Friday of the next month. But, this month, we are getting both back-to-back, so there is going to be a lot to look at before the weekend.

The changes in household balance sheets have been extraordinary. Looking at it cumulatively since March versus the February TTM average: 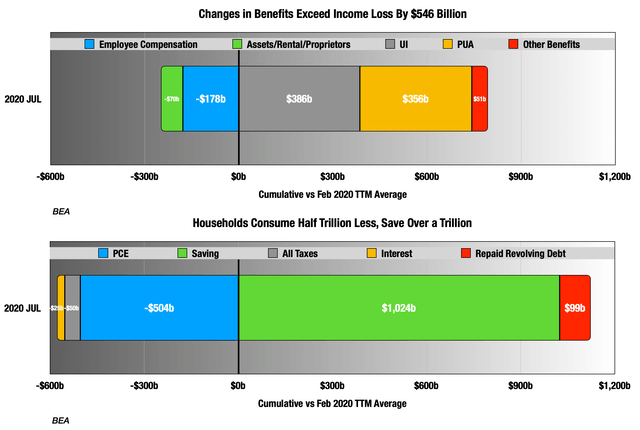 Add that trillion dollars to:

So, we have 4 cash bubbles, but the most important is the household bubble, because the others will follow what happens there. There are many indications of a “K-shaped” recovery, with high income households doing fine, and low income household struggling. If this is just savings in high income/net worth households, there is much trouble coming.

So, the very first thing I will be looking at is the savings rate, and whether any of that bubble has shifted to consumption.

The underlying story here is that there are many services: transportation, recreation, food, accommodations, and other high density services that are dragging everything down. The goods economy is doing very well, as people substitute household goods for services not available. The rest of services were only down by 2.3% versus February levels. This is still bad, but the high density services are down 24%. 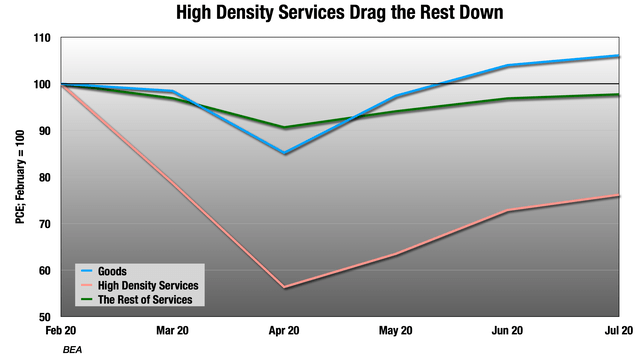 High density services were 23% of consumption in 2019, but only 18% in July. There is an accumulated revenue deficit of $407 billion in these businesses, and many will not survive this.

The blue “Rest of Services” line is dominated by housing and healthcare, the two largest categories, which are right now cancelling each other out, with healthcare doing poorly, and housing acting like nothing is happening.

So, what we are going to be looking for:

On Friday, we get September jobs, and this is a crucial one, because we are going to begin to find out what is happening with education workers, home of 3.1 million unemployed in the unadjusted numbers. The point of seasonal adjustments is to say, “yes, there are many education workers unemployed over the summer, but they will be back to work in September.” This year, we don’t know that.

Along with those high density services, these are the trouble spots in employment through August: 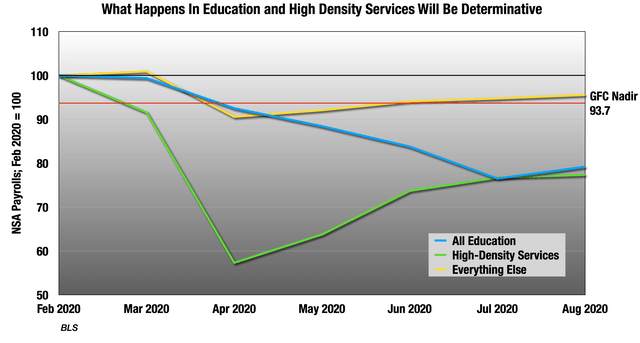 So, on the employer survey, the first thing I will be looking at is private education services and public education.

Since the pandemic started, the data quality has been exceptionally poor, and this has nowhere been more evident than in the BLS current population survey, a.k.a., the household survey.

The survey is conducted during the week ending Saturday that contains the 12th of the month. For September, that is September 6-12. They try and reach each household in the survey for 8 months in a row, and usually, they get responses from over 80% of households every month. The first and fifth are in-person interviews, the rest phone. That first one is crucial for getting the onboarding process started.

Now, they are not doing in-person interviews, and as a result, they are having trouble getting households onboarded. Here are the participation rates for August broken down by month that household is in the survey, compared with the February TTM average: 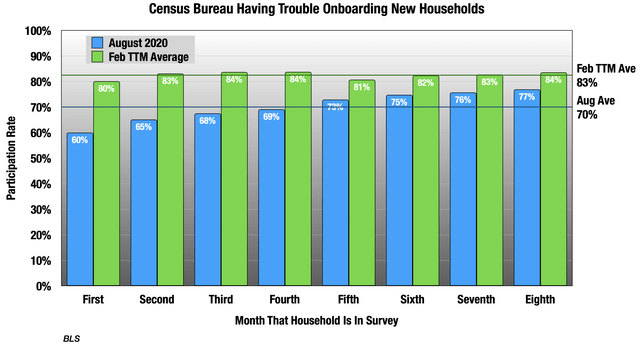 They’re having particular trouble with those first few months, going back to households that began the survey in May. The first month response rates were even lower then. 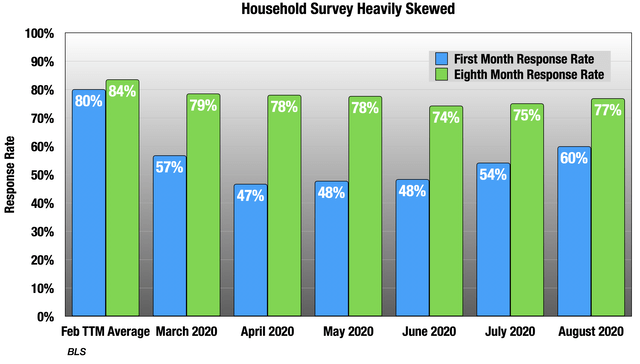 So, in August, the survey was heavily skewed to households that onboarded in January through April. Moreover, the skewness has been getting worse, as households that began pre-pandemic cycle out of the survey. There is no telling how this sort of large sampling error affects the results, but it throws all the assumptions that undergird survey research out the window.

The other big methodological issue has been coding error by the Census interviewers. Since it’s now under 1 pp of unemployment rate, I won’t go into the details, but that I’m still talking about it this late in the game is amazing.

The upshot is that we really don’t know what the unemployment rate is, and we are getting very different answers all over the place. For example, beginning in April, the Dallas Fed has adopted a survey from two economists at Arizona State and Virginia Commonwealth called the Real Time Population Survey. It takes the household survey and strips it down to its bare bones. So, it is a much shorter survey, but done twice monthly.

Since May, the RPS has shown a much higher rate than the official number, even adjusted for the coding error. 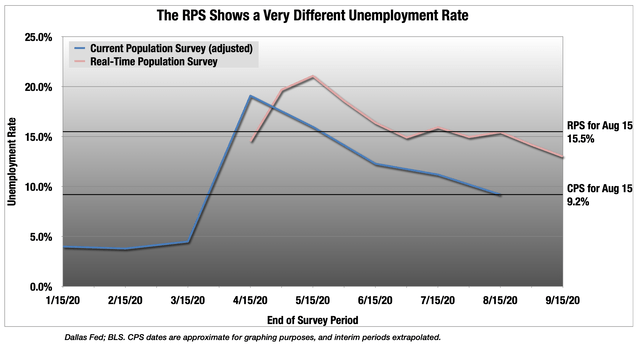 So, for the same period in August, the RPS is 6.3 pp higher than the official number. Which is right? Neither? No one knows for sure.

So, the first thing I will be looking at in the household survey is to see if they have finally sorted out their methodological issues, because we can’t trust the numbers if they have not.

Looking Ahead to Q3

Next month, we get Q3 GDP, and we are likely to see a very large headline number, an all-time record. The headline rate is QoQ annualized. Under normal circumstances, this makes sense, as it gives us an easy way to compare QoQ and YoY numbers.

But annualized a quarterly growth rate means taking the QoQ rate and taking it to the fourth power, compounding the quarterly rate over 4 quarters. With normal growth, this is very close to just multiplying by 4, but when the growth rates are large, the annualization magnifies this for positive numbers and shrinks it for negative numbers. GDPNow, the Atlanta Fed’s “nowcast” of Q3 GDP, is at 32% for Q3, what would be an all-time record. 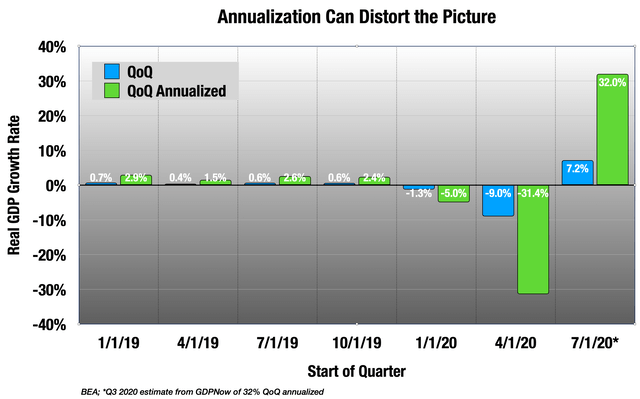 So, growth rates do not tell the story as well as levels.

No one will pay attention to any of this, of course.

I’ll be back next week to wrap all this up once we get the numbers, which will also include revisions of previous months that may be large.