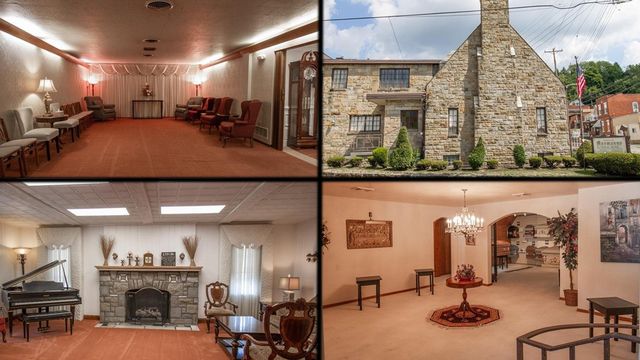 An old stone building just outside Pittsburgh with more than 6,400 square feet of space could be a great candidate for conversion into a single-family home.

Built in 1930, the building on Seventh Street in McKees Rocks, PA, has been a funeral home for decades.

“[The owner] is only doing about one viewing a month at this location, so he decided it was time to sell it,” says the listing agent, Gary Norris, adding that there’s another funeral home nearby.

The first floor functions as the current funeral home space and measures 4,400 square feet. Listing photos show wide-open spaces for mourners to congregate, as well as a glimpse into an area used as a showroom for coffins.

“This property could be used for a lot of different things. The upstairs floor was lived in by the former funeral home owner, so you can live up there—and there’s a patio out back,” Norris says.

But the funeral home isn’t the only selling point of this particular property. A buyer can instantly become a local land baron.

For $495,000, a buyer will acquire a total of four parcels and two parking lots. On those parcels, you’ll find three rental homes, as well as the historic stone building.

As for the nearly century-old funeral home, Norris says, “It’s a beautiful building. You have the slate roof, the stonework. The walls are authentic Italian plaster, and the plasterwork is gorgeous inside.”

Norris says the neighborhood is a suburb of Pittsburgh, close to neighborhoods that have seen a turnaround in property values and appreciation.

He adds, describing this area on the northwest outskirts of the Steel City, “It’s just been an area that I’ve always thought should be turned around at some point, but it just hasn’t gotten the attention yet.”

Norris says that while converting the property to a home is possible, it may not be the best use of the space.

A buyer would need to be daring, in more ways than one. Norris thinks the building would be ideal for a religious organization or nonprofit.

Moving into the space would take some work. Although there are toilets and sinks, there are no full bathrooms in the main part of the building, which houses the funeral home. It has a few kitchen appliances and cabinets, but not a full kitchen.

“You’re going to have to pull all that carpeting out on the first floor,” Norris explains.

With the typical open layout of a funeral home, that floor would have to be completely redone, and since it would be necessary to redesign the layout, he says, a conversion could end up being prohibitively costly.

The area is lower or moderate income, Norris explains, and if the freshly converted funeral home were to be put on the market after a number of expensive improvements, there would be no comparable properties in the area.

He describes the cost of buying the funeral home and fixing it up to live in as a “white elephant compared to other properties.”

Whatever the outcome, it will take a unique buyer to step up. Norris points out that since the building has been there for so long, it is well-known in the community.

“It’s not for everybody,” he says.

“You can do a lot of different things with it. It’s just that it was a funeral home, and there is a stigma that will go with that, there’s no doubt about it,” he adds.

“Some people might go, ‘Oh, it’s awesome to live in an old funeral home,’ but I think most people will say it’s kind of a kind of sacred structure.”

The post Is It Creepy To Live in a Place Where Coffins Are Sold? appeared first on Real Estate News & Insights | realtor.com®.