On Thursday morning, the Institute for Supply Management published its monthly Manufacturing Report for September. The latest headline Purchasing Managers Index (PMI) was 55.4, a decrease of 0.6 from 56.0 the previous month. The headline number was below the Investing.com forecast of 56.4 percent.

Here is the key analysis from the report:

“After the coronavirus (COVID-19) pandemic brought manufacturing activity to historic lows, the sector continued its recovery in September. Survey Committee members reported that their companies and suppliers continue to operate in reconfigured factories and are becoming more proficient at maintaining output. Panel sentiment was optimistic (2.3 positive comments for every cautious comment), an improvement compared to August. Demand expanded, with the (1) New Orders Index growing at strong levels, supported by the New Export Orders Index expanding moderately, (2) Customers’ Inventories Index at its lowest figure since June 2010, a level considered a positive for future production, and the (3) Backlog of Orders Index expanding at a faster rate compared to the prior two months. Consumption (measured by the Production and Employment indexes) contributed positively (a combined 0.9-percentage point increase) to the PMI® calculation, with five of the top six industries continuing to expand output strongly. Employment neared expansion territory for the first time since July 2019. Inputs – expressed as supplier deliveries, inventories and imports – continued to indicate input-driven constraints to further production expansion, but at slower rates compared to August. Inventory levels contracted again due to strong production output and supplier delivery difficulties. Overall, inputs improved compared to August and contributed positively to the PMI® calculation. (The Supplier Deliveries and Inventories indexes directly factor into the PMI®; the Imports Index does not.) Prices continued to expand at higher rates, reflecting a continued shift to seller pricing power – a positive for new-order growth.

“Manufacturing performed well in the month with demand, consumption and inputs registering growth indicative of a normal expansion cycle. While certain industry sectors are experiencing difficulties that will continue in the near term, the manufacturing community as a whole has learned to conduct business effectively and deal with the variables imposed by the COVID-19 pandemic,” says Fiore. (See report)

Here is the table of PMI components. 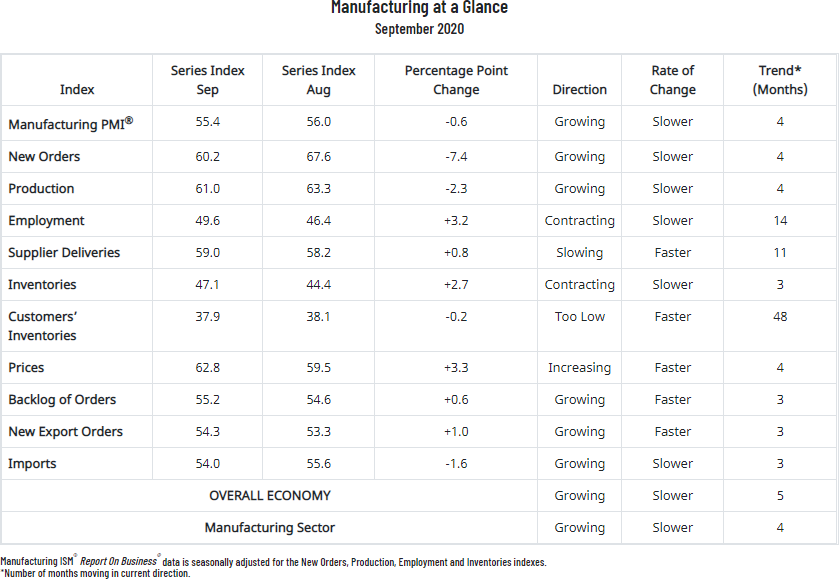 The chart below shows the Manufacturing Composite series, which stretches back to 1948. The eleven recessions during this time frame are indicated along with the index value the month before the recession starts. 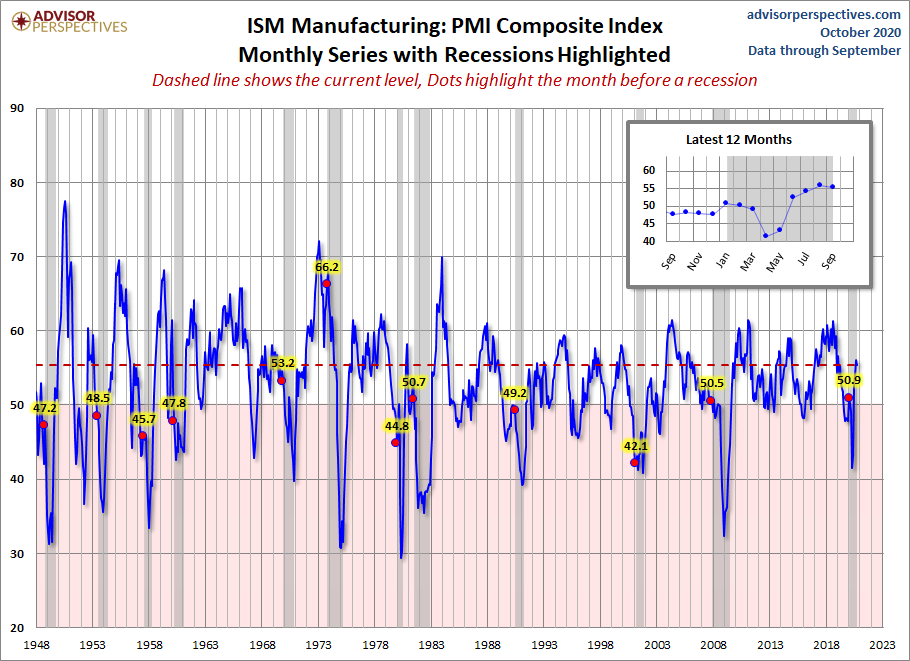 For a diffusion index, the latest reading is 55.4 and indicates expansion. What sort of correlation does that have with the months before the start of recessions? Check out the red dots in the chart above.

Here is a closer look at the series beginning at the turn of the century. 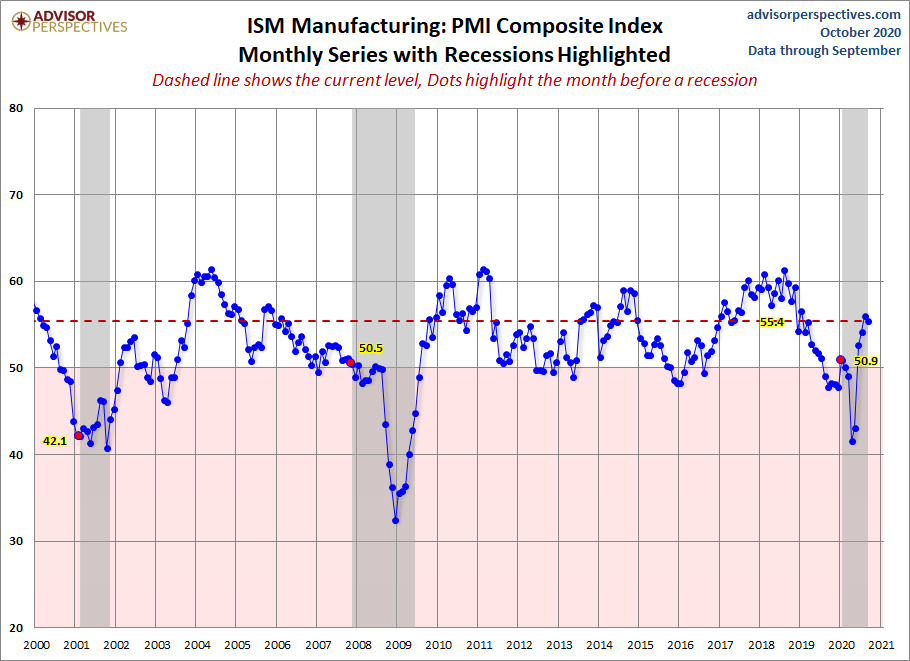 Note: This commentary used the FRED USRECP series (Peak through the Period preceding the Trough) to highlight the recessions in the charts above. For example, the NBER dates the last cycle peak as December 2007, the trough as June 2009 and the duration as 18 months. The USRECP series thus flags December 2007 as the start of the recession and May 2009 as the last month of the recession, giving us the 18-month duration. The dot for the last recession in the charts above is thus for November 2007. The “Peak through the Period preceding the Trough” series is the one FRED uses in its monthly charts, as illustrated here.