This is part of a monthly series where we update readers on notable share price moves and rating changes in our research coverage. The goal is to highlight the most attractive opportunities each month and also to provide a full track record of our research. Similar content previously formed part of our monthly fund updates.

The chart below shows the latest forecasted annualized returns of key companies in our coverage, along with their current and assumed exit P/E multiples; over the past few months, we have started including explicit (but still illustrative) forecasted returns in our research:

A higher return does not necessarily mean a better investment – the figures are illustrative and, as base-case forecasts, do not reflect the risk profile and qualitative aspects of each investment case.

Charter (CHTR) is currently our top Buy, with an expected annualized return of nearly 30%. The company is #1 in U.S. cable by size, benefiting from the sector’s highly-recurring revenues and the structural growth in broadband internet consumption. Charter has been growing its EBITDA reliably at about 6% annually since the Time Warner Cable acquisition in 2016, and saw growth accelerated to 7.4% in H1 2020. Even with the beginning of cash federal taxes from late 2021, we expect Free Cash Flow to close to double between 2019 and 2023 (from $5.5bn to $10.7bn), and, with surplus FCF and new borrowings helping to reduce the share count by 20%, FCF Per Share to more than double to nearly $57, so that the share price would also more than double from the current $624.

Tobacco stocks feature prominently in our to Buys, including Altria expecting an annualized return of 25%+ and British American Tobacco (BTI) (referred here as “BAT”) expecting one of high-teens. In both cases, upward re-ratings contribute the largest component of the expected returns, with Altria’s P/E to rise from 9.1x to 12.0x, and BAT’s from 8.6x to 10.0x. Dividends contribute account for the next largest component, being a high-single-digit percentage annual return for each stock (8.9% for Altria and 7.6% for BAT). We only assume modest post-2020 EPS growth (6.0% for Altria and 2.5% for BAT), so it is the stability of current earnings, which would fund the dividends and drive the upward re-ratings, that is the most critical to our investment cases.

On the other end of the spectrum, some stocks are expected to provide solid returns even with significant de-ratings. An example of this is PayPal, whose P/E we assume will fall from 63.5x (on 2019 EPS) to 45.0x. Spread over about 3.5 years, the de-rating would represent a high-single-digit percent headwind to annualized returns, but EPS growth is so strong that the overall annualized return is expected to be still above 10%.

L’Oréal (OTCPK:LRLCF) and Facebook (FB) now have forecasted annualized returns that are below 10%. In both cases, the interruption to EPS growth by COVID-19 means that the medium-term EPS CAGR is expected to be below 10% and, with P/E multiples assumed to be roughly flat (at 36.0x for L’Oréal and 30.0x for Facebook), would result in annualized returns being below 10% as well. We have retained our Buy ratings on both stocks, due to the uniquely high quality of their businesses; we may be too conservative with our exit multiples, especially with Facebook.

The performances last month of all the companies in our coverage universe, along with their year-to-date and full historic performances, are below: 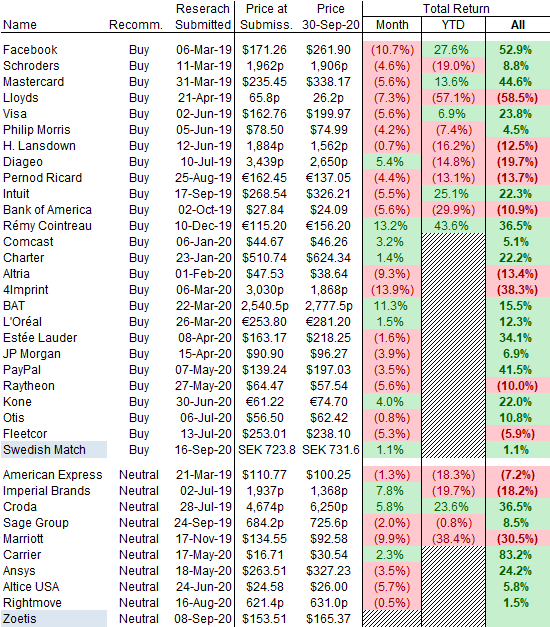 Notable gains and losses (including dividends) during September included:

Rémy Cointreau (OTCPK:REMYF) (Buy-rated) (+13.2%) – Rémy Cointreau’s share price reached new all-time highs in September on very little news, and has now returned 36.5% since our initial Buy rating in December 2019. On FY20 (ending March) financials, the stock was trading at a 66.3x P/E and a 0.6% Dividend Yield at month end. With its sales split 45/30/25 between Americas, APAC and EMEA, it may have benefited from improving investor sentiment towards at-home alcohol consumption in the U.S. and a partial recovery from COVID-19 in Asian countries, although the company’s relatively high exposure to Travel Retail in Hong Kong is likely to remain a headwind. With its unique portfolio of high-quality brands, we are not changing our rating at this point, but upside now looks much more limited, and we have the stock under review.

British American Tobacco (Buy-rated) (+11.3%) – BAT shares benefited from the 3.5% depreciation of the U.K. pound against the U.S. dollar during the month, as 44% of BAT’s EBIT is from the U.S. (in FY19); U.K. companies with global earnings also appeared to be in favor among U.K. fund managers as the outlook on U.K.-E.U. trade talks worsened. Anecdotally, BAT has been aggressive in promoting e-vapor and nicotine pouches, including on price, but the effect is hard to quantify. There have been relatively little other news since H1 FY20 results in early August. BAT’s current valuation, based on recent financials, is slightly more “expensive” than Altria (Buy-rated) but much “cheaper” than Philip Morris (PM) (Buy-rated). However, we consider the latter two stocks more attractive once growth and risks are taken into account.

Diageo (DEO) (Buy-rated) (+5.4%) – Diageo’s share price was volatile through September, touching a 6-month low on September 1 but finished the month higher after a boost from the company’s AGM update on September 28. Management revised its outlook upwards, from merely seeing sequential improvements in Q1 (Jul-Sep) and Q2 (Oct-Dec) of FY21, to actually seeing H1 FY21 (Jul-Dec) being better than H2 FY20 (Jan-Jun), mostly thanks to a U.S. business that was “performing strongly and ahead of our expectations”.

4imprint (OTC:FRRFF) (Buy-rated) (-13.9%) – With its sub-$1bn market capitalization and exposure to discretionary marketing spend, 4imprint shares were always expected to be volatile. The weak share price in September is likely linked to deteriorating investor sentiment towards the U.S. economy, 4imprint’s primary market. The company’s sales recovered to more than 50% of the prior-year level as of August, which means it is likely slightly loss-making at present (it broke even during H1 on sales that were 34% lower year-on-year), but its $37.5m cash balance will provide a cushion. 4imprint was also highlighted as an interesting opportunity in the Financial Times’ Alphaville blog (free but requires registration) in mid-September.

Facebook (Buy-rated) (-10.7%) – Facebook’s share price decline in September represented a partial reverse of its 15.6% gain in August, and followed a general decline among large cap Technology stocks (Alphabet (GOOG) was down 10.0%, Amazon (AMZN) was down 8.8% and Microsoft (MSFT) was down 6.7%). As we approach the U.S. presidential election in November, there has been an increase in the level of controversy around Technology companies’ role in political advertising and their possible future regulation. More positively, Facebook and other digital media companies reached an agreement with advertisers during the month on the control of harmful content, further reducing the impact of a boycott that was already very limited in scale.

Marriott (MAR) (Neutral-rated) (-9.9%) – Marriott’s share price decline in September represented a partial reverse of its 22.5% gain in August. COVID-19 is clearly the most important issue for hotels and, as we approach winter when transmissions become more likely, there is little sign of a resolution in 2020. Indeed several European countries such as Spain and the U.K. have had to re-impose partial lockdown measures during the month. Marriott’s CFO Leeny Oberg, speaking at an investor conference in late September, disclosed that Revenue Per Available Room was still down 63% year-on-year in August, the shift in mix from business to leisure was limited to a few percent, and that U.S. occupancy was 60% on the Saturday night over Labor Day weekend. As explained in last month’s update, our view on the sector remains cautious.

Altria (Buy-rated) (-9.3%) – nearly all of Altria’s share price decline took place during the second half of September. It is difficult to pin-point the cause of this. On the one hand, management reaffirmed full-year 2020 earnings guidance on September 9; on the other hand, the same press release warned of a possible further impairment in the value of Altria’s stake in Juul, due to the impact of new restructuring actions announced (on September 3, with little share price reaction). The strong performance of BAT shares during the month (mentioned above) further complicates any explanation.

During September, we initiated coverage on Swedish Match (OTCPK:SWMAF), a Sweden-listed tobacco company that has a market capitalization of $13bn and two thirds of its sales in the U.S. We believe the company’s EPS could grow by 80% by 2023, driven by growth in nicotine pouches, a rapidly-growing tobacco-free Reduced Risk Product that attracts former smokers and moist snuff users. With no existing cigarette sales and only 8% of the U.S. moist snuff market, Swedish Match’s U.S. nicotine pouch sales represent entirely new revenues. It currently has a near-80% share of the nicotine pouch market in the U.S., and has key advantages in production capacity, product offering and existing momentum that we believe will help it maintain its lead. Outside nicotine pouches, Swedish Match has a solid existing business in snus, moist snuff and cigars that should still deliver a low-to-mid single-digit earnings growth even if growth in nicotine pouches were to stall. We have a forecast exit price of SEK 1,024 by 2023 year-end, compared to the current share price of SEK 732, and the stock pays a 1.7% Dividend Yield. We believe Swedish Match could deliver a mid-teens annualized return and a 50% total return over the next few years.

We downgraded Zoetis (ZTS) to Neutral in early September, having seen the stock return 37% in just over a year since we initiated our Buy rating in June 2019. Zoetis is the global leader in animal health pharmaceuticals, benefits from the structural growth in pet demand and protein consumption, and has delivered the strong earnings growth we expected. Revenues grew 10% and Net Income grew 14% in 2019 and, even with COVID-19, both revenues and Net Income grew 4% in Q2 2020 (all figures on constant currency). However, the stock has also re-rated upwards more than we expected, to a 41.8x P/E and an 1.7% FCF Yield on 2019 financials, which we believe would limit its annualized return to a high-single-digit over the next few years. We changed our rating to Neutral accordingly.

Our previous stock ratings are listed below. Our previous Buy rating on Zoetis has been added to the list after we downgraded the stock to Neutral. 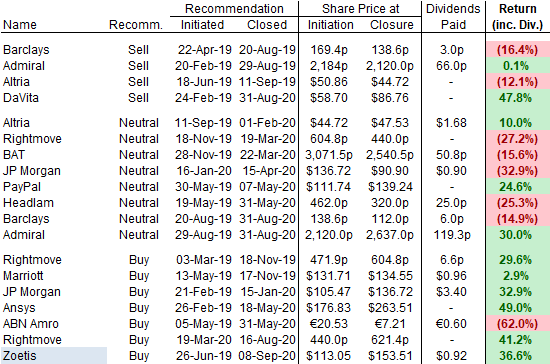 Note: A track record of my past recommendations can be found here.

Disclosure: I am/we are long NEARLY ALL THE STOCKS MENTIONED. I wrote this article myself, and it expresses my own opinions. I am not receiving compensation for it (other than from Seeking Alpha). I have no business relationship with any company whose stock is mentioned in this article.