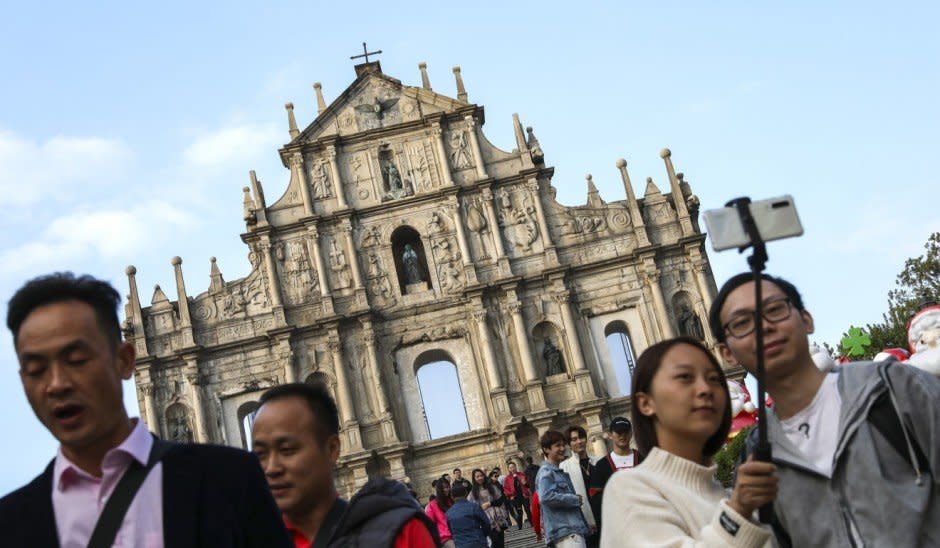 He started as a cook in the Michelin-starred Antonio Restaurant, and then quickly rose through the ranks to become head chef in just three years. “The opportunities are definitely better in Macau as many hotels, casinos and resorts have opened here,” said the 31-year-old.

Last year, he was the given the task of opening Paulaner Brahaus, a franchised German restaurant in the former Portuguese colony. Tavares was on track to open in late January when the Covid-19 outbreak in China brought tourism to a standstill, disrupting plans and pushing back the opening of the 150-seat outlet by nearly a year to December.

Tavares’ predicament and those linked to the city’s tourism industry show that Macau’s reliance on gaming, tourism and affiliated services is hurting its economy as it accounted for 70 per cent of its revenues in the first eight months of this year.

Macau needs to move quickly to diversify its economy to provide new job opportunities and income sources for its growing population, especially in light of the havoc wrecked to its mainstay tourism industry by the coronavirus pandemic, say analysts and veteran businessmen.

Just before the Covid-19 pandemic derailed the city’s economy, Beijing announced a raft of policies in December last year aimed at diversifying Macau’s economy and forging closer integration with the Greater Bay Area by building its financial services industry, while maintaining its position as a leading gaming and tourism centre.

President Xi Jinping, during his three-day visit to Macau in December last year to mark the 20th anniversary of its return from Portuguese to Chinese rule, backed the city to develop into a service platform for commercial and trade cooperation between China and Portuguese-speaking countries. Xi also urged Macau to seize the opportunities arising from the Belt and Road Initiative and Greater Bay Area projects.

Macau government projections show by 2040 the population is expected to increase by 18 per cent to 808,000 from 685,400 at present. This means the government has to act fast to maintain its per capita GDP of US$84,096, one of the world’s highest, according to 2019 World Bank data.

“The upcoming retendering of the six casino concessionaires would be crucial to the development of Macau and take it to the next level,” Allan Zeman, non-executive chairman at Wynn Macau, told the Post in an interview late last month.

All six casino licence holders – Las Vegas Sands, MGM Resorts and Wynn Resorts from the US, Melco International Development and Galaxy Entertainment from Hong Kong, and Macau-based SJM Holdings, the gaming business of the late “King of Gambling” Stanley Ho – will see their concessions expire in June 2022.

“Gaming operators are looking at and working on [new projects],” said Zeman. However, he added that the gaming operators are reluctant to commit wholeheartedly as there has been no word from the government on their licence renewal.

“I think once there is a green light, they will move forward,” said Zeman, who is best known as the founder of Lan Kwai Fong, Hong Kong’s nightlife district.

Industry experts have long been critical of existing casino operators’ heavily reliance on high rollers from mainland China, with visitors from China accounting for more than 70 per cent of Macau’s tourists.

At present, nearly 80 to 90 per cent of the gaming revenue comes from the mainland, said Ben Lee, managing partner at IGamiX Management and Consulting. “I don’t think this is what the government intended to achieve when it opened up the casino monopoly [in 2001],” he said, adding that the Macau government planned on it being more like Las Vegas, as an international tourism centre.

Zeman, however, said that it was natural for Macau to get most of its visitors from China because of its proximity, 1.4 billion population and status as the only place outside the mainland where gambling is legal.

He said that Las Vegas first started off with a focus on gambling for many years and eventually brought some top entertainment shows to its hotels to become a leading international tourism and gaming destination. He added that Macau has gone through a similar phase, and as the world’s top gaming centre it now has the platform to become the world’s No 1 entertainment centre by bringing the biggest names in the music industry and host major international sports events.

Zeman said Wynn Resorts was in the process of diversifying its entertainment offerings with the Crystal Pavilion at Wynn Palace, adding that construction on the project’s initial phase will start in late 2021. “Crystal Pavilion will become a unique world-class cultural destination, incorporating art, theatre and interactive installations, expansive food and beverage offerings, additional hotel rooms, and several signature entertainment features,” according to Wynn’s interim report.

IGamiX’s Lee said that to prevent “bait and switch” strategies, the Macau government will need a system for monitoring, enforcement and penalties should the casino operators fail to deliver on the promised non-gaming facilities after successfully winning the tender again in 2022.

Macau badly needs these non-gaming facilities to attract international tourists to broaden its revenue sources as gaming income has declined for 12 straight months up to September. In the first nine months of the year, the sector’s revenue fell 82 per cent to 38.6 billion patacas (US$4.8 billion), from 220.29 billion patacas a year ago, according to official data. Even the VIP segment which accounts for half of the sector’s revenues, saw a 77 per cent decline in the first two quarters of the year, compared to a year earlier.

This was inevitable considering tourist arrivals in Macau, whose historic city centre is a Unesco World Heritage Site, have tumbled 87 per cent to 3.57 million in the first eight months of the year because of border restrictions to prevent the spread of Covid-19, official figures show.

As a result Macau’s gross domestic product sank by 67.8 per cent year on year in the second quarter of 2020, the Statistics and Census Service said. As has been the case with economies around the world, the Macau government stepped in to help businesses and households affected by the Covid-19-induced downturn.

“With tourism being one of Macau’s core economic pillars, the Macau government came up with financial stimulus packages, providing tax breaks and cash aid to affected companies and households as well as affected industries and employers to help revitalise the hard-hit economy,” said Maria Helena de Senna Fernandes, director of Macau’s tourism office in a written reply.

Carlos Siu Lam, associate professor at Centre for Gaming and Tourism Studies of Macao Polytechnic Institute, said that Macau should reduce its reliance on VIP gamers and expand its non-gaming offerings. “With increased emphasis on the non-gaming sector, Macau will be able to draw different types of tourists, from young couples to families and even retirees,” he said.

Macau’s other much-publicised economic diversification plans include launching a Nasdaq-like stock exchange, which would offer another alternative destination for start-ups in the bay area to raise capital, and tap into the fundraising needs of the Portuguese-speaking world to which Macau belongs. China’s first-quarter trade with Lusophone countries reached US$31.97 billion, government data showed.

In June, the Chinese government announced a plan to introduce a wealth management connect scheme which includes Macau financial firms. The scheme, which is yet to have a launch date, will allow bay area residents to buy investment products via banks in Hong Kong and Macau, while residents of Hong Kong and Macau can also invest in mainland investment products sold by the mainland banks.

Similarly, there has not been much progress since last October when the Monetary Authority of Macau said it was conducting a feasibility study to establish a securities exchange. Besides, it has to compete with two established stock exchanges in Hong Kong and Shenzhen, which have about 4,700 listed companies and a combined market value of about US$10 trillion.

Macau’s Chief Executive Ho Iat-seng reiterated those plans in his policy address in April, saying the city is exploring ways to introduce a yuan-trading stock exchange and further develop its insurance and banking system. “Macau and Guangdong would also look at the feasibility of building an international trade centre serving China and Portuguese-speaking countries to further their economic and trade ties,” Ho added.

How quickly the Macau government moves to implement the plan remains to be seen.

“Bond market makes sense for Macau, not a stock exchange, as it would not be competing with neighbouring stock exchanges in Hong Kong and Shenzhen,” said Patrick Rozario, managing director of accounting and advisory firm Moore Hong Kong, whose family is from Macau.

The use of the yuan in Macau has grown substantially over the past one year, with cross border yuan trade settlement surging 23 per cent last year to 2.58 trillion yuan (US$378.44 billion) while yuan deposits rose 4 per cent to 55.97 billion patacas (US$7 billion), according to Monetary Authority of Macao data.

Clement Chan, managing director of BDO, summed up Macau’s predicament, saying the long-term success of Macau’s diversification plan depends on whether it can define a role for itself as an offshore yuan trading centre and complement the two existing exchanges in Hong Kong and Shenzhen.

“It is a matter of finding a niche,” he said.