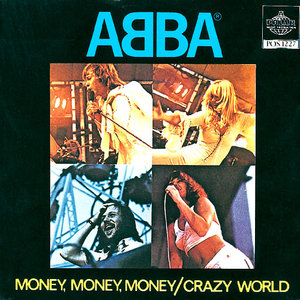 “Money, Money, Money” is a song recorded by Swedish pop group ABBA, written by Benny Andersson and Björn Ulvaeus. It was released as a single on 1 November 1976, as the follow-up to “Dancing Queen” (both from the album Arrival). The B-side, “Crazy World”, was recorded in 1974 during the sessions for the album ABBA.

The song (originally titled “Gypsy Girl”)[1] is sung from the viewpoint of a woman who, despite hard work, can barely keep her finances in surplus, and therefore desires a well-off man.

ABBA perform parts of “Money, Money, Money” live in the 1977 film ABBA: The Movie. In the popular musical, Mamma Mia!, the song is sung by the character of Donna as she explains how hard she has to work to keep the taverna in order and her dreams of a better life. In the 2008 film, Meryl Streep sings the song.

The video for “Money, Money, Money” was inspired by the film Cabaret, showing Frida wearing a hat typical of the 1920s. The video varies from her determined presence in reality during the verses, to the dream sequences about money and “the good life” in the chorus. The video’s director, Lasse Hallström, later acknowledged “Money, Money, Money” as the best ABBA video he ever directed.[2]

An alternate music video was filmed for the TV special ABBA-DABBA-DOOO!! featuring Agnetha and Frida in 1930s style flapper dresses, with feathers in their hair.[3]