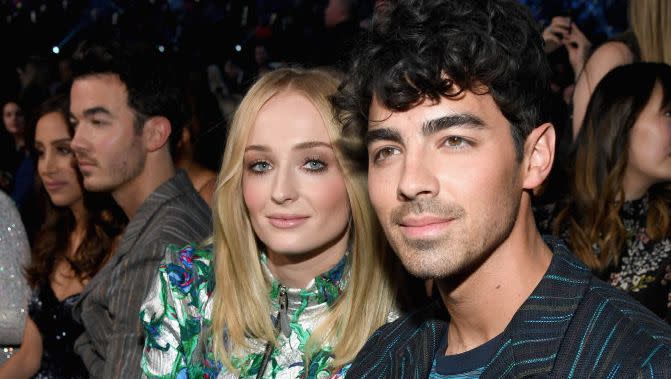 Game of Thrones star Sophie Turner chose to keep her pregnancy with her first child with Joe Jonas private while she was expecting. The actress and her singer husband never confirmed they were having a baby until their rep announced her birth. But now, Turner is ready to give her fans an intimate look at that time in her life. Turner shared three photos yesterday from her pregnancy that Jonas took—the first she has ever posted on social media. She tagged Jonas in one shot of her at Hotel Bel-Air and his photography account Cup of Joe in all three.

Jonas appeared to share another shot from that Hotel Bel-Air visit on his own Instagram. “Facemask but make it Phantom,” he captioned it, also tagging his photography account Cup of Joe.

Jonas and Turner welcomed their daughter Willa at the end of July. “Sophie Turner and Joe Jonas are delighted to announce the birth of their baby,” their rep said in a statement.

Entertainment Tonight got detail from a source on how their first days with the baby were. “Joe and Sophie welcomed a baby girl last Wednesday in LA [July 22] and are over the moon,” the outlet’s source said. “The couple is already obsessed and can’t stop gloating about their new addition. The couple is taking time to enjoy this special moment and have only shared the news and updates with family and friends. With the pandemic, Joe and Sophie have been very cautious about who is around them and their little girl.”