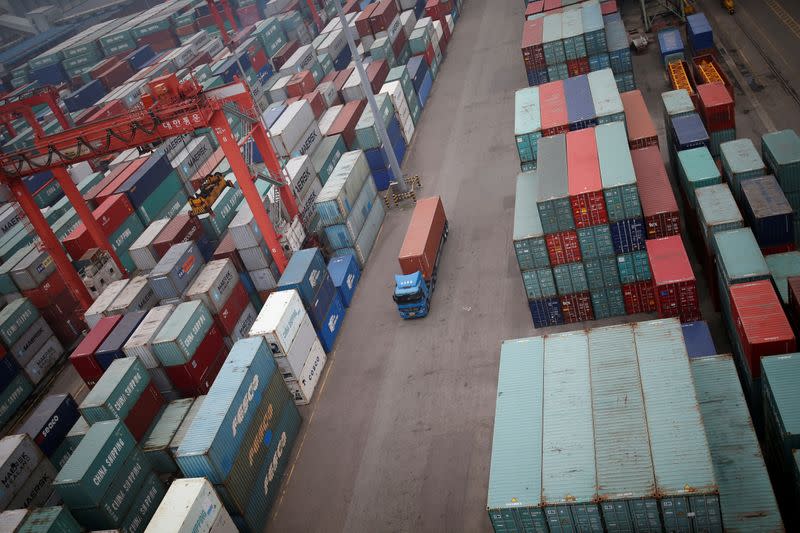 By Joori Roh and Jihoon Lee

SEOUL (Reuters) – South Korea’s exports likely grew for the first time in seven months in September due to more working days than a year earlier and heavy shipments of microchips as China’s Huawei Technologies stockpiled ahead of U.S. sanctions, a Reuters poll showed.

Going forward, economists surveyed by Reuters expected South Korea’s exports to suffer as major overseas markets have been hit by second waves of coronavirus, which will keep global demand subdued.

September shipments were seen rising 2.0% from a year earlier, according to a median estimate of 18 economists, the first growth since February and rebounding sharply from a 10.1% plunge in August.

There are 23 working days this month, 2.5 days more than a year earlier, as the Chuseok holiday fell in mid-September last year.

Economists have attributed export growth in preliminary data to stockpiling by Huawei ahead of U.S. sanctions which kicked in on Sept. 15.

But economists worry that the virus resurgence at home and abroad may put a brake on exports recovery.

“The (exports) recovery ahead is unlikely to be smooth. The rebound in global demand will be buffeted by second waves of the coronavirus and the economic hangovers from dealing with the pandemic,” said Alex Holmes, economist of Capital Economics.

South Korea on Friday said it would impose tighter restrictions during the Chuseok autumn holiday weeks when people traditionally reunite with families, after infections at a church and political rally in August sparked a new wave of coronavirus outbreaks.

It reported a total 23,661 cases and 406 deaths as of Sunday midnight, though the number of new cases at 50 was the lowest since the resurgence of the disease in August.

Meanwhile, 16 economists predicted industrial output in August would decline by a seasonally adjusted 1.5% month-on-month, compared with a 1.6% growth in July.