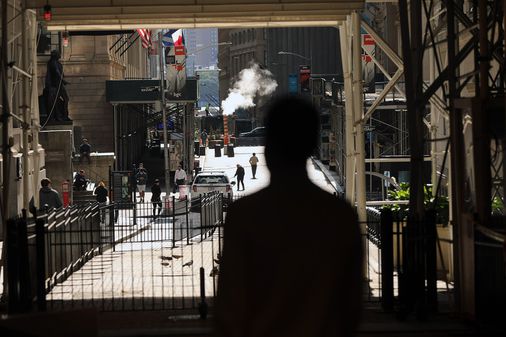 NEW YORK (AP) — Wall Street is rallying Wednesday on optimism for the economy and rising hope that Washington may pierce through its paralyzing partisanship to offer more aid for it.

The S&P 500 was up 1 percent in early trading, on pace to more than reverse the prior day’s losses. After setting a record high early this month, the benchmark index has been mostly tumbling on a wide range of worries, and it’s still on pace for a 3.7 percent drop in September, which would be its first monthly loss since March.

Stocks and Treasury yields rose following a stronger-than-expected report on hiring by private employers. They then accelerated amid revived hopes that the US government could soon deliver more support for the economy. Treasury Secretary Steven Mnuchin said at a conference presented by CNBC and Institutional Investor that he will talk with House Speaker Nancy Pelosi again this afternoon, “and I hope we can get something done.”

Investors have been frustrated waiting for Congress to deliver more stimulus after weekly unemployment benefits and other aid it had earlier approved for the economy expired. They have long called such programs crucial for an economy that’s still struggling under the weight of the coronavirus pandemic.

The number of layoffs sweeping the country has remained stubbornly high, and other areas of the economy have seen growth slow since the Congressional aid went away.

But a report from payroll processor ADP on Wednesday gave some encouragement. It said hiring by private employers accelerated this month, with 749,000 jobs added versus economists’ expectations for 605,000.

That raises hopes for the federal government’s more comprehensive jobs report, which arrives on Friday. For that, economists had been expecting to see hiring slowed to 850,000 from 1.4 million in August.

This month’s jobs report will take on even more importance than usual because it will be the final one released before Election Day in November.

Tuesday night’s debate between President Donald Trump and the Democratic nominee, Joe Biden, was the first of this election season, and it amplified some of the market’s concerns. Trump said it may take months to learn the election’s results, and such a long period of uncertainty could make an already shaky market even more volatile.

But several analysts said they didn’t see the debate having a big effect on the stock market, whose path depends much more on what happens with corporate profits, interest rates and the coronavirus pandemic than who sits in the White House.

“Last night was pretty much a nothing burger from a market perspective, other than perhaps suggesting more uncertainty in the weeks ahead, which could continue to drive volatility,” said Mike Loewengart, managing director of investment strategy at E-Trade Financial.

Trump again lobbed claims of fraud at the voting process, even when the head of the FBI has said there has not been any significant coordinated national voter fraud. The tone was combative through the night, with plenty of insults and talking over one another, and reflective of the country’s deepening partisan divide.

Shares of data-mining outfit Palantir are set to begin trading on Wednesday, 17 years after it was born with the help of CIA seed money. The company isn’t selling new shares to raise money. Instead, it’s listing existing shares for public trading.

In Europe, Germany’s DAX was close to flat after shaking off an earlier loss. The CAC 40 in Paris rose 0.1 percent, and London’s FTSE 100 added 0.2 percent.

The yield on the 10-year Treasury was holding steady at 0.66 percent after erasing earlier losses.