It’s sad to say, but the tax risks I talked about in my last article about Tatneft (OTCPK:OAOFY) have started to materialize. Even though oil prices stood more or less the same, the stock plummeted by 18% in just one month, approaching March levels.

I would be glad to tell you that these risks are overdone, and the stock price looks like a bargain – but not this time. The effect of taxes is quite sensitive, so the decline in the share price looks more or less justified as the company won’t please investors with dividends to the same extent as it did in the past.

How New Taxes Will Affect Tatneft

In mid-September, the Ministry of Finance announced its plan to abolish tax benefits for old oil fields and the production of super-viscous oil. Together with the adjustment of the excess profits tax (EPT) announced in the summer, the Russian oil industry may lose about 300 billion rubles ($3.8 bn) per year. On September 30, the State Duma approved the changes in taxation, and now, it has been adopted by the Federation Council.

Therefore, the elimination of this tax benefit will have a huge negative impact on the dividend base. In addition, an increase in the tax burden may negatively affect the company’s investment program. At the end of 2019, Tatneft invested 14.6 billion rubles in the development of super-viscous oil fields, or 15.2% of the company’s capex for the year.

In the short term, the investment program cuts may partially offset the impact of higher taxes on free cash flow. However, in the longer term, a reduction in capital expenditures may cause a drop in oil production and a deterioration of the company’s financials.

In the end, the government returned a relatively small part of tax benefits to Tatneft and other oil companies. Tatneft got a right for a tax benefit of up to 36 billion rubles in three years (from 2021 to 2023), or a maximum of 12 billion rubles per year.

This initiative is definitely better than nothing and, according to analysts’ estimates, will reduce the negative effect on EBITDA for Tatneft from 18% to 13% in 2021 if the company receives the tax benefit in full.

Tatneft shareholders recently approved the previously recommended dividends for six months of 2020 in the amount of 9.94 rubles per share, which implies a dividend yield of 2.2% – a relatively modest payment. However, this is just the first payment out of three that the company pays for a year.

It’s hard to predict future dividends in such an unpredictable environment, but it seems that, due to changes in taxation and constrained oil production, Tatneft may lose its status of a flagship dividend stock of the Russian market.

It wouldn’t be so upsetting to talk about the tax hikes if not the gigantic reserves Russia has on its balance sheet. Just 2% of the $585 bn reserves (~$12 bn) would be enough to cover the equivalent amount of raised taxes for the next three years. Instead, the government acted, in my opinion, in a less optimal way, directly affecting the attractiveness of Russian stocks. Investors should be aware of these policy risks as they keep valuations of Russian companies chronically suppressed, alongside with other country-specific risks. 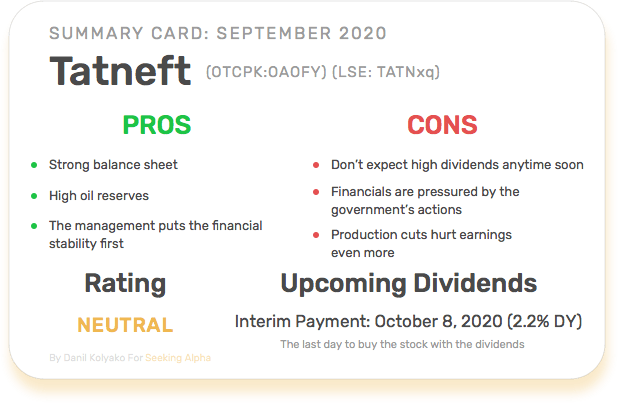