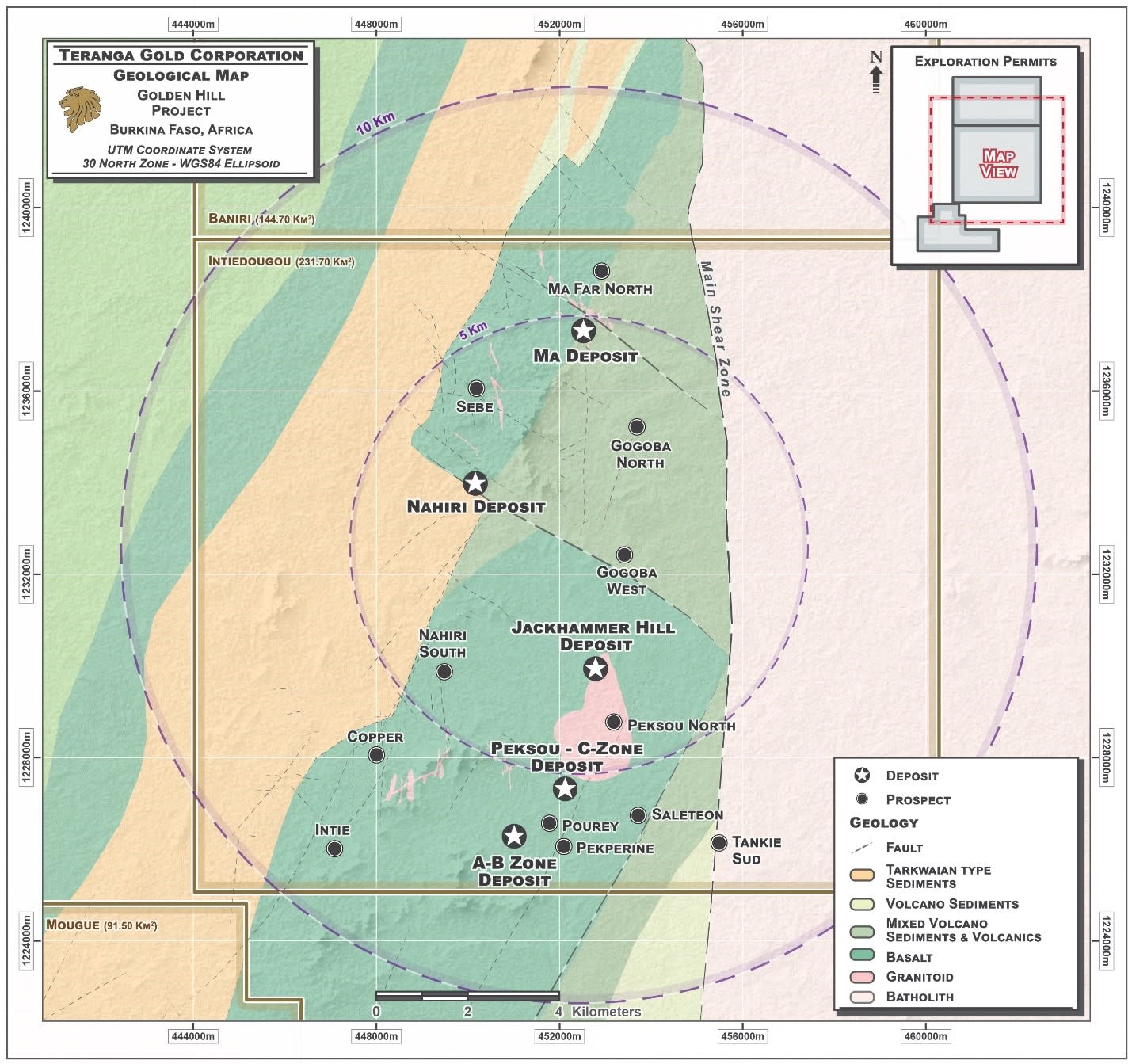 Mine license application expected to be submitted by year–end;
$15 million earmarked through 2021 for drilling

(All amounts are in U.S. dollars unless otherwise stated)

Wholly-owned by Teranga, Golden Hill is a key component of the Company’s growth pipeline and has delivered multiple near-surface, high-grade, oxide gold discoveries transitioning into fresh hosted structurally controlled mineralization extending to considerable depths well below the oxide component of these mineralized bodies.

This mineral resource estimate includes the following deposits: Ma, Jackhammer Hill, Peksou/C-Zone, Nahiri and A and B-Zone (Figure 1 in Appendix). All existing mineral resources remain open to further expansion along strike and to depth, particularly at observed structurally-controlled plunging shoots where both grade and widths improve.

The current Golden Hill mineral resource estimate is based on the results from more than 900 reverse circulation and core drill holes totalling over 100,000 metres at five deposits and a number of prospects. Based on the most recent 27,000 metre drill program, the Company has increased resources at the Ma Structural Complex (Ma Deposit) to 521,000 ounces classified as Indicated and 410,000 ounces classified as Inferred, and converted resources previously classified as Inferred to the Indicated category at Peksou/C-Zone and at A and B-Zone since Golden Hill’s initial resource estimate was released in 2019.

“Drilling and preliminary engineering work to date confirms the potential for a high-grade open pit gold mine at Golden Hill. As a result, we expect to submit a mine license application in the fourth quarter,” said Richard Young, President and CEO. “We expect to spend approximately $15 million on our resource expansion program at Golden Hill through the end of 2021 in order to reach our goal of outlining a resource of between 2 and 3 million ounces of gold. Despite today’s higher gold prices, our hurdle rate for new projects remains at achieving an internal rate of return of 15% at $1,300 gold, and Golden Hill’s development will be conditional on meeting or exceeding that threshold.”

The most recent drill campaign, started in the second half of 2019, consisted of 27,000 metres that evaluated nine separate targets including four portions of the Ma Structural Complex (Main, North, East and Jonction), C-Zone, A-Zone, Peksou Basin, Copper and Gogoba West (refer to Figure 1 in Appendix). The Company continued to drill until March 2020, when the COVID-19 pandemic and associated travel restrictions required work to pause at the site. The exploration program is on track to recommence mid-October, as the rainy season ends, and is anticipated to target at least five additional zones including Gogoba North, Sebe, Nahiri, Peksou North and Pourey. Drilling is expected to focus along trend and at depth to extend components of this resource estimate and to initiate evaluation of numerous additional target areas. In addition, a further five undrilled exploration targets defined by favorable stratigraphy, structure, geochemical and geophysical signatures will be included in the broader exploration program.

“Golden Hill’s Indicated and Inferred resources have expanded as a result of the 27,000-metre drilling program completed earlier this year, and we see the opportunity to increase resources further through more drilling and the optimization work that is already underway,” said David Mallo, Vice President of Exploration. “Within our three Golden Hill exploration permits, the structural-stratigraphic mineralized host can be traced for over 32 kilometres along trend, of which we have only explored about 10 kilometres. We look forward to getting back on the ground to drill and explore along this mostly untested trend where we have identified a number of undrilled target areas with very positive geophysical signatures, within the favourable host stratigraphy, compared to those observed at our known deposits, including Ma and Jackhammer Hill.”

Metallurgical testing is ongoing at ALS Metallurgy Laboratories in Perth, Western Australia. Samples from Jackhammer Hill, Peksou and Ma were investigated during the first phase of testing. Based on the test results to date, a flowsheet featuring flotation and leaching of the flotation products has been adopted, with gold recoveries ranging from 83% to 93%. The next phase of testing is expected to investigate other deposit areas and options to optimize the current flowsheet.

Initial baseline social and environmental studies have been undertaken as part of the environmental and social impact assessment (ESIA) process. The next phase of the ESIA work will be concentrated on a resettlement action plan, biodiversity, social, hydrogeology and archaeology studies.

The risks and uncertainties that may affect forward-looking statements include, among others: the inherent risks involved in exploration and development of mineral properties, including government approvals and permitting, changes in economic conditions, changes in the worldwide price of gold and other key inputs, changes in mine plans and other factors, such as project execution delays, many of which are beyond the control of Teranga, as well as other risks and uncertainties which are more fully described in Teranga’s 2019 Annual Information Form dated March 30, 2020, and in other filings of Teranga with securities and regulatory authorities which are available on SEDAR at www.sedar.com.Teranga does not undertake any obligation to update forward-looking statements should assumptions related to these plans, estimates, projections, beliefs and opinions change. Nothing in this document should be construed as either an offer to sell or a solicitation to buy or sell Teranga securities. All references to Teranga include its subsidiaries unless the context requires otherwise.

Teranga Gold is transitioning into a mid-tier gold producer operating long-life, low-cost mines and advancing prospective exploration properties across West Africa, one of the world’s fastest growing gold jurisdictions. The top-tier gold complex created by integrating the recently acquired high-grade Massawa project with the Company’s Sabodala mine, the successful commissioning of Wahgnion, Teranga’s second gold mine and a strong pipeline of early to advanced-stage exploration assets support the continued growth of Teranga’s reserves, production and cash flow. Through its continued success and commitment to responsible mining, Teranga creates sustainable value for all stakeholders and acts as a catalyst for social, economic, and environmental development. To learn more, visit www.terangagold.com.

A figure accompanying this announcement is available at https://www.globenewswire.com/NewsRoom/AttachmentNg/df57f58c-4f4b-48bc-9ce6-33f50ce4efc2