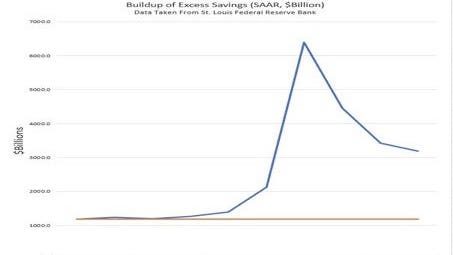 There is some speculation that because only a little more than half of the buildup in savings from the stimulus checks and enhanced unemployment benefits was spent through July, Q4 economic activity will continue to show recovery as the “savings” continues to be spent. Call this the “Excess Savings” Hypothesis.  Unfortunately, the incoming data makes this appear to be little more than “hope.”

The weekly state and PUA unemployment data continue to show a lull in the recovery, as Initial Claims (ICs) remain in the stratosphere, and the main reason that the “Excess Savings” Hypothesis appears to be a long-shot.

Ellen Zentner and her economics team at Morgan Stanley (MS) have quantified the buildup of savings and its partial drawdown in Q2 and Q3 (through July – see the chart). They hypothesize that a continuation of the drawdown back to the pre-virus average, would keep the U.S. recovery on track in Q4. To be clear, Zentner and crew give ten possible scenarios, the most bullish of which is a quick return to the pre-virus GDP if the excess savings are spent; the most bearish being no additional spending from the built-up savings.

According to MS, and, as noted by Fed Chair Powell, lower-income households were the beneficiaries of some of the government’s fiscal largesse. The lower-income households, which typically have a very low propensity to save, will likely “draw upon these savings to sustain spending in the absence of fiscal support.” (Morgan Stanley, “The Savings Float”, September 21, 2020.) The first evidence of such behavior, MS says, came in the form of a +0.6% increase in August’s retail sales. This occurred despite the elimination of government transfers as the stimulus payments ended in July.

Breaking the data down (see chart above):

For all the following reasons, in my view, it is unlikely that the remaining “excess savings” will be spent anytime soon, especially in Q4:

While the Atlanta Fed still believes that Q3 real GDP growth will be 32%, the St. Louis Fed has lowered its forecast to 19.6%! They clearly see a stalling economy in August/September because their prior GDP growth call was 30%+.

The equity markets also seem to be concerned, down now four weeks in a row. Perhaps it is because the Fed says a fiscal package is necessary and it can’t do much more, or, maybe the markets are getting electionitis.

State unemployment data, especially Initial Claims (ICs), further clarify that the economy stalled beginning in August. The “normal” ICs last February were in the 200K range as seen on the left hand side of the chart and at the top of the table (see below).

Looking at the August/September data, it appears we have been stuck in the 800K-900K range indicating no progress on the employment front for workers eligible for unemployment benefits.

PUA (Pandemic Unemployment Assistance) ICs show a similar pattern (see chart and table below). While there was some progress in July and early August (falling as low as 489K), the weekly average since has been 676K with the September 12th data right on that average and September 19th just slightly below. Weekly revisions, of late, have all been higher, a sign of the direction of the pressure.

PUA is a new unemployment benefit program initiated by the CARES Act benefitting the self-employed and gig workers. The magnitude of the unemployment problem emerges when the state and PUA ICs are combined as shown in the chart and table below. On a weekly basis, since August began, new unemployment claims have been between 1.73 million and 1.33 million! That’s not a formula for continued GDP growth. When and only when these numbers approach 500K should we begin to talk about real Recovery!

The notion that the “excess savings” from the CARES Act will keep the economy on the road to recovery isn’t realistic in my view, especially given that all the August/September data show significant economic deceleration. The Fed doesn’t think it can do much more and has told that to Congress. The financial markets appear to agree. Fiscal Stimulus Needed!