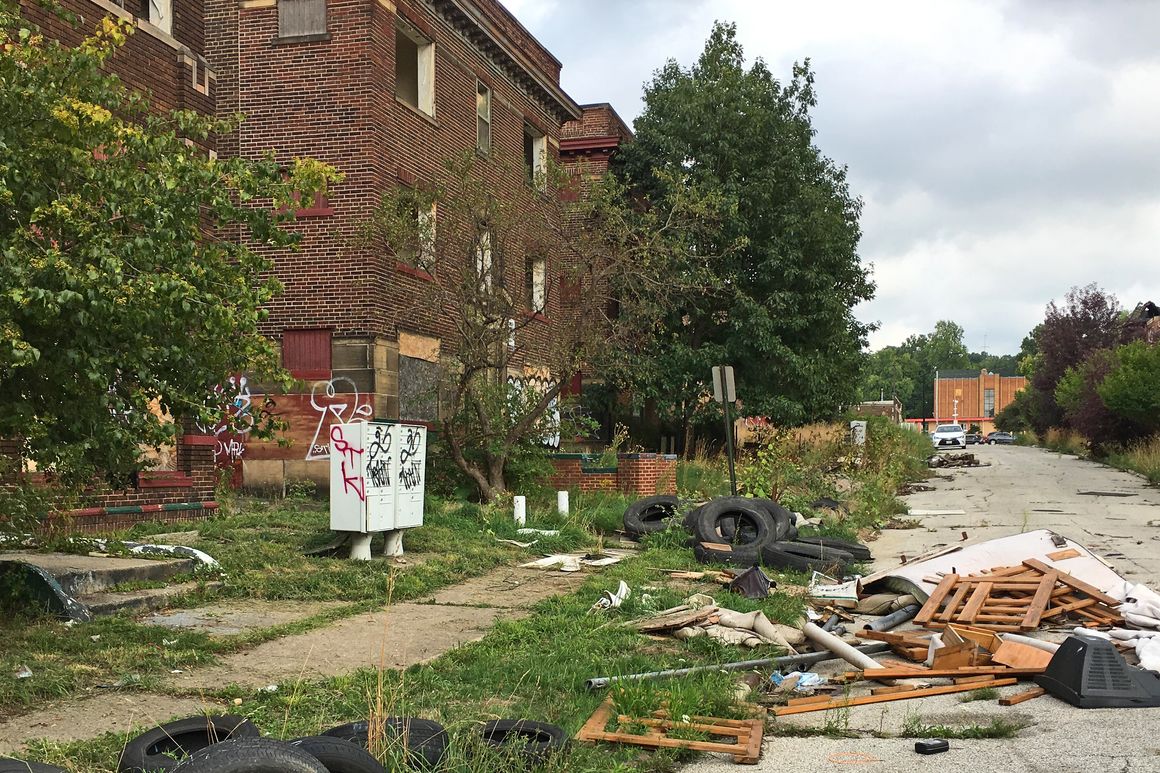 So far, opportunity zones have mostly benefited neighborhoods already on the upswing and middle-class renters. The opportunity zone program has no job guarantees and no mechanism that requires projects to benefit the poor. Nationwide criticism of the program has focused on the tax credit funding luxury apartments, hotels and office towers. And a recent study suggests the zones have actually attracted slightly fewer new jobs than areas that were eligible for the zone program, but not selected for it.

Cleveland—which is home to roughly half of the publicly announced opportunity zone projects in Ohio, according to information from the Economic Innovation Group—is a good place to get past the hype and drill down on the limitations of the program. Interviews with the developers of the projects reveal that opportunity zone funding was not essential to making the projects happen. Some of the developers even say the program could use the sort of fixes that Joe Biden has proposed.

Funds often go to projects that would have happened anyway.

Kevin Wojton bought the abandoned Masonic temple in Cleveland’s resurgent Ohio City neighborhood before the Trump tax cuts passed in 2017. He’s converting it into a rock-climbing gym, a yoga studio and a tech nonprofit. Loans from Chemical Bank, the city of Cleveland and Cuyahoga County have financed the project so far, but Wojton has also launched his own opportunity zone fund to take advantage of the Trump tax break. He says he’ll use about $100,000 from his fund as working capital to open his rock-climbing gym in 2021.

“We talked to every single opportunity zone fund in the United States, and every single one of them said, ‘Hey, when you’re ready to do a $100-million, multifamily new build, let me know,’” says Wojton, a Cleveland-area native who worked in tech company jobs in New York. “We were really frustrated at the existing OZ scene.” Wojton says his fund will invest in other small or medium-size redevelopment projects.

Wojton says the $3 million Cleveland Rocks project is creating 50 to 75 temporary construction jobs and will create 15 to 25 permanent jobs at the climbing gym and his nonprofit Flux Makerspace, plus jobs in startups the makerspace helps launch. Disadvantaged neighborhood residents, he says, can take low-cost software-development classes at the makerspace.

Ohio City’s residential real estate market is booming. It’s the oldest intact neighborhood in Cleveland, with lots of Victorians and early 20th-century homes that are popular with professionals, and plenty of new construction springing up. Still, its pockets of poverty, including two large public housing projects, helped qualify it for the opportunity zone.

Trump and others say opportunity zones benefit distressed neighborhoods. Does that include the climbing gym’s neighborhood? “The Ohio City area, exactly where we are, may not be distressed,” Wojton says, “but a couple of blocks away in any direction, yes, I think the area is distressed.”

Because of opportunity zone funding, Rosen says, his company set aside 57 of the 95 apartments for renters who self-report making $49,000 a year or less. They’re paying $950 to $1,250 in monthly rent for 550- to 900-square-foot apartments—comparable with Cleveland’s average rent of $1,123, according to the website rentcafe.com. It’s what urban-planner types call “workforce housing”—subsidized housing for the middle class. Tenants who make more than $49,000 pay $1,400 to $2,100 a month for similar square footage.

The opportunity zone tax break goes to the developer’s lender, PNC Bank, which invested $10 million in opportunity zone equity instead of a traditional mortgage and accepted a lower rate of return. Without the opportunity zone, Rosen says, “it would’ve been a purely market-rate project, if it had been a project at all.”

The building also includes a soon-to-open bakery on the first floor. Rosen says the retail space might not have been affordable to build without the opportunity zone financing. The building generated 120 construction jobs at its peak, and should generate 25 full-time jobs, he says, between the bakery and the apartments’ leasing and management office.

The Tappan stands on the edge of trendy Tremont, near a freeway intersection. Arguably, it helps extend Tremont’s relative prosperity a block or two farther toward the impoverished Clark-Fulton neighborhood.

“It’s like many cities, where you have some blocks that are coming back, and other blocks where progress is stagnant, and they’re all grouped very close together,” Rosen says. Four blocks south across I-90 lies Seymour Avenue, where three kidnapped women were found inside a reclusive bus driver’s home in 2013 after a decade in captivity. “In central Tremont, the opportunity zone might not be necessary,” Rosen says. “In southern Tremont, it is.”

Joe Biden has criticized the opportunity zone program as subsidizing too many “high-return projects, like luxury apartments.” He’s proposed reforms, including incentives for investors and developers to work with community organizations and build projects with social benefits.

Rosen supports that. “The program itself doesn’t require any workforce housing or any sustainable development,” he says. “There’s no reason why investors, lending institutions and developers can’t take advantage of this incentive and work more closely with community goals—just like with every other community development program. If you want your project to qualify for opportunity zone investment, more should be asked of you.”

A mile south of the Tremont development, MetroHealth, the county hospital, is also planning an apartment project with opportunity zone funds. The hospital hopes to break ground in 2021 on a $20-million, 100-unit complex to house MetroHealth medical residents. One- and two-bedroom apartments would rent for roughly $1,100 to $2,000 a month.

“We’re right now putting the capital stack together, and opportunity zones is one of the primary sources of funding for that project,” says Greg Zucca, MetroHealth’s director of economic and community transformation.

The 100 apartments would be part of a $60-million effort to build housing on MetroHealth-owned land. It’d bring new housing options to the Clark-Fulton neighborhood, where 47 percent of residents live in poverty. A 72-unit apartment building nearby will be affordable housing, for people making between 30 percent and 80 percent of the Cleveland area’s median income—about $21,000 to $59,000 for a family of four. That project, which may break ground next month, didn’t need opportunity zone funding, because it got a $1 million annual affordable-housing tax credit from the city and state governments.

“Opportunity zones are a way to encourage investment in this neighborhood in more market-rate-type housing,” says Zucca. “It’s difficult to entice outside investors to invest in communities like this, when they’re not going to see the rates of return they’re going to get in other communities and other downtown areas.”

So would the market-rate apartments not be possible without the opportunity zones? Zucca hedges. “It would be more difficult—don’t get me wrong—but I’m still very bullish that it would get done even without it.” MetroHealth’s participation, as a major anchor institution, helps to reduce the financial risk, Zucca says. Philanthropic funding, or low-interest loans from state and local governments, might have filled the gap.

The market-rate building will include a first-floor retail space; MetroHealth hopes to attract a grocery store. Zucca thinks the opportunity zone program could be reformed to include social impact metrics, “so that it’s not just about having the investment being done, but what are some of the community benefits?”

Ned Hill, an economic development professor at the Ohio State University, thinks that neither the climbing gym nor the Tappan nor MetroHealth’s apartments for medical residents will “affect the lives of low-income people in any major way.” Yet city halls and chambers of commerce praise the zones, Hill says, because they can add to old industrial cities’ tax bases by helping some projects “become bankable.”

Ohio’s line-drawing reflects that. The state drew an opportunity zone around NASA Glenn Research Center in suburban Brook Park, next to Cleveland Hopkins International Airport. But it didn’t draw a zone anywhere in East Cleveland, an impoverished suburb. The zones also include large parts of Cleveland’s high-poverty East Side, between downtown and the university district—but no opportunity zone projects have yet been funded there.

To help severely distressed neighborhoods, says Hill, the federal government would have to drop its reliance on tax breaks and directly subsidize economic-development projects in poor neighborhoods—something it hasn’t done much since the 1980s.

“In the ideology of the right, and the attempt to starve government, any tax cut is great, and any direct federal spending is evil,” says Hill. “Underneath this ideology is the idea that somehow a tax credit isn’t government spending, which drives most reasonable economists completely batshit crazy. Why? Because of opportunity costs: if you don’t voluntarily collect that money, you’re spending it.” Estimates suggest the zones will cost the federal government about $3.5 billion a year in lost tax revenue.

Opportunity zone supporters say the program hasn’t yet had a chance to realize its potential.

“Political timelines don’t really align with the market,” says John Lettieri, president and CEO of the Economic Innovation Group, a Washington think tank that conceived the idea of opportunity zones in 2015. “The political timeline is, after 3 years, 2½ years, you should be able to declare victory or failure today.”

But the tax break lasts through 2026. And it’s not all about real estate. It also allows for opportunity zone funds to invest in existing businesses in the zones—but the Treasury regulations for doing that weren’t finalized until late 2019. “Without regulatory action, most market activities were made more difficult, if not impossible,” says Lettieri.

Bradford Davy isn’t ready to declare victory or failure either. The director of regional engagement for Northeast Ohio’s Fund for Our Economic Future, Davy is involved with Opportunity CLE, a public-private initiative to match investors with opportunity-zone proposals. Most of the 23 proposals on Opportunity CLE’s website are still seeking funding. Often, Davy says, proposals in struggling markets like Cleveland don’t make capital sense, even with the opportunity zone incentive.

“It remains to be seen whether or not we’ve really moved the needle on the necessary projects in our neighborhood,” says Davy. “In places like Cleveland, anyone who says that we’re winning is wrong. We aren’t winning.”