No stimulus: limited gains for stocks

In the past month, the dynamics in the US equity market have clearly shown how vulnerable are risky assets in the near term as the economy is running out of stimulus. Firstly, we saw that the Fed’s balance sheet has stabilized at around USD 7tr in the past few months, which could eventually be perceived as a tightening policy in the current environment and result in an important drawdown in equities. Figure 2 (right frame) shows that the rise in the titanic rebound in the S&P 500 in the past few months was mainly driven by the mega-cap growth stocks (FANG+) amid the massive liquidity injections from the major central banks. The ‘bottom 490’ stocks are still trading at a 10% to 15% discount relative to their February highs.

The second risk is that as the unemployment benefits expired in July ($600 weekly federal supplement), there has been a lot of delays in federal assistance under the Lost Wages Assistance program, which pays $300-a-week federal supplement in unemployment benefits (with an extra $100 from the state). Not only has the federal assistance been halved in the past month but also a significant number of low-income earners are not eligible for the “new scheme” as there is a restriction that eligible recipients must be getting at least $100 a week in state unemployment insurance benefits. As it is estimated that over 6% of the 13 million people collecting unemployment insurance currently receiving benefits get less than $100 a week, nearly 1 million of Americans will not receive the extra $300.

This will clearly be reflected in US fundamentals in the coming months and, therefore, increases the risk of a choppy markets in the medium term.

In addition to the lack of stimulus, the closely contested elections could result in higher price volatility in the final weeks of 2020. Morgan Stanley has recently computed the average performance of the S&P 500 before and after each election day since 1960, excluding the performance of equities during the Great Financial Crisis in 2008 (figure 2, left frame). It is interesting to see that while US equities tend to outperform the long-term average when uncertainty over the election results is low, the performance of US stocks during ‘close elections’ is generally poor.

In addition, there is also a lot of uncertainty over Brexit and rising political risk in the Euro area amid governments choosing to run very ‘restrictive economies’ for the next 6 months. Figure 2 (right frame) shows that the global Economic and Policy Uncertainty (EPU) index has been rising in recent months and is currently pricing in an elevated price volatility.

No fundamental backing US equities

The world trade data clearly prices in a sluggish outlook for global growth in 2020; in addition, the recent surge in the economic surprise indexes may be misleading this time as most of the world was in shutdown in the second quarter. South Korean exports, which we use as one important leading indicator for risky assets (as SK is highly dependent on exports), have not rebounded and, therefore, is not pricing in a pickup in earnings. Figure 2 (right frame frame) shows that SK exports have strongly led world equities by 3 months in the past 20 years.

Analysts have recently been looking at the massive rise in business surveys such as the ISM manufacturing PMI, which has rebounded to 56 in August, its strongest level since November 2018. The problem is that the ISM has historically been very sensitive to equities performance; figure 3 (left frame frame) shows a strong co-movement between the S&P 500 and the ISM manufacturing PMI in the past 30 years.

We are convinced that ‘real’ fundamentals such as retail sales will start to deteriorate in the last few months of 2020, which will increase the uncertainty in the market.

US equities outlook: stimulus or freefall

As there are no fundamentals backing US equities, we are convinced that US policymakers will start to intervene massively in order to prevent the market from falling. As we have argued in the past, we think that the Fed has become an ‘anti-selloff’ body that cannot let equities fall too much as it would have a dramatic impact on the economy. Hence, Congress will have to agree very quickly on a ‘new stimulus’ plan in the near to medium term to prevent any signs of stress in the market.

However, we remain extremely cautious on US in the near term as long as hopes of a new stimulus remain uncertain. Figure 4 shows that the S&P 500 got strong support at 3,210, which also represents the 100D SMA, after retracing by 10 percent in September. Investors rushed to buy-the-dip again as they took the bear retracement as a new opportunity to go long. We still think that US equities could retrace lower in the near term, and we will only be comfortable to be long equities if we see a rising stimulus.

At this stage, US equities are mostly relying on fiscal and monetary policy. 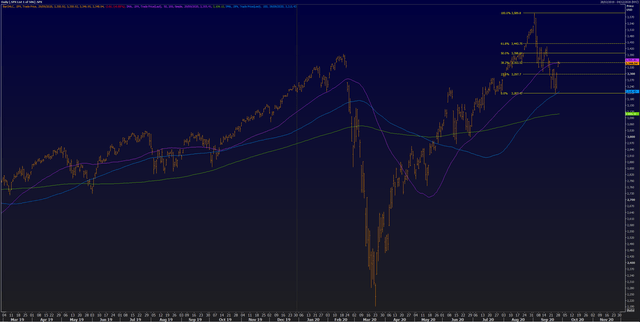 Disclosure: I am/we are long USDCHF. I wrote this article myself, and it expresses my own opinions. I am not receiving compensation for it (other than from Seeking Alpha). I have no business relationship with any company whose stock is mentioned in this article.