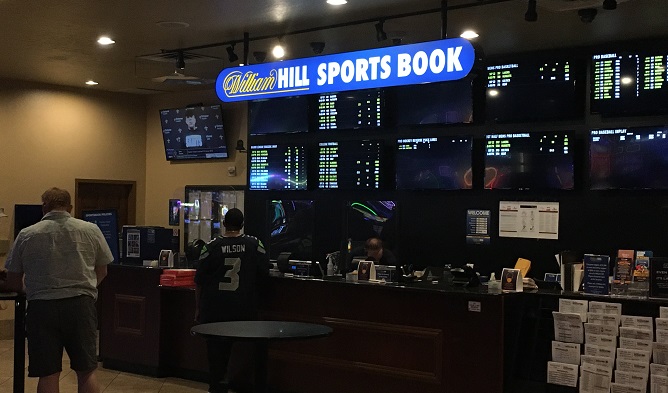 Sports fans across the country are showing more willingness to take a financial interest in the outcome of games, and in 18 states that allow sports betting, they may not even have to leave their couch to do it.

In two years since the U.S. Supreme Court ruled against the Professional and Amateur Sports Protection Act, the gaming industry has seen a widespread trend of casino operators partnering with tech companies that offer online and mobile betting platforms.

Penn paid about $163 million in cash and convertible preferred stock to become Barstool’s exclusive gaming partner for up to 40 years. The company also gained the right to use Barstool’s brand for all of Penn’s online and retail sports betting and internet casino games.

“The partnerships you see developing between operators, teams, leagues and the media are a natural evolution of how sports betting is rolling out throughout the United States,” said Brendan Bussmann, partner and director of government affairs for Las Vegas-based Global Market Advisors.

Going forward, wagering will become part of sports culture, he added. Even before the repeal of PASPA, sports fans and commentators talked about point spreads and money lines in their normal conversations.

Jay Snowden, president and CEO of Penn National, said the partnership with Barstool Sports reflects the company’s strategy to evolve from a regional gaming operator with 41 properties in 19 states to a “best-in-class omnichannel provider of retail and online gaming and sports betting entertainment.”

“With 66 million monthly unique visitors, we believe the significant reach of Barstool Sports and loyalty of its audience will lead to meaningful reductions in customer acquisition and promotional costs for our sports betting and online products, significantly enhancing profitability and driving value for our shareholders,” he said.

Founded by David Portnoy in 2003, Barstool Sports reaches a primary audience of millennials and Generation Xers with original content through blogs, podcasts, radio, video and social media. In 2019, the company grew revenue by 65 percent to nearly $100 million from advertising, ecommerce, licensing, events and subscriptions.

“ESPN is one of the pre-eminent brands in sports,” said Ulrik Bengtsson, group CEO of William Hill. “Tens of millions of fans will now have a direct link to our sports betting apps and odds.”

In a move to cement the partnership, Caesars has invested $3.7 billion to take over William Hill, outbidding Apollo global Management as a rival suitor. U.K.-based William Hill confirmed Bloomberg’s report that both Caesars and Apollo had made offers.

In early September, William Hill finalized its acquisition of CG Technology, which operated sportsbooks at The Venetian, Palazzo, Cosmopolitan and Silverton casinos in Las Vegas, after the deal was approved by Nevada Gaming Control Board.

If there were any worries about the pandemic shutdown’s effect on sports gambling, they vanished when the NFL kicked off its 2020 season and bettors flocked to sportsbooks for action.

Boyd Gaming timed the launch of its new B Connected Sports betting app with the start of the NFL, upgrading its betting experience with IGT’s PlaySports technology that offers pre-game and in-game wagering on football, baseball, basketball, hockey and other sports, both in the United States and overseas.

The upgraded app lists dozens of proposition bets for each sporting event, along with in-game wagering for big games. The app’s user-friendly platform updates sports betting odds in real time and calculates payouts on each betting option.

“Mobile and in-play sports betting are more popular than ever, so the new and improved B Connect Sports app comes at the perfect time,” said Bob Scucci, Boyd’s vice president of race and sports.

Century Casinos (CNTY) partnered with Las Vegas-based Circa Sports as one of its internet sports betting operators in Colorado. The Circa Sports mobile sports betting app operates in association with one of Colorado’s master licenses for sports wagering held by Century’s subsidiaries.

Century also finalized an agreement with bet365 in May to bring on a second internet sports betting operator partner in Colorado. Financial terms simulate those with Circa Sports.

In July, MGM Resorts International formed a joint venture with GVC Holdings to launch BetMGM, a sports betting and online gaming platform that has become the official sports betting partner of the Las Vegas Raiders, along with the NBA, NHL, PGA and NASCAR.

BetMGM has exclusive access to all land-based and online sports betting in the United States, online casino gaming and poker tournaments, and other interactive digital games.

The formation of the joint venture significantly increases speed to market for both parties, lowers execution risk and creates “meaningful early mover advantages,” MGM said in a company statement.

“Where there’s opportunity for sports teams and leagues in this space is first and foremost sponsorship,” said Bussmann of Global Market Advisors, with additional dollars coming from ticket sales, merchandise and other fan engagement.

Operating margins vary by state, the gaming consultant noted. With a gaming tax rate of 6.7 percent, Nevada has completely different margins than Pennsylvania, where the tax rate is 36 percent.

“The biggest variable is marketing costs,” Bussmann said. “You see that with Fan Duel and Draft Kings.”

Meanwhile, powerful alliances, spanning key verticals of technology, hotels & casinos, and media are forming to carve out swarths of market share in this attractive, high growth, high margin market opportunity in sports gaming. It will be epic battle of the titans for dominance in sports gaming.

Growth and Value edge to the Sr Gaming Index

The Singular Research gaming index trades at a significant discount to the S&P 500 : as of 10/1/20 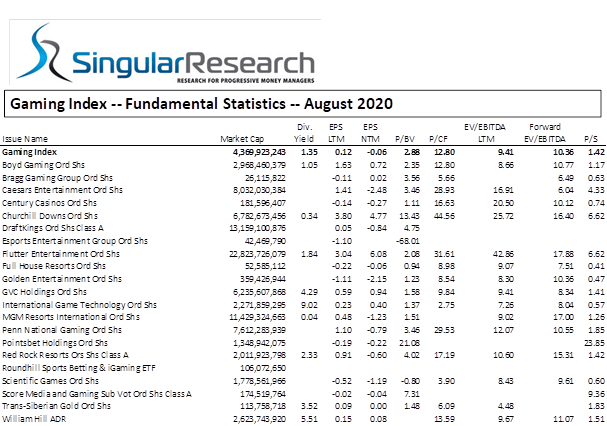 Best of the Uncovereds offers new initiation reports on roughly two dozen companies per year, with a focus on under-followed small and mid caps with significant potential. We provide a quarterly earnings update reports on all companies covered, as well as flash reports on significant news announcements by companies. We go further for members, providing recorded interviews with management teams of covered companies when available and a monthly quantitative based “Market Indicators and Strategy Report.”

Disclosure: I am/we are long DKNG.