The companies will use Hino’s new XL Series chassis and Toyota’s fuel cell technology to deliver “exceptional capability without harmful emissions,” according to an announcement Monday. The collaboration expands on an existing partnership to develop a 25-ton fuel cell electric truck for the Japanese market, which was announced earlier this year.

The first demonstration vehicle is expected to arrive in the first half of 2021, Toyota said.

“A fuel cell powered version of the Hino XL Series is a win-win for both customers and the community. It will be quiet, smooth and powerful while emitting nothing but water,” said a statement from Tak Yokoo, senior executive engineer at Toyota Research and Development.

Toyota and Hino have been working on hydrogen fuel cell technology for 20 years and see it as a zero-emissions alternative to battery power for large commercial vehicles. The companies conducted joint demonstration trials of a fuel cell bus in 2003.

In the U.S., it assembles medium-duty trucks in Mineral Wells, W.Va. Its plant in Marion, Ark., produces axles and suspension components for Toyota’s Tacoma, Tundra and Sequoia.

Toyota isn’t the only automaker working on fuel-cell-powered trucks. Two weeks ago, Mercedes-Benz unveiled a hydrogen-electric semitruck that it touted as the future of long-haul transport.

Mercedes said its truck will be able to cover a distance of more than 620 miles, a distance comparable to diesel trucks. Hyundai and Nikola also have shown off fuel-cell trucks.

Tesla, the sales leader in electric cars, is working on a battery-electric semitruck that is expected to be built at a new assembly plant planned for Austin. 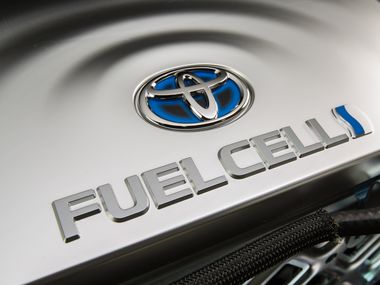