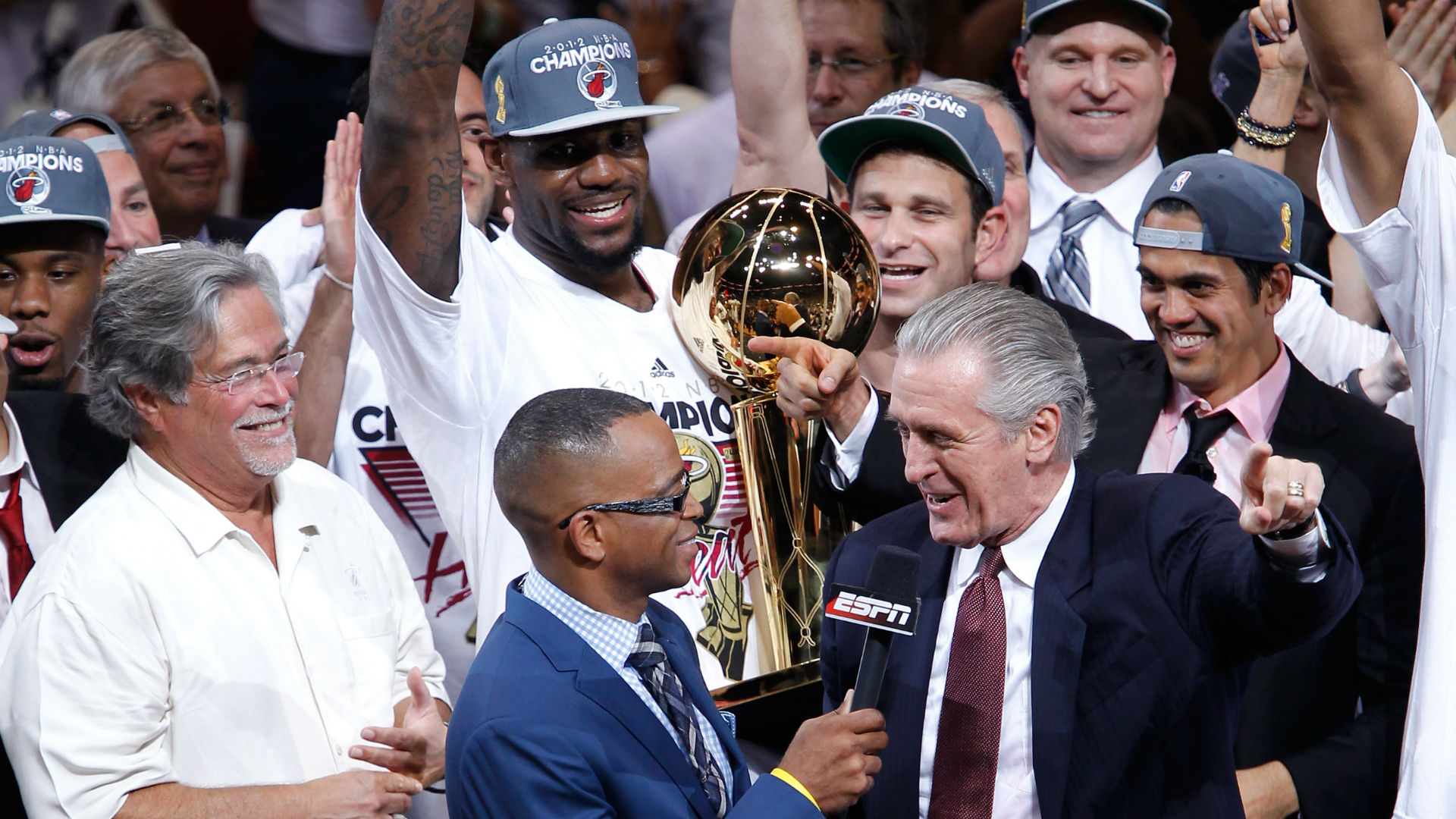 “Both of those guys, of course, they want to beat each other. Why wouldn’t they?”

Those were the words of Dwyane Wade when asked by ESPN’s Stephen A. Smith about the possibility of LeBron James’ Lakers meeting Pat Riley’s Heat in the 2020 NBA Finals. The former Miami superstar attempted to downplay any sort of rivalry because Riley is the Heat’s president, not their small forward. As Riley has often said, “Keep the main thing the main thing,” and that’s basketball.

And yet, while Riley won’t have any direct impact on James’ stat lines in the upcoming series, you can bet there will be some added motivation to win for both sides.

James had four incredibly successful seasons as a member of the Heat, capturing back-to-back championships and MVP awards in 2012 and 2013. During his time in Miami, James went from the most reviled figure in the NBA after “The Decision” to crush the hearts of Cavaliers fans and a confounding 2011 Finals performance to someone who had widely earned respect as the undisputed best player in the world.

When it came time for the James-Riley relationship to end, though, it was not exactly a smooth landing.

The Spurs dominated the Heat in the 2014 NBA Finals, sending Miami home in five games. That surprisingly efficient elimination kickstarted yet another “Summer of LeBron” with questions about where he would land in free agency.

In his annual end-of-season news conference, Riley addressed the speculation with a bold statement that appeared to be aimed at James, as Wade and Chris Bosh had both already indicated that they would like to stay with the Heat.

“This stuff is hard. And you got to stay together, if you’ve got the guts,” Riley said. “And you don’t find the first door and run out of it if you have an opportunity.”

Riley also noted that James had the right to do whatever he wanted and take his time with the decision, but the challenge was clear. Unfortunately for Riley and the Heat, James chose to head back to Cleveland.

Years later, Riley told ESPN’s Wright Thompson that he had to be talked out of going scorched earth like Cavs owner Dan Gilbert, who infamously sent out a scathing letter after James revealed that he would be taking his talents to South Beach in 2010.

“I was silent,” Riley said when describing the call from James informing Riley that he was not re-signing with the Heat. “I didn’t say anything. My mind began to just go. And it was over. I was very angry when LeBron left. It was personal for me. It just was. I had a very good friend who talked me off the ledge and kept me from going out there and saying something like Dan Gilbert. I’m glad I didn’t do it.”

In a 2019 interview with ESPN’s Dan Le Batard, Riley admitted that he was extremely upset with that call because he saw “a dynasty fly out the window.”

“I didn’t blame [James], but I knew that that was a 10-year team,” Riley said. “It was just a sad day for me and for our franchise because I wanted that dynasty. I wanted this city and this team to go 10 years and maybe be in the Finals eight times. I don’t know how many championships we would have won. I don’t have any rancor towards him at all.”

After falling short in the 2015 Finals, James led the Cavs to the 2016 championship despite falling behind 3-1 to an all-time great Warriors team. His competitive spirit and the goal of bringing a title to Cleveland was incentive enough to keep the Akron native locked in throughout that season, but it turns out there was an additional factor pushing him along the way.

His stint in Miami made him a two-time champion, but it also made him feel unappreciated on his way out the door. Ever since James left the Heat, the way his exit was received there nagged at him. …

“When I decided to leave Miami — I’m not going to name any names, I can’t do that — but there were some people that I trusted and built relationships with in those four years [who] told me I was making the biggest mistake of my career,” James told ESPN.com just outside the Raiders’ locker room.

“And that s— hurt me. And I know it was an emotional time that they told me that because I was leaving. They just told me it was the biggest mistake I was making in my career. And that right there was my motivation.”

One could guess that one naysayer was Heat president Pat Riley, who in not-so-subtle fashion took a dig a James a year ago when he said his franchise was free of “smiling faces with hidden agendas.”

For what it’s worth, Riley cooled off over time. He told “The Soul of Basketball” author Ian Thomsen that he had not contacted James after his departure until the epic Game 7 between the Cavs and Warriors. Riley sent James a simple text message during that contest: “Win this and be free.”

“While there may have been some carnage always left behind when he made these kinds of moves, in Cleveland and also in Miami, he did the right thing,” Riley said. “I just finally came to accept the realization that he and his family said, ‘You’ll never, ever be accepted back in your hometown if you don’t go back to try to win a title. Otherwise someday you’ll go back there and have the scarlet letter on your back. You’ll be the greatest player in the history of mankind, but back there, nobody’s really going to accept you.'”

Now, more than six years after James left Miami behind, he must go through the Heat to win his fourth championship. And if Riley wants to add another Larry O’Brien trophy to his collection, his players must find a way to stop James and the Lakers, a franchise Riley guided to multiple titles as a head coach in the 1980s.

Los Angeles might be the heavy favorite in this bout, but there is no doubt that this Heat group possesses Riley’s fighting spirit.

“[Riley] didn’t assemble this team for us to just play 82 games and go home,” Heat center Bam Adebayo said after Miami clinched its spot in the NBA Finals.

Yes, Adebayo, Jimmy Butler and Goran Dragic will have far more impact on the outcome than Riley. Still, the NBA’s “Godfather” will be looming over this series, and he undoubtedly wants a bit of revenge. LeBron does, too.

They want to beat each other. Why wouldn’t they?